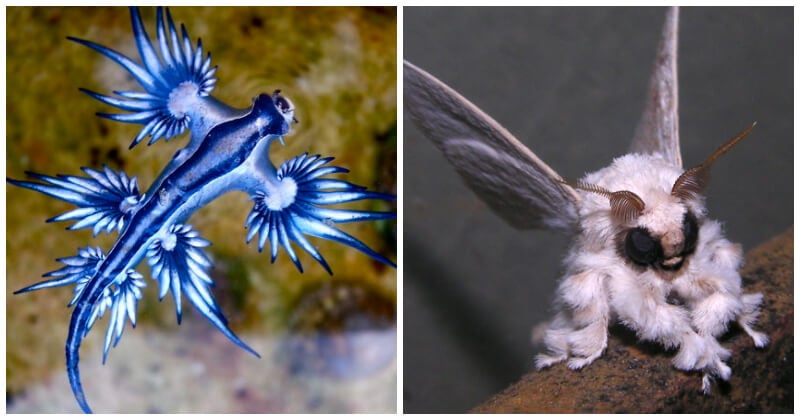 The world is home to over 8 million species of beings and it is no wonder that there are many of them you have never seen or heard of. From dense jungles to deep and vast oceans, there are countless species of animals with weird looks or unusual features and behaviors that will definitely blow your mind. If you are curious about the most bizarre animals in the world, this post is a must to read.
In this post today, we’ve compiled the 10 strangest animals on the earth from land and sea species, mammals to reptiles, and also insects. You can be overwhelmed by a bat with a leaf-shaped nose, a mammal with a pink shell, or a creature that seems like a giraffe and gazelle crossbreed. Scroll down now! Certainly, you will end up uttering: “How can these incredibly wacky creatures live on the same planet as us!” Known as the Caribbean white tent-making bat, Honduran white bat is distinguished by a distinctive white fur, a yellow leaf-shaped nose and ears, and a black membrane on its wings. They nest in leaf ‘tents’ built by cutting along the veins of the leaf with their teeth. Native to the southern coast of Australia, the leafy seadragon is a marine fish with long leaf-like protrusions sprouting from all over the body that allows them to perfectly camouflage in the seagrass beds and the rocky reefs. As the smallest of the armadillo family with a body length of five to six inches, this strange creature was found in the sandy plains of Argentina. A pink dorsal shell and silky yellowish-white fur set the Pink Fairy Armadillo apart. Most likely, you’re trying to decide if it’s a gazelle or a giraffe. A long-necked antelope with slender limbs, a wedge-shaped head, and round eyes is what Gerenuk actually is. Found in Africa and also called as giraffe gazelle, the animal spends much of its time foraging and feeding. Known as a blind crab in deep seas, Kiwa hirsuta or Yeti crab owns silky long, pale yellow setae covering its legs and claws. This creature’s hairy legs earned it the moniker of Yeti, the name of the hideous snowman of the Himalayas. If you suppose Okapi is a cross between a deer and a zebra, you are mistaken. In spite of its zebra-like stripes, it is the only living relative of the giraffe and originates from the Democratic Republic of the Congo in Central Africa. Okapi is distinguished by the thick and oily brown fur that allows it to stay dry in the rain.

The list of the most weirdest-looking animals would not be complete without mentioning star-nosed mole. You can find this creature in wet low areas in the northern parts of North America. Featured with a star-like nose, the species is astonishingly speedy and has a good reputation for being the fastest eater in the world. Discovered on the island of Madagascar, Aye-aye is the world’s largest nocturnal primate distinguished by a bushy tail that is larger than its body. In order to feed, this odd creature taps on trunk then rips away the bark and and gobbles up the bugs. Despite its creepy name, it is not a hideous monster but a weird-looking creature found in Australia. This creature, often known as the “thorny dragon,” is actually a lizard that is colored in camouflaging tones of desert browns and tans that vary in intensity from light to dark depending on the season. One-Eyed, Four-Eared Kitten Finally Found The Loving Home That He Always Longed For