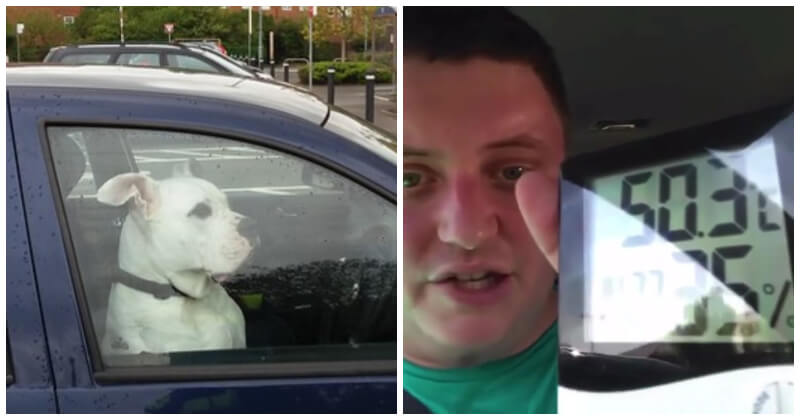 “If you see a dog in distress inside a hot car, call 999 immediately” – The RSPCA recently posted a video to their official TikTok account illustrating the suffering endured by pets left abandoned inside scorching vehicles. It received more than 75K likes and many comments thanking the officer for raising awareness of such a tragic issue.

Summer is a time when pet owners must take extreme precautions

As a way to show how dogs suffer during hot weather, this RSPCA officer trapped himself in a car Source: @oakhamuk (not the actual photo)

The officer stated that he would prove how dangerous it is to be locked inside a car in hot conditions. A little bit over 23°C (around 73°F) was the temperature inside the car at the start of the experiment, an update will be provided every few minutes, the man said. Just on the fifth minute, he explained that while attempting to record a three-minute video, the camera had some issues due to being too hot, it was 95°F, and it had to be shifted to work again.

In the end, the temperature reached 110°F, according to the man. A few minutes after the timer crossed 15 minutes, the RSPCA officer’s hands turned bright red, and he was soaked in sweat. The temperature rose over 122°F when the 17-minute mark came around. He hoped this was an eye-opener for pet owners who assume their dogs can handle this environment. This short period of time is not even as long as a shopping trip. In terms of recommended actions that passersby should do if they see a dog stuck in a hot car, A RSPCA representative, Suzanne Norbury, said, “When reporting incidents relating to specific dogs being left in hot cars, we always urge people to dial 999 and ask for the police, as they can often attend much more quickly than ourselves. Additionally, police officers also have the power to enter a vehicle to remove an animal from danger.” The woman then continued: “If the situation becomes critical for the dog and the police are too far away or unable to attend, many people’s instinct will be to break into the car to free the dog. It’s only natural for animal lovers to take action when they see a dog in distress in a hot car.”
“We urge people to tell the police what they intend to do, why, and to take images/footage of the dog and the names and numbers of witnesses to the incident, in case they need to defend their actions later.” There still isn’t the exact number of dogs who have died in heat-related cars. Sadly, each year we learn about dogs that have passed away as a result. Hence, we would appreciate it if you saved this and shared it with your network!

Orphaned Baby Elephant Learns How To Hold Milk Bottle With His Trunk, And It’s Adorable

20+ Photos Of Cats Being Silly And Doing Funny Things