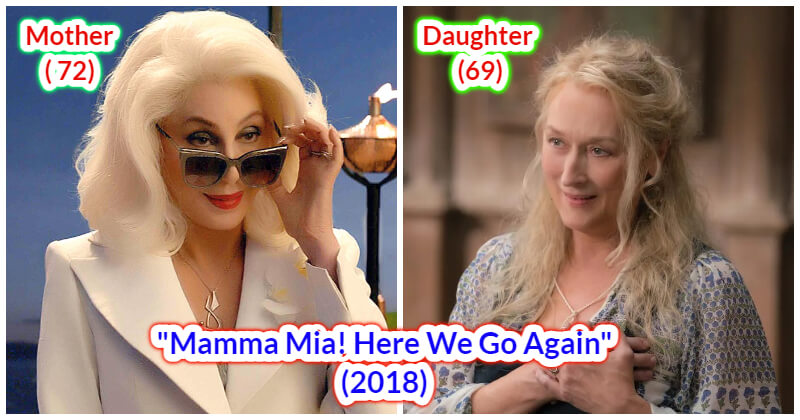 In reality, the usual age for a woman to have a marriage is 20 to 25 and the appropriate time for her to have a child is about 26 to 27. So it means the normal age gap between a mother or a father and their child should be over 20 years. However, in the movie, thanks to the makeup artists and the masquerade art, sometimes the actor who plays the mother role is younger than the actor who plays the daughter or son role. Everything can happen in a movie, as long as we know how to fake it, right? Let’s see what age gaps will make you surprised! #2. In Six Feet Under, Frances Conroy was just 12 years older than Peter Krause, who plays her son. #3. In Golden Girls, Estelle Getty was one year younger than Bea Arthur when she played her mom. #6. In General Hospital, the age gap between Genie Francis and Tyler Christopher, who played her onscreen son, is just 10 years. #9. There was only a 10-year-gap between Sally Field and Tom Hank, although they played mother and son in Forrest Gump. A few years ago, in another film, Sally even played Tom Hank’s love interest #10. In The Fresh Prince of Bel-Air, Janet Hubert is just 10 years older than Karyn Parsons, who played her daughter’s role. #11. Monique and Countess had only an 11-year age gap, although they played mother and daughter in The Parkers. #12. Belita Moreno is only eleven years older than George, and she played his mother in The George Lopez Show. #13. In the 2009 Star Trek, Winona Ryder played Zachary Quinto’s mother, although she is only six years older than him. #14. This case will take you aback when the father is younger than the son. Lee Pace is two years younger than Orlando Bloom, although Pace played Boom’s father in The Hobbit.

#15. In Alexander, Angelina Jolie is just one year older than Colin Farrell when she played his mother. #16. There was only a six-year gap between Len Cariou and Tom Selleck, although they played father and son in Blue Bloods. #17. Amy Poehler is only seven years older than Rachel McAdams, and she played her mother in Mean Girls. #19. There was only a seven-year gap between Andrea Navedo and Gina Rodriguez, even though they played mother and daughter in Jane the Virgin #20. This case will leave you speechless. Mandy Moore (36) is younger than all of the actors who play her daughter and son in This Is Us.

#21. In Orange Is the New Black, Elizabeth Rodriguez is just two years older than Daschle Polanco, who played her daughter. 15+ Actors Who Became Unrecognizable For A Movie Role, Proving The Power of Makeup