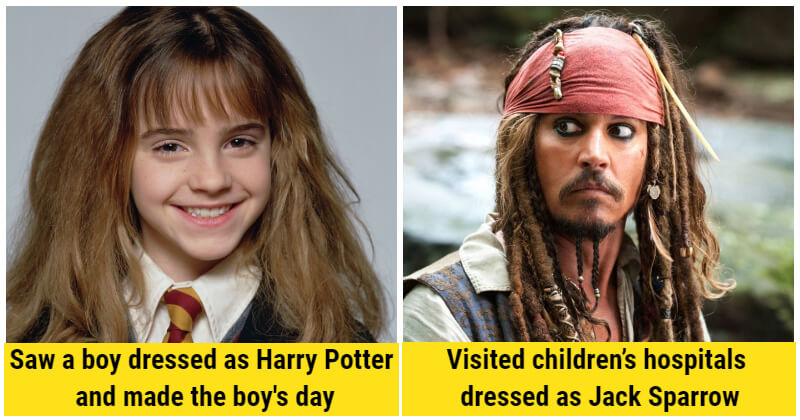 There’s no surprise that stars have very tight schedules, including movie projects or performing tours all around the world. These celebs have multiple works and fulfillments at the same time that they sometime can’t notice much more things surrounding them. Celebrities are known for ignoring their fans who might ask them for a signature or a photo. Perhaps the stars think it’s not a good time to communicate with their fans, but some celebs can’t truly miss this because of their too busy schedules. There are too many things that they need to keep in their mind and so many people come to them. That’s an embarrassing situation!

However, some celebrities have beautifully done these toughest challenges. Some of them even buy presents or food for their fans, while others made someone’s day with only their kindness. These celebrities have proven that they are not only talented but also warm-hearted to anyone in their life. Indeed, if we were them, no one wouldn’t be sure whether we could do the same.

Today, we would love to tell you about some celebrities who steal our hearts with their kindness in the most challenging moments. Source: © The Lord of the Rings: The Two Towers / New Line Cinema and co-producers

The actor rose to stardom with his role in The Lord of the Rings trilogy. In the movie, Aragorn and his horse, Brego, are loyal friends. In real life, this story comes true when Mortensen took the horse with him after finishing the shooting process.

Mortensen also had a gift for Liv Tyler’s stunt double. The girl loves the horse she is working with, but she cannot buy it, because the animal is too costly. So the actor bought her a horse. Johnny Depp loves to wear Jack Sparrow costumes. He did just that when he received a letter from a 9-year-old girl. She requested the actor to come to her school. Depp arrived at school dressed as the legendary captain.

After that, Depp invited the girl to accompany him on the red carpet at the premiere of Pirates of the Caribbean: On Stranger Tides in London. The child was really happy. The actor also visited children’s hospitals in Jack Sparrow costumes. Lady Gaga really loves her fans. In 2017, she was forced to cancel a concert in Montreal because of a bad cold after performing in bad weather in another city. In order not to offend her fans, she bought them pizza and sent them her autograph.

But this wasn’t the first time Lady Gaga has bought something delicious for her fans. In 2009, she gave away pizza to everyone waiting in line for her autograph. Kate Winslet once saved an elderly woman from a burning house. Kate Winslet is staying at Richard Branson’s house and a fire started burning. According to the billionaire, Winslet carried his 90-year-old mother from the fire. When this Hollywood star was still an unknown comedian performing at a burger joint, he used to go to the laundromat. There, he met 87-year-old Elizabeth “Mimi” Haist, who lived in the store and made money from the tips customers would give her.

After the success of The Hangover, the actor didn’t go to the laundromat. But when he figured out his friend became homeless, he rushed to help her. He rented an apartment for her and continues to pay all her bills now. He also tookHaist to the premiere of The Hangover Part II and The Campaign. Ben Affleck’s 8-year-old son isn’t going to have a present for his birthday, but his favorite character, Kylo Ren, saved the day. Affleck is doing The Last Duel with Adam Driver. In a conversation with his colleague, the actor said that he is flying to his son’s birthday and that the child is a big fan of Princess Leia. That’s why Driver took the video as Kylo Ren and even signed the card.

Then he called Affleck’s assistant, found out the co-worker’s address, and sent the gift. And the good thing is that he did because the gifts his father bought for him were not delivered once. Ryan Gosling has the great ability to be in the right place at the right time. He once snatched a journalist right from under a car. A girl from England to America, where the rules of driving are different. It could have ended in tragedy if it hadn’t been for Gosling. In 2013, Beyoncé went to the store to get Christmas gifts. However, she’s not just buying presents for her friends and family – the star bought a visitor gift card for $37,500, along with an additional greeting card. And 750 people received gifts from the singer. In 2003, when Colin Farrell was filming The Recruit in Toronto, a local radio station offered $2,000 to anyone who could bring him to the set. The actor believed this is a great opportunity to help someone. He met a local homeless man and asked him to drive him to the radio station. A few years later, Farrell returned to Toronto, reunited with an old acquaintance, bought him clothes, and paid his rent. Source: © Harry Potter and the Goblet of Fire / Warner Bros. and co-producers

Emma Watson was walking around on Halloween when she noticed a boy dressed as Harry Potter. She got closer to him and asked, “Excuse me, are you, Harry Potter?” The boy said, “Yes.” Watson hugged him and said, “It’s great because I’m Hermione Granger, and we’re best friends!”

16 Celebrities Who Look Unrecognizable Without Their Iconic Hairstyles