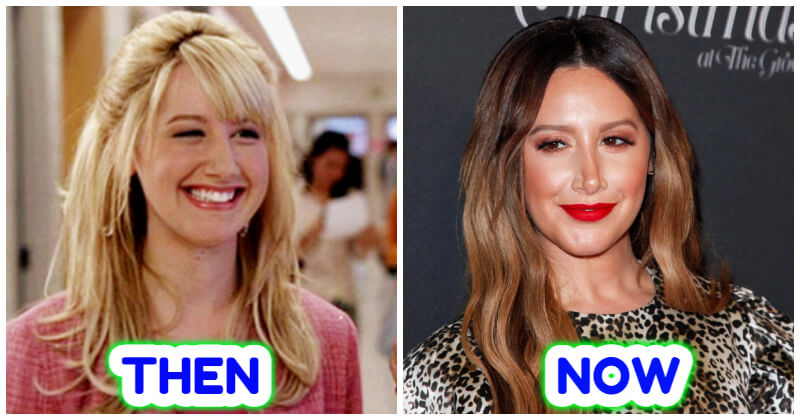 The route from Disney Channel child stars to adult superstars is evident. Countless Disney stars got their big start on Disney Channel. Eventually, these celebrities have become an important part of children’s lives all across the world, but where are they now?

Disney Channel performers have gone on to become some of the world’s most prominent actors, musicians, and artists.

Have you ever wondered what happened to the casts of Cheetah Girls, Christy Carlson Romano, The Brink, or Zenon: 21st Century Girl and The Luck of the Irish? Where have the other High School Musical actors gone? If you still have a soft spot for Disney films and the actors that brought them to life, you should check out what your favorite Disney Channel performers are doing these days. Here’s a look at how these young performers grew into adults. The Cheetah Girls were the Disney Channel’s attempt to create the next major female group. Raven-Symoné, Adrienne Bailon, Sabrina Bryan, and Kiely Williams play four friends who dream of becoming super-stars and starting their own group in the 2003 film. The film follows their disputes, rise to success, and lifelong friendship.

In 2006, a sequel was released, with all four stars returning. In 2008, the Cheetah Girls officially disbanded. Bailon dabbled with music and reality television. Bryan has appeared in a few television shows and films throughout the years, but he has largely kept a low profile. Williams starred in a couple films and released solo material. The DCOM’s The Thirteenth Year is about a teen who discovers the truth about his ancestors. Cody (Chez Starbuck), an adopted adolescent, discovers on his 13th birthday that he is a merman.

He eventually discovers who his genuine friends are after gaining fins and scales. Chez Starbuck didn’t last long in the acting world when his DCOM debuted. Among other things, he voiced a character in The Grim Adventures of Billy and Mandy and starred in the TV movie Recipe for Disaster.

Starbuck is now a painter living in Los Angeles. His work makes use of pop culture imagery. Even Stevens was one of the most popular sitcoms on the Disney Channel in the early 2000s, so it was only natural that it inspired its own film, The Even Stevens Movie, in 2003. Shia LaBeouf and Christy Carlson Romano returned as Louis and Ren Stevens, siblings with diametrically opposed personalities.

In the film, a family vacations on an island but ends up on a reality program. While Shia LaBeouf moved on to occasionally contentious prominence, Christy Carlson Romano’s career choices were far more under the radar. She performed in a few smaller films and TV shows, but she is best known for her work as the lead character in Kim Possible from 2002 to 2007. Romano also had her Broadway debut in 2004, as Belle in Beauty and the Beast, and as Kate Monster/Lucy the Slut in Avenue Q in 2008.

Romano has been married to Brendan Rooney since 2013, and their first child, a daughter, was born in late 2016. Rip Girls is a drama about familial relationships and a sense of location. Camilla Belle plays Sydney Miller, who travels to Hawaii with her father and stepmother. Sydney inherits a plantation and seeks to immerse herself in the local culture by learning to surf and meeting new people. Camilla Belle starred in one more TV project after Rip Girls, Back to the Secret Garden in 2001, before seemingly forsaking the medium entirely. She later appeared in a number of feature films, including The Ballad of Jack and Rose, When a Stranger Calls, 10,000 BC, and Push.

Belle dated Joe Jonas in 2008 after appearing in the Jonas Brothers’ “Lovebug” music video, but the couple split a year later. Taylor Swift, who Jonas allegedly left for Belle, allegedly penned a song called “Better Than Revenge” about Belle. Andrew Lawrence plays Will Browning, a poor student who unintentionally makes a smarter clone of himself in The Other Me. He sends the clone to school in his place, and he rapidly excels in both academics and social interactions.

Meanwhile, a group of scientists tries to kidnap the clone and return him to their facility. Andrew Lawrence was the voice of T.J. Detweiler on the TV sitcom Recess and its several movies when The Other Me appeared in 2000. Since then, he has appeared in a few guest roles and TV movies, as well as the occasional independent film. He has also provided his voice for video games such as Battlefield 4, Dead Rising 3, and The Amazing Spider-Man 2. He presently appears as a recurring character on Hawaii Five-0.

Lawrence is the younger brother of Matthew and Joey Lawrence, both actors. He’s a musician as well. For its investigation of race relations and discrimination, The Color of Friendship was a revolutionary Disney Channel original film. Piper Dellums, the African American daughter of a Congressman, is hosted for a semester by her family by Mahree Bok (Lindsey Haun), a white South African.

The film earned an Emmy Award for Outstanding Children’s Program in 2000. Shadia Simmons participated in a number of children’s shows following The Color of Friendship, including Are You Afraid of the Dark?, Quints, and Zenon: The Zequel. The Canadian actress has also been on Canadian television productions such as Strange Days at Blake Holsey High and Life with Derek.

She has a daughter and works at Star Acting Studios as a teacher and acting coach.

In the sequels, Halloweentown II: Kalabar’s Revenge and Halloweentown High, Marnie and Aggie work to keep the peace between the two worlds. Kimberly J. Brown appeared on Guiding Light from the 1990s through the mid-2000s, earning a Daytime Emmy nomination for her role as Marah Lewis. Brown also appeared in the AMC drama Low Winter Sun, which aired for one season.

Brown now performs at the famed improv theater Upright Citizens Brigade. After her former co-star Debbie Reynolds died in December 2016, she wrote a touching tribute to her. The Disney Channel debuted The Luck of the Irish, a St. Patrick’s Day staple, in 2001. Ryan Merriman plays a popular basketball player who discovers he is a leprechaun when his hair becomes red, his ears become pointed, and he begins to shrink.

Kyle must find the lucky coin that permits him and his family to pose as humans in order to reverse the damage. Ryan Merriman previously appeared in two DCOMs, Smart House and A Ring of Endless Light. Since then, he has appeared in a number of films, including The Ring 2, Final Destination 3, and 42. Merriman is also a TV regular, having played Ian Thomas on Pretty Little Liars from 2010 to 2014.

Outside of work, Merriman was married to Micol Duncan from 2004 until their divorce in 2011. In 2014, he married Kristen McMullen. If you’re curious, Merriman still mentions The Luck of the Irish on occasion. High School Musical is the most well-known DCOM. The original 2006 film is partially based on Romeo & Juliet, and stars Zac Efron, Vanessa Hudgens, Ashley Tisdale, Corbin Bleu, and many more. Troy (Efron) and Gabriella (Hudgens) test out for the high school musical, and fall in love despite their distinct social circles. Sharpay, the Drama Club president hellbent on ripping them apart, is Tisdale. Ashley Tisdale, like Zac Efron and Vanessa Hudgens, gained fame in huge films, but what happened to her? For a time, she continued to work on family-friendly projects, contributing her voice to Phineas and Ferb for many years. Tisdale remained on television, appearing on episodes such as Hellcats, Sons of Anarchy, Sabrina: Secrets of a Teenage Witch, and Ginger Snaps.

Outside of playing, Tisdale worked as a creative director for the apparel company Signorelli and debuted her own line in 2016. In 2014, she married Christopher French.

Brandon Baker starred as Johnny Kapahala in the 1999 Disney Channel film Johnny Tsunami. It follows Johnny, a Hawaiian-born surfer, as he travels to Vermont and must adjust to his new circumstances. Kirsten Storms, a DCOM favorite, also appears in the film.

Baker returned to the film’s sequel, Johnny Kapahala: Back on Board, in 2007. Brandon Baker also appeared in the NBC sitcom One World at the time Johnny Tsunami was released, as well as other Disney properties such as Even Stevens and The Proud Family. Baker, on the other hand, remained relatively quiet following it. Kirsten Storms starred in Zenon: Girl of the Twenty-First Century and its sequels, Zenon: The Zequel and Zenon: Z3. The actress played the titular role, a teenager who is “grounded” on Earth after residing on an orbiting space station.

Zenon saves a group of homeless aliens and competes in a teen competition in the sequels. Despite Zenon’s success as a Disney Channel series, Kirsten Storms never appeared in a feature picture. She instead concentrated on television, where she played Bonnie Rockwaller in Kim Possible for five years. She first appeared on the soap opera General Hospital in 2005 as Maxie Jones, for which she received a Daytime Emmy Award nomination in 2009.

She had to leave the show for a while after being diagnosed with endometriosis in 2011, but she returned a year later. Harper, Storms’ daughter, is her only child. Erik von Detten starred in the 1998 DCOM Brink! The actor portrayed Andy “Brink” Brinker, an in-line skater who competes for fun rather than money but is forced to choose a choice when his family runs into financial difficulties. After Brink!, Erik von Detten appeared in a number of family-friendly films, including So Weird, The Wild Thornberrys, As Told by Ginger, Recess, and The Legend of Tarzan. He originally voiced Sid in Toy Story, then he returned to voice Sid as an adult in Toy Story 3.

Von Detten appears to have abandoned Hollywood for the time being. In 2016, he returned to the red carpet for the premiere of Adventures in Babysitting, the 100th DCOM. Von Detten attended the screening with his niece and nephew. Hilary Duff was a great Disney celebrity in the early 2000s, playing the plucky title character in Lizzy McGuire. She also appeared in the DCOM Cadet Kelly, a comedy about a girl who transfers to a new town and is compelled to enroll in a military school, at the time.

Christy Carlson Romano, a Disney Channel regular, also appears as a cadet captain in the film. After leaving Disney, Hilary Duff had a quiet few years. She kept making music, albeit with less success than before. She appeared as a guest star on several series before winning the part of ambitious editor Kelsey Peters on TV Land’s Younger.

On the personal front, Duff has one kid, Luca, with her ex-husband Mike Comrie.

14 Actors Who Were Unrecognizable Under Bizarre Makeup