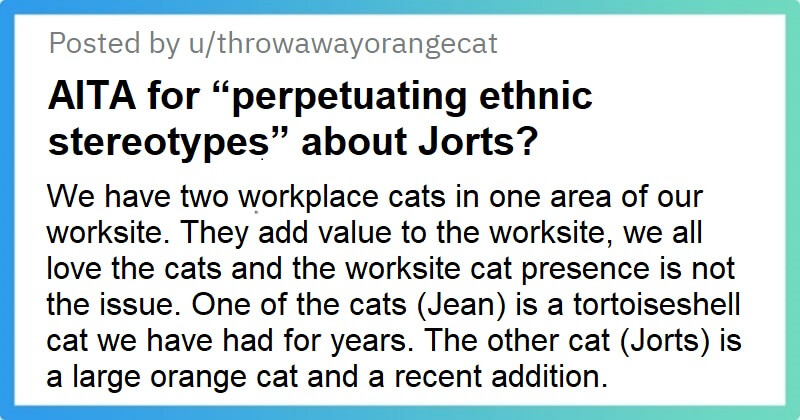 A Reddit user raised a viral topic on AITA (Am I the Asshole) community when he shared a story that he was accused of “perpetuating ethnic stereotypes” about an orange cat while all he did was just speak the truth.

The story goes that the man’s workplace has two cats: Jean – a cleverer one and Jorts, an orange one who is not the brightest bulb in the box.

For example, Jorts can’t open a door even when it’s ajar- he shoves it whether he is going in or out. He is often trapped inside the place he is trying to exit and needs others to rescue him.

So, Pam, one of OP’s colleagues, came up with the idea to train Jorts. While OP opted for a more practical solution, he installed door stoppers. On the flip side, Pam claimed that these things just take away the chance to learn to open doors from him. She even drew up a series of training activities for him, and put these tasks on the whiteboard.

Things started to go south when OP joked that Jorts will never be as smart as Jean and that triggered Pam. After that, she left work early and accused the OP of being racist toward the cat, AND demanding him to take up a racial sensitivity course. This whole situation prompted the question on the subreddit. Even HR had to be involved, who talked to both Pam and OP, and delivered a solution.

HR was concerned about Pam’s comparing ethnic stereotypes with giving a cat a doorstop and they addressed that which went well.

OP did end up apologizing for all of the comically harmless shaming he did with Jorts and emphasized that bullying a colleague is never cool.

About Pam, she learned that there had to be some line-drawing with Jorts. She’s not in charge of the cats. Pam also promises not to put cups on Jorts’ head intentionally (in order to put him into frustrating situations given his unique needs) or put margarine on Jorts to groom him.

This post received 8.3k votes and almost 900 comments from the Reddit community, with so many Redditors taking the OP’s side.

Other Redditors suppose that Pam is ableist toward Jorts by doing the training.