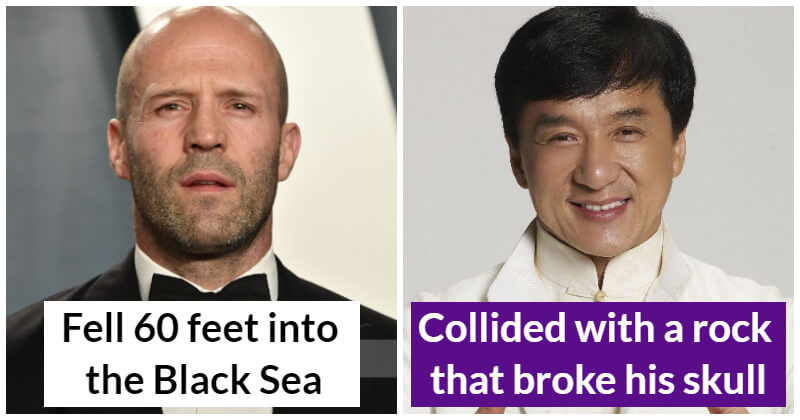 Many people think acting is a cushy job, which asks actors to memorize a few lines, get their makeup done, and then take their big fat paycheque home after a few months of work. If they get lucky, they may earn the most glorious Hollywood awards, bringing them future fame and fortune. Some people even think that if these actors can do it, they can make it gracefully.

However, being a Holly star isn’t as easy as many think. Multiple obstacles are bound to stumble along the way while actors are filming, including a brush with death. In fact, many Hollywood stars died while filming in the past. And Paul Walker is notably an example. Indeed, accidents can happen in strange and unpredictable ways that no one can 100% guarantee the safety of actors. As a result, stunt performers who do the dangerous scenes for actors play an essential role in a film crew.

Still, many potential risks aren’t easy to figure out and almost lead our actors to death. Here are some Hollywood stars who nearly died during the shooting. Tom Cruise has had numerous near-death experiences since he started his acting career. One of them is a scene in Mission: Impossible- Fallout. He nearly killed himself while filming an iconic helicopter scene.

In that scene, Cruise was required to lose his grip on a helicopter. Later, he fell onto the cargo lifted by it. Although he had a safety harness, it was a challenging stunt that could have ended the actor’s life. Johnny Depp barely escaped death while shooting The Lone Ranger. The actor who fell off a galloping horse was stomped and dragged for nearly 30 yards through the desert. Fortunately, the actor didn’t suffer any severe injuries.

The director Gore Verbinski revealed New York Post that Johnny Depp was one of the scariest accidents he’s ever seen.

#3 Michael J. Fox (Back to the Future Part III) Michael J. Fox nearly died while portraying his most famous role Marty McFly in the Back to the Future series. He was definitely suffocating when Buford “Mad Dog” Tannen hanged his character.

Because of the misplacement of his hands during the stunt, Fox was hung by a noose for real. And the film crew didn’t realize the unlucky predicament until he passed out for around 30 seconds. Jackie Chan is always willing to play his stunts. While shooting Armour of God, he jumped from a wall to a tea branch that snapped and had a nasty fall of five meters. His head collided with a rock that broke his skull and immediately required surgery.

Due to the unfortunate stunt, Chan has a slight hearing loss in one of his ears and a permanent hole in his head associated with a plastic plug. Jennifer Lawrence was on the verge of being choked to death by a malfunctioning fog machine while filming the first installment of The Hunger Games.

Unluckily, the fog machine broke, and the subsequent overload made dense smoke that caused the cast members scarcely visible. All the actors, including Lawrence, began aggressively coughing but narrowly survived suffocation.

Apocalypse Now was regarded as one of the movies infamous for its troubled production. The harsh shooting conditions took a tremendous toll on leading movie star Martin Sheen who had a nervous breakdown and a near-fatal heart attack when he was on set.

“I completely fell apart. My spirit was exposed. I cried and cried. I turned completely gray; my eyes, my beard, all gray. I was in intensive care,” Sheen revealed. Sheen had to take a rest for the following six weeks, and his brother Joe Estevez took the role as a replacement. During the shooting, Jason Statham barely died on the sets of The Expendables 3. Luckily for Statham, the actor knew how to swim and amazingly got out of the truck and swum back safely. His co-stars Sylvester Stallone and Terry Crew got a panic during the incident, and both applauded Statham’s ability to deal with the dreadful situation. Ad Harris nearly drowned during the shooting of The Abyss in 1989. It was only when a cameraman intervened and saved Harris’s life. Because of the strenuous shooting, he later had a breakdown and cried.

#9 Viggo Mortensen (The Lord of the Rings) Viggo Mortenson, best known for his character Aragorn in The Lord of The Rings, barely survived many times during his challenging shoot. Mortensen broke two toes when he kicked the helmet, literally drowned due to his too-heavy armor, and swung his sword to block s real knife when a fellow actor accidentally threw it straight at him. While performing a backflip for a stunt, she sadly landed on her neck and was nearly paralyzed. The film crew was immediately halted for eight weeks so that Theron could recover from her injury. Sergio Leone is a brilliant director, but he has been criticized for putting his actors in danger. This case is about Eli Wallach, who almost died three times while filming The Good, The Bad, and The Ugly.

It required Wallach to have his neck around a noose, sitting on a horse, and his hands tied behind his back. Unfortunately, the lop broke, and the horse ran off a mile away. The actor had to balance himself on the horse without his hands.

Wallach drank acid from a bottle placed near his soda by a crew member. Later, Wallach was taken to the hospital. Set in 1846, the movie stars Leonardo DiCaprio, but supporting actor Day-Lewis stole the spotlight. Daniel Day-Lewis would stay in character while hanging out in bars with sharp knives even when he was not on set.

He didn’t wear a warm jacket during the rain because it was not period-accurate, and he got pneumonia. Because of his method, Day-Lewis refused to take medications for it since they were not available in 1846. Luckily, he was finally persuaded to undergo medical treatment once he learned he would die without them.

#13 Margaret Hamilton (The Wizard of Oz) Margaret Hamilton played one dramatic set in Munchkinland, which could have been fatal. The flames required for the scene reacted with the actress’s green-colored, copper-based face paint, causing disastrous results.

Hamilton suffered second and third-degree burns on her face from the flames and had to spend three months recovering from the catastrophic injury before returning to the movie. During Isla Fisher’s drowning scene in Now You See Me, she, unfortunately, got stuck and was in the water tank for about three minutes.

The actress hit the water tank to signal the crew about her situation, but they did not react since that was exactly what her character was supposed to do. Fortunately, Fisher managed to get out of the tank without any hurt. When it comes to Sylvester Stallone, he has also experienced a dreadful situation. To bring the scene of the boxing match between his character Rocky and Dolph Lundgren’s Ivan Drago in Rocky IV to life, he requested the latter to punch him as vital as possible.

Lundgren struck Stallone in the chest, and his heart started to swell. After that, Stallone felt challenged to breathe, and his blood pressure reached 200. The actor was later flown to Saint John’s Regional Medical Center in Santa Monica, where he spent eight days recovering with intensive care.