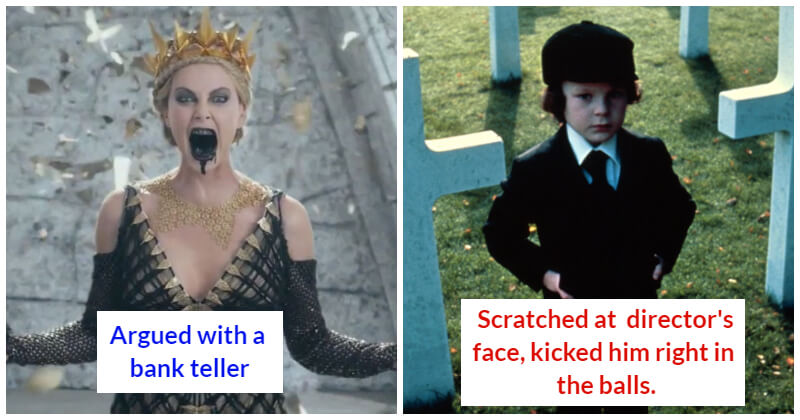 An actor’s decision to accept a role in a film or television series can come from several elements. Young and aspiring actors first tend to accept any offer to promote their careers. As they get more experience, dozens of things come into the picture, including money, a compelling plot, production brand, etc.

So we now know that the majority of actors simply show up for the audition and continue from there. However, there have been some cases where an actor won the role under odd circumstances. The explanations sometimes might be unusual and weird. For example, an actor could get a role just because he was drunk or not good-looking.

Here are 17 craziest reasons that actors were cast for a role. Scroll down and check them out!

#1 Charlize Theron was discovered by talent acquisition during a public argument with a bank teller. She then received a role in Children of the Corn III: Urban Harvest. Charlize Theron was only 19 years old when she was first discovered. She got upset and argued with a clerk in front of everyone after she was refused to pay her check. John Crosby, a talent scout, was attracted to her outburst in the bank and subsequently took over as her manager. Later, she played in Children of the Corn III: Urban Harvest and eventually got an Oscar.

#2 David Boreanaz was seen walking his dog by a friend of the “Buffy the Vampire Slayer” writer. The writer Marti Noxon, a neighbor of Buffy the Vampire Slayer, realized she wanted to cast someone who was irresistibly attractive. Boreanaz was called in for an audition after just happening to be passing by with his dog. Undoubtedly, David had a special attraction to the women in the room.

#3 While working as a carpenter for Francis Ford Coppola, Harrison Ford was noticed by George Lucas and got a role in Star Wars. Harrison Ford and George Lucas had previously collaborated on the American Graffiti movie, which he starred in as the iconic Han Solo. Ford went on to work as a full-time carpenter to support his family after that movie. While this was going on, Lucas was unwilling to recast any performers who had starred in any of his most recent projects. Ford and Lucas luckily met while working on a door at the offices where the casting was taking place.

#4 Harvey Stephens, who played Damien in The Omen, kicked the director in the balls. The Omen was a truly terrifying film, in part because of Harvey Stephens’ portrayal. Richard Donner, the director, changed things up after two days of auditions. Young Stephen was instructed to criticize the director during his audition in the same manner as the character did in the movie. Stephens took this seriously, and kicked him in the balls while scratching at his face.

#5 The late James Michael Tyler was cast in Friends because he was skillful with an espresso machine. The fact that James Michael Tyler was the only extra who understood how to operate an espresso machine seems to have been a joke at the time, as it is now difficult to imagine anyone else performing this role. Despite not having a line until the show’s 33rd episode, it’s safe to say that he quickly gained the audience’s attention.

#6 In preparation for his Game of Thrones audition, Jason Momoa did the Haka. Like Billy Elliot, Momoa conveyed his message through dance. With a very short script and knowing that Khal Drogo virtually ever talked, he chose to perform the Haka. The production team was as frightened as any of us would be, but they were impressed by the intensity of this.

#7 The daughter of director Wes Craven insisted that Johnny Depp is best for Nightmare on Elm Street because she thought he looked “handsome.” Wes Craven found a young Johnny Depp when casting Nightmare on Elm Street. Depp was really nervous during his audition, thus it wasn’t particularly impressive. Craven wasn’t persuaded because he also appeared oily, ill, and pale, despite the fact that his daughter saw Depp’s headshot and had a different opinion. She made a wise decision because Depp has established himself as an accomplished actor with a diverse filmography.

#8 John Roberts got noticed for Bob’s Burgers after impersonating his mother on YouTube. You won’t believe how John Roberts, who plays Linda Belcher, got the role. Roberts created films in the early days of YouTube where he would dress up as his mother and talk with her distinct accent. Loren Bouchard, the creator, noticed this, and the rest is history.

#9 Directors were persuaded that Kit Harington could live in the harsh setting of Game of Thrones after seeing his black eye because of a slap to the face at McDonald’s. Another Game of Thrones star has a special story. Things rapidly became ugly while Kit Harington was dining with his date in a McDonald’s. Harington had a black eye as a result of the struggle that occurred. Ironically, Harington believed that his black eye had helped him land the job when he showed up for his audition.

#10 The reason Ryan Gosling was chosen for The Notebook was that he wasn’t thought to be handsome. Most people might think Ryan Gosling’s good looks helped him get some of the roles he has. Nick Cassavetes, who directed The Notebook, didn’t seem to agree and tell Ryan Gosling, “You’re not gorgeous, you’re not cool, you’re just an average man who looks a little bit nutty.”

#11 In his Game of Thrones audition, Rory McCann lost his temper because he lacked the proper lines. It typically doesn’t go well for most performers to show up unprepared for an audition or interview. However, if you’re The Hound, you might just walk free. The opening lines were accidentally revealed by Rory McCann’s sister, who forced the actor to wait four hours in the heat to learn them. ” I knew I had to go insane when I entered the room, so I let all of this out”, McCann said.

#12 Rosario Dawson was found sitting on her front porch, so she didn’t even have to leave the house to land her role in the movie Kids. Rosario Dawson was just relaxing in front of her house when the scriptwriter saw her and believed she would be perfect for the character. Then, at the age of 15, Dawson went to the audition and started a successful acting career that is still going now.

#13 Samuel L. Jackson ruined the Pulp Fiction audition because he was so angry about being mistaken for Lawrence Fishburne. It’s hard to imagine anyone else as Jules Winnfield, and it appears Samuel L. Jackson didn’t either. Jackson traveled to Los Angeles for a second audition after almost losing his job to another actor, where he was addressed wrongly as Lawrence Fishburne. Jackson was even angrier by this, and he expressed that wrath in his audition.

#14 Sylvester Stallone chose the simple path and created Rocky’s script in just three and a half days. Afterward, he cast himself. Sylvester Stallone decided to create his own story after seeing the championship battle between Muhammad Ali and Chuck Wepner. He had his script accepted, but the studios and producers were hesitant to employ an unknown actor in the position. Then Stallone persisted, eventually taking on the part of Rocky, which made him famous.

#15 Although being drunk at an audition is risky, Tim Roth found it beneficial when casting for Reservoir Dogs. Tim Roth refused to read for the part of Mr. Orange because he was terrible at auditions. Then Roth and Quentin Tarantino continued to binge drink after entering a nearby bar. They proceeded to read the entire screenplay… every part in it maybe ten times because they were blasted by then, according to one witness, while intoxicated. And that’s how he was hired.

#16 Before his Warrior audition, Tom Hardy arrived at the director’s house at midnight. Tom Hardy was supposed to stay at a hotel when he arrived in the US for his Warrior movie audition. Instead, he arrived at the director’s home around midnight and spent the next five days there.

Wayne Knight was lucky enough to completely skip the audition because Steven Spielberg had already seen him in the famous Basic Instinct role. Spielberg wondered what if there is a dinosaur might in the scenario where he is anxiously watching Sharon Stone. Knight then skipped the audition stage entirely and went right into the first day of filming.