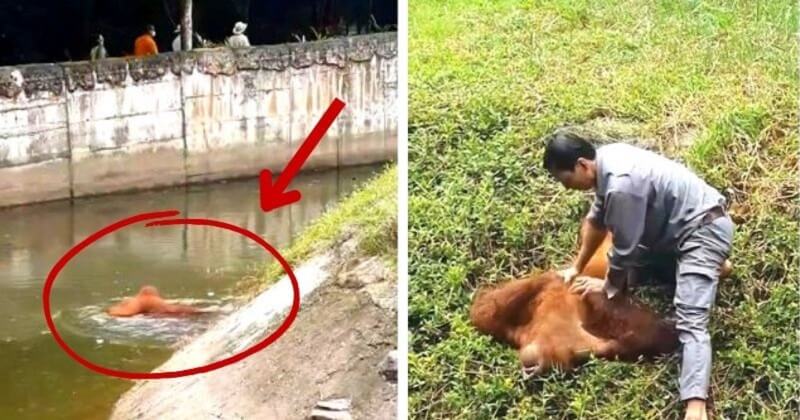 An orangutan suffocated to death as it dove into the water to collect food that a tourist had tossed in. A zookeeper went in to save the animal and performed CPR on it. A few seconds later, a keeper threw a life jacket into the water and dove in many times until he located the orangutan and pulled it back to the surface. The quick-witted keeper followed behind and jumped into the water to begin a dramatic search for the ape. However, the drama was not over as he performed life-saving CPR to revive him. The ape is currently in stable condition after surviving the trauma, according to a spokeswoman for Vinpearl Safari Phu Quoc in Phu Quoc, Vietnam – home to some 3,000 animals. The zoo management added signs advising tourists not to feed the animals unless specifically authorized and are frequently neglected by people, putting animals in danger. Earlier this month, an orangutan seized a man and attempted to take him through a cage, nearly breaking his leg in the process.

While another man tried to save the sufferer, the orangutan held him tightly with both hands and a foot. The clip has sparked a large discussion on Reddit and quickly went viral after being shared.

What do you think about the heroic action of the zookeeper? Please share your thoughts in the comment box below.

Next time, you go to the zoo, do not ruin the zoo regulations, because they are created to ensure your visit more comfortable, safer, and more respectful for adults, and children, as well as, the safety and welfare of  the Zoo inhabitants.