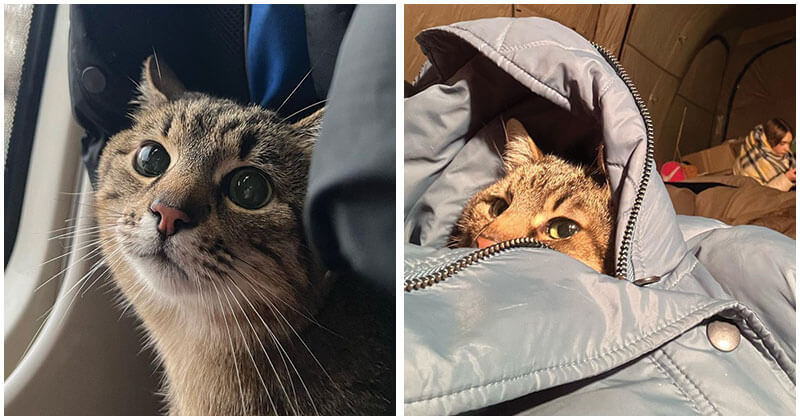 Stepan, a cat, has completely dominated the internet with his adorable and silly photo posing, which his mom shares. Now that he has more than a million followers across Instagram and TikTok, people visit his account with the faith that he will cheer them up. However, because Stepan and his family reside in Ukraine, his life and routine lately had to change.

Everybody was concerned about the safety of Stepan and his family when Russia first invaded Ukraine. On his posts, they left comments with the hope that everyone was doing well, and someone even created a Twitter account for him to provide updates and raise awareness.

When Stepan’s family eventually left Ukraine successfully with Stepan, they were capable of sending an update to let everyone know. Stepan’s family posted on Instagram, “We spent two nights in the basement without electricity for a week.” To charge the phone, they had to travel to the adjoining basement. Volunteers from Kharkiv assisted by driving them to the train station. Then they continued to the Polish border and waited in line at a pedestrian crossing the border. They safely crossed the border after nine hours. Unfortunately, Stepan and his family had to leave since the battle had come to their doorstep. They could never leave Stepan behind, even though finding shelter with a cat must have been challenging. Luckily, the family is currently residing in France and awaiting the day they can travel back to Ukraine. When they reached Poland, they were offered help from the World Influencers and Bloggers Association from Monaco. They are also deeply concerned about their relatives in Ukraine and will do their best to support their country.

Everyone is delighted to know that Stepan and his family are safe, as he has brought so much happiness to many people.

Sal, A Man Who Is Deathly Afraid Of Cats, Is Tied Down By His Friends And Covered With Kitties