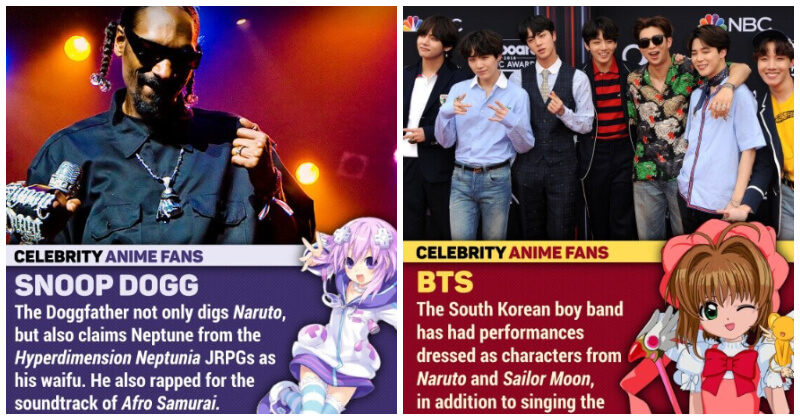 Anime is a specific style of cartoon produced and inspired by Japanese animation. The art style is unique and recognizable. Most characters in anime films are attached with big eyes, wild hair, and even cute facial expressions. This exaggerated design helps the characters more attractive. Therefore, it’s not a surprise that anime fandom has grown worldwide over the past 30 years and this includes a wave of celebrity fans.

Some are extremely into anime characters, some are passionate about the smallest details of their favorite movies. These stars have openly shared their love for anime, from getting tattoos relevant to movies to cosplaying as characters. Famous people seemingly miss none.

If you’re curious about celebrities who are huge anime fans, scroll down to see them. Keanu Reeves is a huge fan of Cowboy Bebop. He wanted to become Spike Spiegel and be a part of the galactic fights. The actor wished to make a movie on the series and star as the lead. However, the film couldn’t be possible because of the huge budget. Taika Waititi revealed himself to be a fan of Eiichiro Oda’s One Piece. The filmmaker can be seen wearing a sweater with Luffy’s Wanted Poster emblazoned across the front. The veteran actor has been very vocal about being an Okatu at heart. He claims to be a big nerd of comic books and anime. In fact, the actor has voiced the main lead in Afro Samurai. Robin Williams is known as one of Hollywood’s brightest comedic talents, but a big fan of anime. During a Reddit AMA, Williams was asked if he enjoyed any other anime series aside from Evangelion. The actor listed plenty, but he said titles like Ghost in the Shell, Akira, and Cowboy Bebop were his top picks. The RZA isn’t just an anime fan, he is an anime composer. He scored the hip-hop soundtrack of the Afro Samurai anime series and movie sequel, Afro Samurai: Resurrection. He also revealed that Dragon Ball Z is the perfect allegory for growing up Black in America. Leonardo DiCaprio is a huge fan of Studio Ghibli films such as Ponyo ad Howl’s Moving Castle. He also tried to get a live-action adaption of Akira done for several years. Jamie Lee Curtis may be one of Hollywood’s most unexpected anime lovers to date. She made her otaku origins public when she attended the red carpet for “One Piece Film: Gold” in Hollywood. The actress appeared at the event with her son, and she tweeted she loved the dub voice actress for Tony Tony Chopper. Michael B. Jordan is very vocal about his love for anime. He even launched a collection inspired by his favorite anime – Naruto: Shippuden – in collaboration with Coach. For him, anime is something that was a big piece of his childhood and adult life. Megan Fox is a huge fan of reading manga and graphic novels, and anime. In an interview on Seventeen, the actress admitted that she always wanted to be a part of movie adaptions of a few anime series. She suggested Gundam Wing and Sailor Moon for remakes. What makes this list extremely special is the addition of the billionaire Elon Musk. The Tesla and SpaceX CEO is a huge fan of anime. His favorites include Spirited Away, Princess Mononoke, and Your Name. Avril Lavigne has moved away from skater boys and embraced the world of anime pirates. The pop singer wrote two songs for the movie One Piece Film Z when it debuted in North America. The famous anime series Death Note never fails to impress. Its perfectly intriguing story has made a lot of fans including Zac Efron. In 2009, he was in talks to star in the live-adaption of the anime. However, the project didn’t make it to the floors. The K-pop band BTS have shown their love for anime many times. Jimin is particularly known to be a big fan of One Piece and was even gifted a Roronoa Zoro action figure on his birthday. They also sang the opening theme to Cardcaptor Sakura. Ariana Grande has revealed her love for anime through tattoos. She got a tattoo on the inside of her right arm of the character Chihiro Ogino from the 2001 anime film Spirited Away. The pop singer also showed her love for Pokémon with a tattoo of Eevee on her upper left arm.