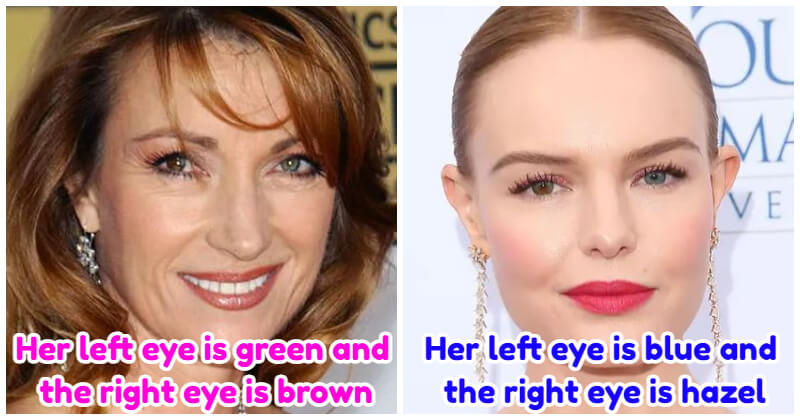 It is said that the eyes are the windows to the soul. Beautiful eye color is striking on anyone, but what about two different eye colors? The condition where someone has more than one eye color is called heterochromia. This may seem like a feature that only appears in fiction, but heterochromia does occur in real life.

Some A-listers have two contrasting eye hues. Whether it is blue and brown or hazel and green, their multicolored eyes have made them all more unique and attractive. Although many people say that having different-colored eyes is a problem, these celebs prove that there is no such thing as a beauty flaw.

If you’re curious about celebrities who own two-colored eyes, scroll down to see them. Kate Bosworth is famous for her multicolored eyes. In 2006, she took on a role in “Superman Returns”, and the movie director told her not to be concerned with showing off a homochromatic. It became her first movie appearance with the real color of her irises. The pretty actress has one blue and another hazel eye. Many might not know that Mila Kunis’s heterochromia was a result of an eye infection called chronic iritis. This made her blind in one eye for many years and required surgery to replace the damaged lens. Now, her left eye is darker than her right. Henry Cavill was born with this eye disorder. One iris is blue and another one has a patch of brown on the top. The actor never hides his eyes and loves this “flaw”. The “She’s Out Of My League” actress has one hazel and one blue eye. Her heterochromia condition became public when she didn’t deny that she had the beauty uniqueness on a live show. Benedict Cumberbatch’s intriguing eyes are a combination of blue and green. They may shift their color depending on the light.

Simon Pegg revealed on The Sunday Night Project show that his eyes were blue-gray but he observed a flash of brown in his right eye. Jane Seymour is well-known for her unique heterochromatic eyes. The “Dr.Quinn, Medicine Woman” star’s left eye is green while the right one is brown. It is easy to realize Jane with heterochromia iridis from a distance.

Dan Aykroyd has one brow and one green eye. However, many might not notice them because he often hides them behind a pair of sunglasses. Christopher Walken has a beautiful pair of eyes. His eyes are blue with an inner ring, but people also notice one hazel and one green eye.