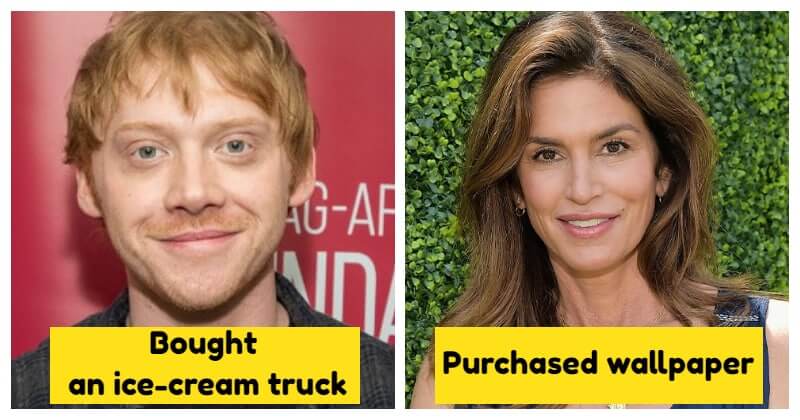 The first paycheck is an exciting and motivating thing – it brings you a sense of accomplishment and fuels your drive to succeed. So, what did you spend your first paycheck on? When laying our hands on the first paycheck, we tend to host a party to celebrate or help our parents with groceries. Celebrities are no exception.

Not all celebs come from rich families, and many of them have to work from the ground up to achieve the fame that they enjoy today. Although they lead luxurious lives these days, they reminisce about the moment they get their first paycheck. Instead of saving the cash, some treat themselves to a trip to a top-rated beach, or went straight to a mall and dropped a sum of money there. However, some celebrities have weird ideas.

If you’re curious about how famous people spent their first paycheck, keep scrolling down to see. Upon landing the role of Ron Weasely in the “Harry Potter” films, the first thing Grint spent on his big paycheck was on an ice-cream truck. Before getting into acting, Rupert wanted to be an ice cream man. Rupert actually uses the truck to sell ice cream, so he’s finally able to live out his ice cream man dreams. When getting her big paycheck, Nicole Kidman didn’t spend the money on herself and instead gave back to those who helped her get to that point in her career. She decided to splurge on a washing machine for her parents. She also bought some boots for herself afterward. When Kelly Rowland cashed her first salary, the singer had a unique idea. She dashed to the grocery store and purchased all of the food that her mom said was too expensive. For her, that feeling is impossible to describe in words. Johnny Depp had a rough childhood growing up, as his family had to move around a lot and his mom had to work multiple jobs to put food on the table. Therefore, he used his first big paycheck to buy his mom a horse near Lexington for his mom, one big thank you gift. Rami Malek, the star of Mr. Robot, knew exactly what he wanted when he got his first paycheck. The actor was a huge lover of coffee, so he bought a personal espresso machine. Rami admitted to having a bit of coffee addiction and he figured that buying a coffee machine would help. Jennifer Lopez used to drive an ancient Honda hatchback to every audition, but with her first salary, she upgraded to a Mercedes. She recalled in the showroom when signing the lease. It was a memorable moment. Cindy Crawford is one of the most famous supermodels in the world. When Cindy earned her first big paycheck, she didn’t spend it on purchasing clothes or shoes. Instead, she went for something different completely – wallpaper. The supermodel enjoys keeping her home in top shape. When Matt LeBlanc starred in “Friends”, the actor only had 11 dollars to his name. When the show first aired, the cast was making 22,500 dollars per episode. By the series’ end, he earned 1 million dollars per episode. Upon receiving his first paycheck, he treated himself to a hot dinner which he didn’t afford as a struggling actor.