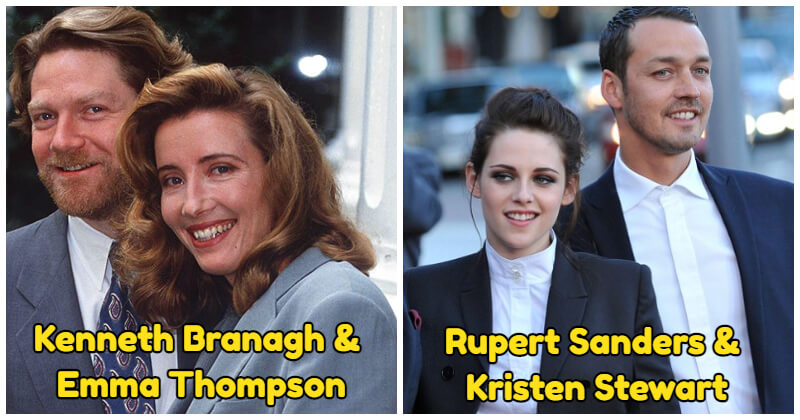 In Hollywood, the hookups between actors that develop on a movie set instantly cause a stir in public opinion. But not just actors and actresses find themselves in relationships. Sometimes, it’s the director who fell in love with the leading girl. It’s not uncommon because, after the shoot, actors/actresses spend more time with directors to improve their performance. And long working hours and endless cups of coffee can lead an actor and director to develop feelings for each other.

Here, we’ve compiled a list of directors who fell in love with their lead actresses and married them after the film! A few of these hookups developed from scandalous love affairs that infuriated the public, other relationships are so beautiful that fans regret them when they break up!

Scroll down to see! What do you think about these relationships? Let us know in the comment below. Before meeting Diane Keaton, Woody Allen, one of the greatest directors of all time, was married to a well-known actress of the day. Allen met and loved Diane Keaton on the set of “Play It Again, Sam” in 1972, where he was director. Although they broke up after a year, Diane continued to appear in his films, including “Sleeper” and “Love and Death”. After that, Allen started dating and married Mia Farrow but their marriage just lasted for more than 12 years from 1980 to 1992. Orson Welles and Rita Hayworth were working on his film “The Lady From Shanghai” before he divorced the star of the film – Rita Hayworth. On September 7, 1943, Welles wed Rita Hayworth. They had a daughter together before being divorced on November 10, 1947. Welles referred to Hayworth as “one of the dearest and sweetest women that ever lived” during his final interview, which was taped for The Merv Griffin Show the night before he passed away. “We were a long time together—I was lucky enough to have been with her longer than any of the other men in her life,” he said. Charlie Chaplin was regarded as the king of the film industry during the peak of black and white film. Chaplin is a producer and a director in addition to being a comedian and actor. In movies like “Modern Times” and “The Great Dictator”, Charlie Chaplin and his future wife Paulette Goddard were coworkers. But aside from referring to Goddard as “my wife” at “The Great Dictator” premiere, neither Goddard nor Chaplin made any more public remarks about their marital status. However, she was the most influential woman for Chaplin, and the roles Charlie created for her in her two Chaplin films were influenced by her very personality. Besson is best known for his cult classic sci-fi film – “The Fifth Element”. Thanks to the film, he met and fell in love with the movie’s chosen lead actress – Milla Jovovich, who was 16 years younger than him. Before the wedding on 14 December 1997 with Milla, Besson has been married four times and had a daughter, Juliette, born in 1987. When the couple got married, Besson was 38 at the time and Milla Jovovich was 21. But the marriage didn’t last for long. Two years later, they divorced. The famed director-actress relationship was really an infamous affair. While filming “Snow White & The Huntsman,” Rupert Sanders got to know Kristen Stewart. At the time, Kristen was dating Robert Pattinson, and Rupert Sanders was married to Liberty Ross. Because of this, their supporters, loved ones, and friends did not approve of their relationship. However, this relationship did not survive very long. They had to publicly apologize. What a mess. Actor and filmmaker Kenneth Branagh is well-known for films including “Hamlet” and “Murder on the Orient Express.” He has also helmed popular films including “Cinderella” and “Thor.” Emma Thompson is a renowned actress who has been in movies like “Saving Mr. Banks,” “Late Night,” and “Cruella”. They seemed to be a match made in cinematic heaven, but they quickly came tumbling down from cloud nine. The duo shocked fans when announcing divorce in 1995, after just six years of marriage. On the sets of the 2001’s disastrous “Planet of the Apes” reboot, the legendary director Tim Burton first met his love – actress Helena Bonham Carter. While the movie was a failure, their love secretly blossomed. After that, Burton aided Carter’s career by making her a star in many of his own passion projects such as “Charlie and the Chocolate Factory”, and “Sweeney Todd: The Demon Barber of Fleet Street”, “Alice in Wonderland” and “Dark Shadows”. But after 13 years together, they have split and the couple has 2 kids.