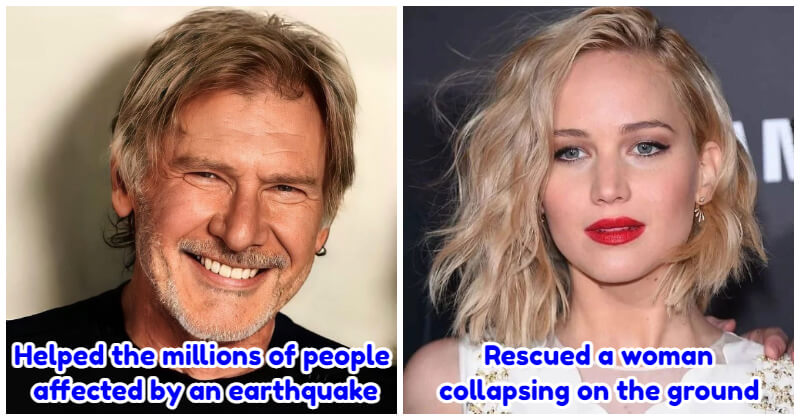 Hollywood is known for its excess: the glitz and glamour. Celebrities are sometimes described as pampered and vacuous malcontents. Many tabloids and paparazzi expose negative stories about celebs alienating their co-workers or even their fans through rude behaviors. Additionally, several famous people eat up any type of attention they can get and even do nice things for people just to get noticed. That sometimes makes us look down on them and shake our heads.

Luckily, many famous people who owe a huge fortune, don’t care about being scrutinized for helping people, they engage in acts of kindness. For example, Jamie Fox saved a man from his burning vehicle and Christian Bale helped a boy battling cancer fulfill his dreams that meeting Batman.

Keep scrolling down to know more. On the evening of Dec 2014, Angelina Jolie comforted a female fan, Techna, who had a panic attack amongst a throng of people outside the set of The Daily Show with Jon Stewart. The actress kneeled on the floor to get eye-level with her fan, then consoled until she was sure Techna was alright. Shaquille O’Neal went to an Atlanta-area jewelry store looking to buy some hoop earrings and ended up providing a good deed for a stranger. He looked at a man purchasing an engagement ring and then gave the cashier his credit card to pay for the ring. The former basketball player shook hands with the man and congratulated him. An Oprah Winfrey fan, Brandi, fell in love with her dress after seeing the actress wearing it on the cover of Essence magazine. Brandi tweeted at Oprah and asked her for the dress. Winfrey didn’t hesitantly donate it to her. Students at the University of Texas were surprised when seeing Matthew McConaughey after school. The Oscar-winning actor volunteered to take the wheel as part of the student government’s Sure Walk program to make sure that students go home safely. Harry and Meghan spent the holidays in Canada with baby Archie and Meghan’s mom Doria Ragland. While hiking on New Year’s Day, they spotted a young couple struggling to take a photo with a selfie stick. The royal couple helped them take pictures. Harrison Ford took part in the works of helping the millions of people affected by an earthquake in Haiti. He made many flights over two days and transported 20 volunteers including surgeons, an anesthetist, and nurses, as well as medical supplies. Especially, he rescued a woman and a boy on separate occasions. Taylor Swift invited 89 of her fans, picked at random, to attend a “secret session” night at her house. The singer hung out with her fan for 6 hours and treated them with homemade cookies, let them pet her cats, and shared her album with them. The young boy Jayden, who was fighting cancer, wanted to meet the “real Batman”. After hearing about the story, Christian Bale flew Jayden and his family to LA and treated them to lunch at Disney’s Club 33. Jennifer Lawrence became a real-life heroine when she reportedly came to the rescue of a young woman who had collapsed outside of her apartment. The actress was at the woman’s side until the paramedics arrived. The British journalist, Laurie Penny walked into the street and forgot that a car was coming. Fortunately, Ryan Gosling pulled her back before she was run over by a yellow cab.

How Disney Princesses Inspired Us With Their Acts Of Kindness