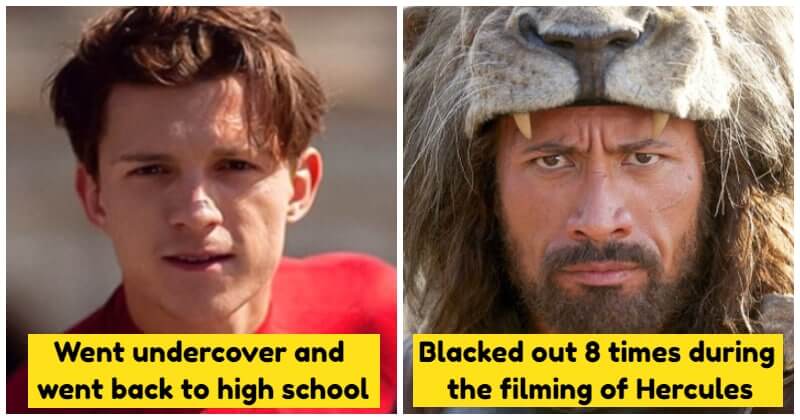 Method acting is knowns as a technique or type of acting that actors employ to emotionally empathize with the character they are portraying. When practicing this method, the actors immerse themselves in the character and frequently stay in the role for a long period. Many movie stars such as Joaquin Phoenix, Heath Ledger, and Jeremy Strong use this method to fulfill their roles and they receive critical acclaim.

However, diving deep into the concept of method acting may affect some actors’ lives off-screen. While some lost their voice in a short time, some even underwent mental health treatments. We’ve rounded up 10 times actors went all out to get deep in character and made us say “that’s something”.

#1 Colin Firth had a stammer even after the shooting of The King’s Speech. Colin Firth successfully portrayed King George VI in “The King’s Speech”. However, after the movie ended, he had trouble with his voice. His vocal cord was injured so the star had to have surgery on it. Spider-Man: Far From Home star Tom Holland opened up about preparing for his big role, which included going undercover at a real-life high school. He went to New York City high school with a fake name and a fake accent. For him, heading to school was an interesting and strange experience.

#3 Jodie Foster trained with the FBI. For preparing her role as Clarice Starling, a young FBI cadet in “The Silence of the Lambs”, Jodie Foster attended a special training course. She received instructions from an FBI agent and had a tough time. Source: © everett225/Depositphotos.com, © Down and Out in Beverly Hills/Touchstone Films and co-producer

Nick Nolte spent five weeks living as a homeless man in Los Angeles to prepare for his role in “Down and Out in Beverly Hills”. In the movie, the actor ate real dog food twice, once out of a bowl and once straight from the can. The character earned him the praise of critics.

#5 Meryl Streep refused to associate in real life with her on-screen employees. For her portrayal of the cold-hearted Editor-in-Chief in “The Devil Wears Prada”, Meryl Streep refused to associate with her co-stars. Although her role got her an Academy Award nomination, she felt so lonely. For this reason, she ruined her desire to try method acting.

#6 Dwayne Johnson blacked out 8 times during the filming of Hercules. Dwayne Johnson shared an Instagram video and photo from the set of Hercules, where he worked hard to make the mythological warrior more realistic. he asked the prop department to lock him in with real steel chains so that the performance would be real. He passed out from the adrenaline rush during all the 8 times the scene was filmed. Playing a vascular surgeon is not easy. Harrison Ford portrayed Dr. Richard Kimble in the 1993 thriller movie “The Fugitive”. Believe it or not, the actor assisted in real-life open heart surgery to get into character for the role despite the fact that the operation scene was very short.

#8 Lady Gaga spoke in an Italian accent for 9 months. #9 Heath Ledger locked himself away in a hotel room for a month. For preparing the role of Joker in “The Dark Knight”, Heath Ledger locked himself up in a hotel room for a month. He wrote a daily diary as the Caped Crusader’s arch-nemesis. Alan Rickman, playing Snape in the “Harry Potter” franchise, helped the costume team with the design of his clothes. He imagined Snape buttoning up his coat a lot and wanted the outfits to have tight sleeves. Alan Rickman hoped for the costume to be very transforming – he wanted to feel like a different person when he put it on.

What Wrong With Kesha And Dr Luke? Everything You Need To Know About #FreeKesha

All Information About Avatar 2: Release Date, Cast, Trailer And Leaks About ‘The Way Of Water’

15 Before-Now Photos Of The “Sexiest Men Alive” So Far