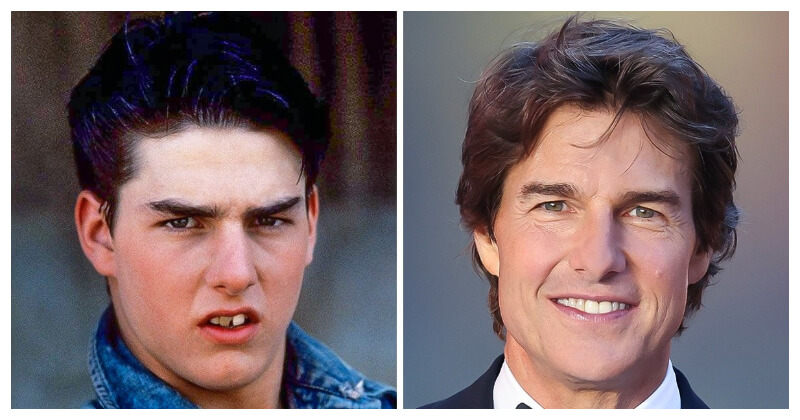 Celebrities often change their look to star in a new movie, an advertisement campaign, or a music video. While some famous people want a total makeover, using plastic surgery and fillers, others simply opt for changing their hair color or growing a beard. No matter what they choose, fans respect their choice.

Some celebrities are known for having a very specific look or style that defines them. For example, Jennifer Aniston is famous for her curly and wavy hair, and Adele has her cat-eye liner and appears in long dresses. Although these alternatives are minor, they make people say “wow” or even felt jealous of celebrities.

Below are 7 famous people who undergo minor makeovers to revolutionize their appearance. Early in his career, Tom Cruise made the right decision by undergoing cosmetic dentistry procedures. His teeth were first brought to the public’s attention when he played Steve Randle in “The Outsiders”. He volunteered to rip the cap from his front teeth to fulfill his role. At the premiere of his film “Minority Report”, he wore braces for the first time. Demi Lovato gave a daring look to her personality as she rocked a very stylish hairstyle. The singer first decided to change up their hair back in November 2021 and revealed that a shorter cut is suitable for her personality. Adele opened up about her weight loss to Oprah Winfrey in an interview. She shared details about her workout routine and explained how exercise has made her stronger, both physically and mentally. The singer lost 100 pounds in two years by lifting weight and doing circuit training. Ariana Grande moved away from the teenage girl image and has become a fashionista. She rocks her signature look of swingy high ponytails and sharp winged eyeliner. Now, she is nearly unrecognizable, she looks more glamorous. Miley Cyrus has changed her appearance without plastic surgery. She cut and dyed her hair to look exactly like her old alter-ego, Hannah Montana. In addition, she fixed her teeth to make her smile more attractive. After gaining weight to play Andy Dwyer on “Parks and Recreation”, Pratt lost 60 pounds in six months to become action star material in 2013. The actor cut out beer, upped his calorie intake to 4,000 calories a day, and drank a bunch of water. Lady Gaga transformed her look when starring in “A Star Is Born”. The actress showed off her makeup, and bleached hair. Furthermore, she replaced her quirky outfits with plain white tees and tailored pants.