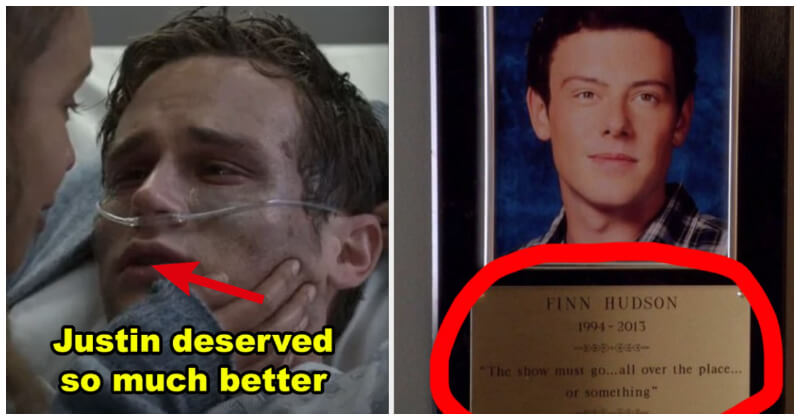 People love some TV shows for different reasons: some amazing characters and interesting plots. A lot of people have watched some series from the beginning and witnessed some characters’ deaths that honestly changed the whole movie.

There are some heartbreaking deaths in movies that made people feel shocked. They found it hard to forget those scenes. Whether they happen in a children’s movie, a big-budget superhero film, or a doomed romance, they will tug on your heartstrings and have you looking for your tissues. Indeed, these deaths can turn a comedy into a drama. And they actually are turning points in any kind of movie.

Below are the heartbreaking tragics in movies and TV shows. Let’s scroll down and leave your opinion in the comment section.

#1 In This Is Us, when Jack randomly had a heart attack in the hospital, Rebecca’s life flashed before her eyes.

Although we knew his death, we didn’t know how it happened. He is a great dad and husband, and his relationship with Rebecca was so beautiful.

#2 The moment Buffy found her mom’s lifeless body on the couch in Buffy the Vampire Slayer wrenched the audience’s hearts. Anya’s reaction to her mom’s death was an obsession. She didn’t have a chance to save her mom.

#3 Wes’s corpse was revealed near the burning building, Annalise shouted in fear in How to Get Away with Murder.

Wes is the favorite character of many people. When he was killed, we all know that the heart of the show is gone.

#4 Justin Foley had the best character arc ever, but they randomly gave him AIDS and killed him off in 13 Reasons Why. The character was developed so well on the entire show, and he was just forced to die. No one could understand the writer.

Lexie Grey was truly the greatest character of Grey. She didn’t deserve to die so tragically. Many people got a heart-breaking moment from her death.

#6 In How I Met Your Mother when Marshall got his dad’s death news from Lily in the hospital. It’s a comedy show, but people were heart-wrenching when Marshall’s dad died on How I Met Your Mother. Most of the fans of the series cried for days.

#7 In Game of Thrones, until Hodor died in the hands of White Walkers, she was still holding the door so Bran and Meera could escape. Hodor’s death wrenched people’s hearts and is considered one of the most tragic deaths before Season 6.

#8 John Ritter’s death changed everything in the show 8 Simple Rules. John Ritter’s death was just a punch in the gut.

#9 In Jane the Virgin, Michael collapsed and stopped breathing because of the injuries from his gunshot wound.

He came back in the last episode of Season 4. However,  his initial death was truly shocking. Jane was so happy and deserved more than that.

#10 In Glee, they wrote Cory Monteith’s real-life death into the show, making the cast’s reactions especially powerful and vulnerable. Cory Monteith’s death shifted the movie into a new chapter.

#11 In The O.C., Ryan tried to save Marissa after a car crash, but she died in his arms. People were so upset when watching their favorite character face death. A lot of people can’t stop crying.

#12 In Orange Is the New Black, Poussey was killed by the guard while trying to help Crazy Eyes. Poussey Washington’s death was the most hurtful death on television. The audience’s day may be messed up when they were watching this.

#13 In Dexter, Dexter came home and found Harrison in a pool of blood, but it turned out to be Rita’s.

It was the biggest plot twist ever. She was the last person the fan of the show have guessed would die.

#14 In The Walking Dead, everyone else had to watch Glenn being beaten to death.

Some people just stopped watching after his death. Glenn deserved as much happiness as one can get during a zombie apocalypse.

#15 In Stranger Things, Bob decided to sacrifice himself to save everyone else. Probably, not many people can get over Bob’s untimely death.