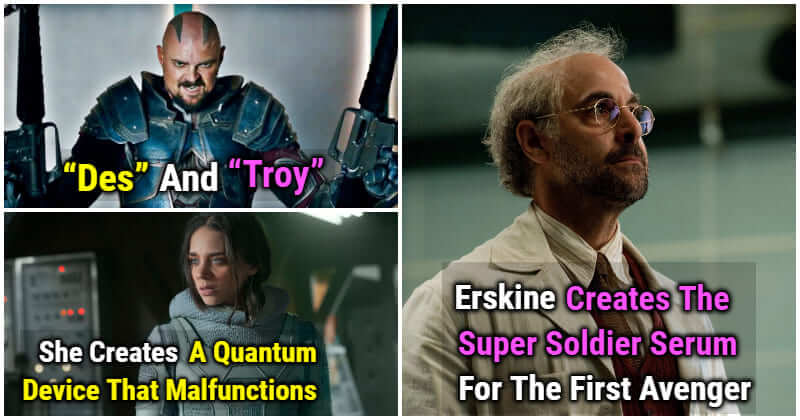 Major heroes like Captain America and Iron Man are well-loved, but many renowned MCU characters only appear in one film. One-off characters offer each MCU production a unique flavor and make each picture seem a little different. With many films and television series being added to the Marvel Cinematic Universe every year, having some distinct characters that don’t appear regularly is crucial.

Whether it’s Skurge’s collection of Earth oddities and eventual turn against Hela in Thor: Ragnarok or Abraham Erskine’s confidence in Steve Rogers in Captain America: The First Avenger, the following one-off MCU characters have made a lasting impression on the series throughout the years. Some may even make a cameo in the MCU at some point in the future! Skurge arrived in the Thor universe at the perfect time. If he had featured in either of the first two Thor films, he would have been forgotten as another forgettable comic character adaption, similar to the Warriors Three or Kurse from Thor: The Dark World.

Instead, this Asgardian shone brightly in Thor: Ragnarok, the film that resurrected both the God of Thunder and his cinematic franchise.

Karl Urban also had a chance to shine as Skurge. How many movies let you brag about having Shake Weights, offer you true character development, and let you die in a blaze of glory while battling zombies with assault rifles? Oh, and his assault guns were dubbed “Des” and “Troy” because, well, why not? Captain America: The First Avenger’s first half is a near-flawless origin narrative for Steve Rogers. When he becomes Captain America, and all the combat begins, things go a little off the rails, but the first half of the film serves as one of the greatest character introductions the MCU has done so far.

While much of this is down to Chris Evans’ portrayal of Steve Rogers and the CGI magic used to create a genuinely small version of him, Stanley Tucci’s Abraham Erskine also contributes significantly. If Rogers is Captain America: The First Avenger’s heart, Erskine is the film’s soul. After all, without the German expatriate, Captain America would not exist. Erskine not only created the Super Soldier Serum that gave Rogers his immaculate physiology, but he also ensured Rogers’ acceptance into the Army.

The moment in which Rogers and Erskine have a quiet talk the night before Rogers’ serum surgery is one of the greatest in the whole first phase of the MCU.

For two reasons, Pietro Maximoff has a longer-lasting legacy than other one-off MCU characters. To begin with, his sister, Wanda Maximoff (Elizabeth Olsen), has become a more important presence in many MCU initiatives in recent years, and the tragedy of losing her brother has been a big source of anguish for her.

Second, about the same time, Pietro had his lone MCU debut in Avengers: Age of Ultron, another version of the same comic book hero became a fan favorite in Fox’s X-Men film franchise. Pietro perished in the MCU’s Age of Ultron conclusion while saving Hawkeye and a young Sokovian kid, and there don’t appear to be any preparations in place to bring him back via the Multiverse, as Gamora did in Avengers: Endgame.

Although, for fans of both shows, putting Evan Peters, who played a role in Fox’s adaptation, into the MCU for WandaVision was a pleasant “wink wink, nudge nudge.” Ava Starr, Ant-Man, and the Wasp’s not-so-villainous nemesis, have a rather unique power set. The fact that the powers were about to murder her if Janet van Dyne hadn’t intervened was not fantastic. And, yes, the accident that granted her the abilities resulted in the death of her parents, which is not ideal. But come on! She can become intangible and invisible! People, those are some lethal abilities.

Ava went off into the sunset with Bill Foster at the end of Ant-Man and the Wasp. Will Ant-Man and the Wasp: Quantumania see the couple again? Will Ava lend a hand to Scott Lang and Hope van Dyne in their struggle against Kang the Conqueror? Will she have anything to do with whatever Bill Murray is up to in the film? Who can say!?

Ayesha is a high-society character, as seen by her golden complexion. Her actual title is “Golden High Priestess of the Sovereign,” and she ran afoul of Star-Lord and the other Guardians in the first issue of Guardians of the Galaxy Vol. 2. She spent the rest of the film attempting, but failing, to avenge the ragtag collection of “a-holes.”

Ayesha’s most enduring gift to the MCU will be Adam Warlock, whom she created. Will Poulter reprised his role as Warlock in Guardians of the Galaxy Vol. 3, a superbeing knew for his symbiotic bond with the Soul Stone. Ayesha’s effect on the MCU will undoubtedly expand as Warlock’s presence in the franchise grows. The character of Justin Hammer, played by Sam Rockwell, would be missed. Not because he’s a terrific villain, but because Rockwell is so wonderful in the part, this sadsack corporate monster has become a fan favorite through the years.

Marvel needs to bring this character back at some time. Simply to be able to dance once more. Also, his presence in the Marvel one-shot All Hail the King doesn’t really count… Look no farther than Alfre Woodard’s Miriam Sharpe to discover how one sequence can completely dominate a film. Tony Stark and Steve Rogers’ fundamental battle had to begin somewhere, and it did so in the shape of Sharpe’s rhetorical attack on the Avengers. Sharpe is waiting for Stark after he donates a large sum of money to MIT and receives a standing ovation.

She wants nothing more than to speak with you. Granted, her narrative in Avengers: Age of Ultron about her son’s death during the Battle of Sokovia disturbs Stark to his core. Sharpe isn’t trying to assassinate Stark or anything… she’s simply a mother suffering from the death of a kid. She holds the Avengers responsible

. The truth of the situation enrages Tony, and we’ve got a movie on our hands! Irani Rael, Nova Prime and commander of the Nova Corps in Guardians of the Galaxy, was played by Glenn Close and didn’t get much screen time during her one appearance in the Marvel Cinematic Universe.

In the first Guardians film, the iconic performer was given nothing to do besides show up, be given a haircut that made her think she was playing Cruella de Vil again, and be an awesome badass in a few sequences.

While it’s conceivable she’s still alive in the MCU; you have to assume she didn’t survive Thanos’ raid on Xandar in quest of the Power Stone, which took place offscreen. While that attack occurred before Avengers: Infinity War and was never made into a movie, it’s apparent that Thanos and the Black Order slaughtered the Nova Corps to obtain the Power Stone from Xandar.

To be honest, a Marvel one-shot in which the Black Order steals the Power Stone from the Nova Corps would be a fantastic effort. It would cement the destiny of several Guardians of the Galaxy characters and demonstrate that the Black Order is more than just cannon fodder for the franchise. Betty Ross first appeared in the pages of Marvel comic books in 1962. Ross predates legendary characters like Spider-Man and the X-Men has featured in hundreds of issues of comic books, and are the Hulk’s most important supporting character. You might not even know she exists in the Marvel Cinematic Universe if you haven’t seen 2008’s The Incredible Hulk.

Ross, played by Liv Tyler, appears to be suffering from two setbacks: Edward Norton’s departure from the MCU and Universal Studios’ apparent ownership of the film rights to any solo Hulk film.

Betty Ross hasn’t been seen onscreen alongside Mark Ruffalo’s Bruce Banner in the MCU since 2012, even though The Incredible Hulk is a widely forgotten film. Betty hasn’t featured in any other MCU projects since 2008, unlike her father, Thunderbolt Ross, and Abomination from The Incredible Hulk. Will she make an appearance in She-Hulk? What a case of being in over your head. Maya Hansen teamed up with Aldrich Killian around the turn of the millennium, as shown in the opening scene of Iron Man 3, to transform the world. Her business partner had become a little bit of a psychopath by the time she turned on Killian when he was threatening Tony Stark.

Was anyone astonished when Killian shot Hansen at point-blank range in Iron Man 3 and killed her without hesitation? Marvel Studios was fortunate to land Rebecca Hall as Hansen in the first place, and murdering her off so abruptly has proven to be a waste of time. Minn-Erva is unlikely to make another appearance in the Marvel Cinematic Universe anytime soon. Not only did she appear to die in Captain Marvel, but the actress who played her in Eternals went on to play Sersi.

Even though Eternals was a disappointment (at least in terms of Marvel Studios’ overall popularity), Sersi is expected to have a role in the MCU’s future.

Minn-Erva was the Yon-Rogg sidekick with the greatest flair and personality, which is a pity. Carol Danvers’ enmity with her may have been used in future MCU ventures. Minn-Erva will be remembered as the blue alien who believed she was superior to Captain Marvel even though she wasn’t.

Some characters are simply unlucky. Liz from Spider-Man: Homecoming has to be one of the most unlucky characters in the Marvel Cinematic Universe. Not only did her father, Adrian Toomes, turn out to be a heinous supervillain who threw her entire life into disarray, but her homecoming dance partner, Peter Parker, brought him to justice.

After her father was jailed, Liz and her mother moved to Oregon, and Liz dropped the name “Toomes” in favor of her mother’s maiden name, “Allan.” Of course, Liz was unaware that Peter was Spider-Man until the conclusion of Spider-Man: Far From Home since his identity was kept a secret until the film’s end.

On the other hand, Liz was seen on the cover of a People magazine in Spider-Man: No Way Home, labeling Parker a “fraud.” Liz was the first MCU example of Peter’s personal life constantly taking second place to his heroic one.