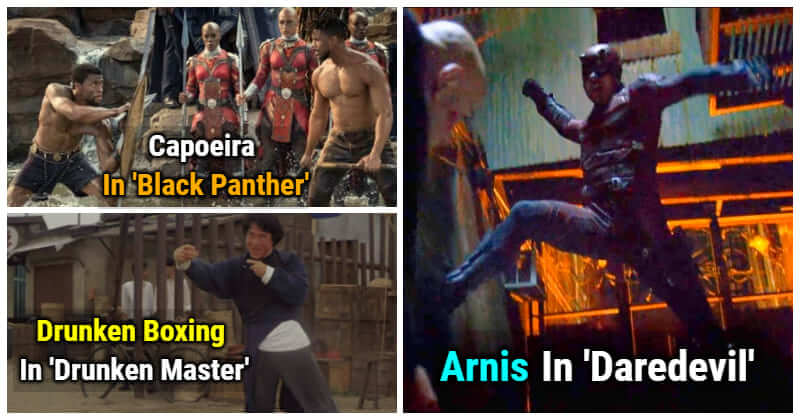 Martial arts have been portrayed in films since the 1920s. Modern martial arts films are still hugely popular, as seen by the Ong-Bak series and Mortal Kombat 2021.

However, martial arts appear in various cinema genres other than typical martial arts films. Martial artists are frequently hired as trainers and fight choreographers in American films. As a result, martial arts are featured in a wide range of American films, including superhero blockbusters such as Black Panther and The Dark Knight Rises, action thrillers such as The Matrix and John Wick, and children’s films such as The Karate Kid and Kung Fu Panda. Below are the 14 fighting styles you may not realize in the movies.

Hundreds of martial arts systems exist in China, yet “kung fu” is associated with martial arts for many people worldwide. Wing Chun is a type of kung fu that originated in southern China, although it concentrates on close-quarters combat to offer smaller fighters an advantage. Punches and low kicks are emphasized, which may be strung together to create numerous powerful attacks. It’s also claimed to be the only martial art with a female origin story.

3. Capoeira In ‘Black Panther, The Assailant, Only the Strong’

Capoeira is more than a martial art; it also utilizes dance to produce a rhythmic, hybrid fighting technique that combines dance routines with combat strikes.

4. MMA In ‘Warrior, Never Back Down, Here Comes the Boom’ MMA is not a martial art in and of itself but rather a sport incorporating almost all of them. It’s the only combat sport in which viewers may watch combatants with radically different styles go head to head on a regular basis. Krav maga was created to let the user defend themselves against many assailants approaching from all sides. In addition, krav maga lacks a spiritual component unlike many other martial arts.

Brazilian jiu-jitsu, on the other hand, concentrates mostly on ground grappling or wrestling in a prone posture. Muay Thai focuses on precise and forceful close-quarters kicks and knee, punch, and elbow blow. Muay Thai is intimately related to Buddhism and promotes a spiritual lifestyle based on the characteristics of “respect, humility, self-control, and compassion.”

8. Aikido In ‘The Man in the High Castle, Above the Law, Hard to Kill’ Aikido is comparable to judo and jiu-jitsu, but the primary distinction is that aikido is primarily used for self-defense (although some variations of aikido do include offense). As a result, traditional aikido featured no offensive movements and was not a competitive sport.

Aikido, like judo, teaches practitioners how to gain perfect mental and physical control. “To harm an opponent is to injure oneself,” Ueshiba said, “but to regulate hostility without inflicting injury is the Art of Peace.” Drunken boxing differs from most other martial arts in that it is not a formal martial arts curriculum but rather a fighting technique that may be adapted into a variety of disciplines. It is as much about deceit and unpredictability as it is about tactics. Drunken boxers emulate drunken boxers.

The idea is to seem inebriated, lull the opponent into a false sense of security, and then strike when their guard is down.

Many martial arts encompass more than simply self-defense methods; they also incorporate spiritual belief systems, personal behavior ideals, mental efficiency aids, or all of the above. Judo is a mind-body martial art that evolved from jiu-jitsu. Keysi professes to be a self-defense method rather than a martial art. It aspires to be a practical combat system that employs the body’s most resilient components for offensive and defense while safeguarding its more vulnerable sections (hands, torso, face). It also avoids kicking to avoid sacrificing the legs as a platform. Like other martial arts, Pencak Silat is developed for close-quarters combat, according to Black Belt magazine. Silat combatants start a fight by closing in on their opponent and moving to a place known as the “battleground.” Instead of fists, Silat competitors strike their opponents’ weak places with swift and brutal knee, elbow, and head attacks. This process is known as “tranquilization.”

13. Wushu In ‘The Once Upon a Time in China series, Shaolin Temple, Kids from Shaolin, Martial Arts of Shaolin’ Like other martial arts, Pencak Silat is developed for close-quarters combat, according to Black Belt magazine. Silat combatants start a fight by closing in on their opponent and moving to a place known as the “battleground.” Instead of fists, Silat competitors strike their opponents’ weak places with swift and brutal knee, elbow, and head attacks. This process is known as “tranquilization.”