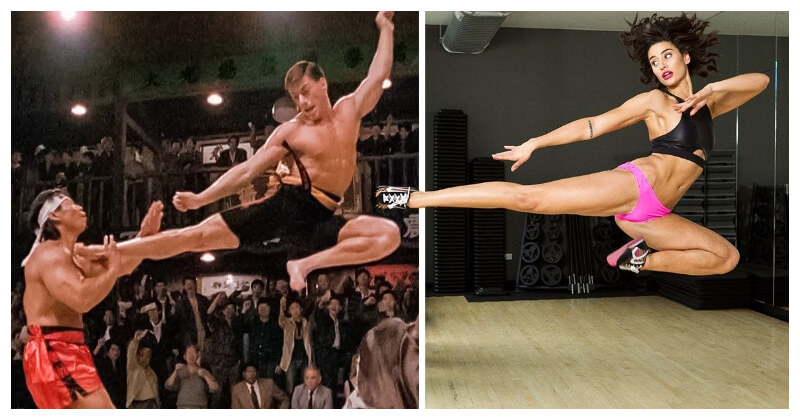 It’s exciting to see the younger generations from our favorite celebrity families grow up and go into the same profession as their parents. While some celebrities’ children take their own path, some follow their parents’ footsteps and have already outshined their parents. Although their parent’s popularity has opened doors for them to be successful, we can not blame children for being born with silver spoons in their mouths. Most of them have made considerable efforts to achieve fame.

For example, Kaia Gerber, the daughter of supermodel Cindy Crawford, is a fashion week star, having walked the runway for such enormous fashion houses as Max Mara, Fendi, and Moschino. Famous designer Donatella Versace reportedly said that Kaia is a special girl, she is like her mother. However, the young model doesn’t want to live in her mother’s shadow.

Below are 11 children of celebrities who rock like their parents. Bianca Van Varenberg is the daughter of famous actor Jean Claude van Damme. She was determined to be in the Olympics as a speed skater but an injury cut short her career. After that, she decided to practice martial arts and pursue an acting career. Angelina Jolie shared the scenes with her little daughter, Vivienne Marcheline Jolie-Pitt in the movie “Maleficent”. The lovely girl played young princess Aurora when turning 5. Jolie revealed that her character went to Vivienne because she was the only child who wasn’t scared of her. Brooklyn Beckham is one of the highest-paid models. He began modeling professionally in 2014 and has appeared in editorials and on covers for Vogue China, Miss Vogue, Interview, L’Uomo Vogue, Dazed Korea, and so on. Lourdes Leon is one of the most successful actresses and models at a young age. She was interested in the fashion industry and then started her career at the age of 13. She even helped her mother, the actress Madonna, choose her clothes while going out for events. Ida Lundgren is the daughter of action movie actor Dolph Lundgren and fashion stylist desinger Anette. She often works hard in the gym with her father to do active training. She also follows in her mother’s footsteps to build a career in the fashion industry. Kelly Osbourne is the daughter of rock singer Ozzy Osbourne. She was propelled into the spotlight when MYV aired their reality show, The Osbournes. She was cast in many movies such as “Austin Powers in Goldmember”, “So undercover”, The Town That Boars Me”, “Should’ve Been Romeo”, etc. She has built a career in the music, and fashion industry. Kaia Gerber is best known for being the daughter of supermodel Cindy Crawford. She started her modeling career at the age of 10 and has now become one of the lead models in the entertainment industry. She starred in a number of advertising campaigns for fashion brands and won many awards. Rumer Willis is the eldest daughter of Hollywood actors Bruce Willis and Demi Moore, who have supported her acting career. She started her career with minor roles alongside her parents and went on to become a celeb in her own right. She is a versatile actress who has appeared in varied roles, ranging from comedy to horror movies. Mick Schumacher, son of legendary seven-time F1 World Champion, Michael, is a famous racing driver. He began his career in karting in 2008, progressing to the German ADAC Formula 5 by 2015. 3 years later, he took the European F3 Championship by storm, winning eight of 15 races. Rafferty Law is a fashion model and an entrepreneur. He is famous for being the son of the actor Jude Law and Sadie Frost. In 2014, he started his career as a runway model and then debuted his catwalk for DKNY. He was represented by the well-known model agency Select Model Management. Coming to 2021, he is busy starting his music label and creating his tunes. Lily-Rose Depp, the daughter of Hollywood star Jonny Depp and singer Vanessa Paradis, began her acting and modeling career at an early age.  She rose to fame after appearing in films such as “Tusk”, “The Dancer”, “Planetarium”, and “The King”. Apart from that, she is quite popular on social media as she has over 6 million fans following on Instagram and thousands of followers on other platforms.