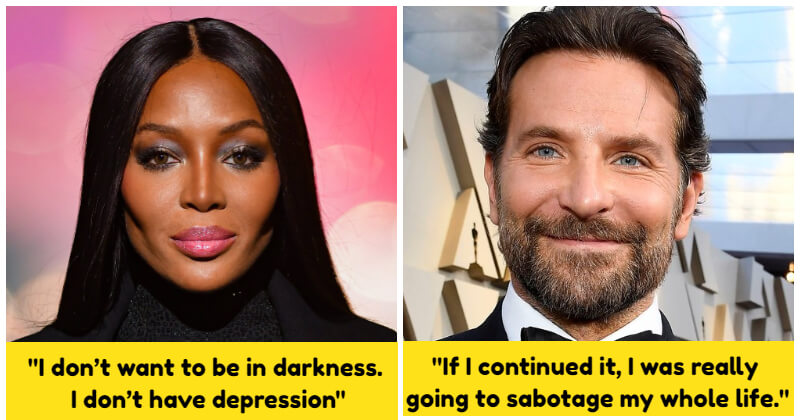 Stories of people with alcoholism are common. We all know someone who can’t stop themselves after one drink. Or worse, can go through the day without a drink. Many turn into raging monsters after taking their poison.

In the celebrity realm, these stories are even more rampant. To cope with the crushing pressure of the spotlight, many celebrities resource to alcohol. Whether it’s chardonnay or vodka, the buzz they get from just one swirl is a fine taste.

Due to their fame, stories of alcoholic celebrities spread fast, and are wildly known. Among these, the ones who abuse alcohol, and die from liver failure or reduced cognition are used as cautionary tales. But many others who have overcome their addiction are the inspiration for other recovering alcoholics.

Read these 14 inspirational stories of recovered alcoholics, and see for yourself how these raging monsters come back to themselves via their stories. Daniel Radcliffe has been candid about his alcoholism throughout his career. In 2020, he stated that the conclusion of the Harry Potter film franchise contributed to his decision to resign.

For Daniel, when he got drunk, it wouldn’t be himself who does. It would be “Harry Potter smashed on the bar.” And so, he continued to drink more as a way to deal with the funny correlation.

Radcliffe added that near the end of the film, he realized he needed to give up drinking in order to go on. The actor, now 32, has been sober since 2010, a year before the final Harry Potter picture was released. For Megan Fox, cutting out alcohol is a kind of self-care.

The 35-year-old actress revealed on the April cover of Glamour magazine that she had been alcohol-free for more than a decade. For Megan, drinking feels like extracting her essence; it disconnects her from her spirituality.

She also stated that she does not smoke or drink coffee, stating that doing so allows her to connect with her “higher awareness.” In December 2020, Chrissy Teigen announced she was four weeks sober.

That same month, Teigen said on her Instagram Story that it was after she got Holly Whitaker’s book Quit Like a Woman: The Radical Choice to Not Drink in a Culture Obsessed With Alcohol that she realized it was time to stop drinking for good.

In particular, she related to going from having one drink in hand, to having another, to having a lot more in a day.

After her miscarriage, Chrissy admits it was hard, but stays determined not to fall off the wagon. In 2018, Anne Hathaway chose to stop drinking for good. The next year, she told Ellen DeGeneres why. She stopped drinking in October of 2018.

For Anne, the hangover when rearing her first child was enough incentive to stop her from ever touching alcohol again. Naomi Campbell checked herself into a recovery clinic in 1999, after a five-year cocaine and alcohol addiction. She’s been going to Narcotics and Alcoholics Anonymous, and counseling for years.

Campbell quit drinking for good in 2013. The supermodel has decided not to drink anymore since she is now allergic to alcohol. Naomi said she now had more energy and more fun than when she was drinking. She can stay out late and wake up early in the morning without feeling hungover. Not only has Jada Pinkett Smith struggled with alcoholism, but so has her family. The actress has come from a household where taking too much alcohol is the norm.

The actress realizes she might be having a problem when she was going through three bottles of wine per day.

Pinkett Smith has struggled with different addictions throughout her life, including sex addiction, gym addiction, and alcohol addiction.

She stated she had to go “cold turkey” to break all of them. Bella Hadid said that she had stopped drinking totally after participating in Dry January earlier this year.

In an interview with InStyle, the supermodel confessed that she had reached a point where she could no longer control herself on evenings out.

Despite just participating in Dry January for the first time in 2022, Hadid began considerably reducing her alcohol consumption in mid-2021. Lana Del Rey’s last drink was nine years ago. When she was 14, Lana was sent to a boarding school to become clean. At the time, she was a heavy drinker who drank every day. To her, the entire concept was quite fantastic.

She realized it was an issue when she preferred drinking over doing anything else. It was the most terrible thing that had ever occurred to the singer. The DJ Calvin Harris has openly discussed his reasons for quitting drinking.

People would pay to watch him perform and he’d be terrible. For the DJ, the disappointment from the audience wasn’t worth it.

He also stated that he did not stop because he had a drinking issue. It was certainly having an impact on what he did for a living. Why would I waste time drinking and going to parties when I could sit in a studio and create music? Sia declared her eight-year sobriety in September 2018. The singer discussed her troubles with James Corden during an appearance on The Late Late Show’s Carpool Karaoke.

Sia was an alcoholic and a drug addict. When she was becoming somewhat famous, it was destabilizing her life in some respects. Jennifer Lopez does not drink for a different reason.

It’s because alcohol destroys her skin, something the Latin diva cannot have. Even during toasts, Jennifer Lopez only symbolically takes a sip from her glass. Bradley Cooper said in 2013 that he gave up drinking for good in the early 2000s.

The Star Is Born star stated that had I continued drinking, he was truly going to wreck his entire existence. Kristin Davis, star of And Just Like That…, explains why she quit drinking in 2008.

I knew it wasn’t going to end nicely. I was accepted into the acting program but am struggling in my academics. It’s either one or the other. I can’t have it both ways. In 2005, Ewan McGregor told Playboy that he quit drinking before it wrecked his life.

The actor knew he was fortunate, and that if he didn’t quit, his career, family, and life would fall apart.

Closer Look At The Leading Actors From The Young Royals Cast: Is Edvin Ryding A Prince In Real Life?

Before Will Smith, These 5 Celebrities Were Also Banned By The Academy

Where Does Shaun White Live? Where Is His Next Mountain?