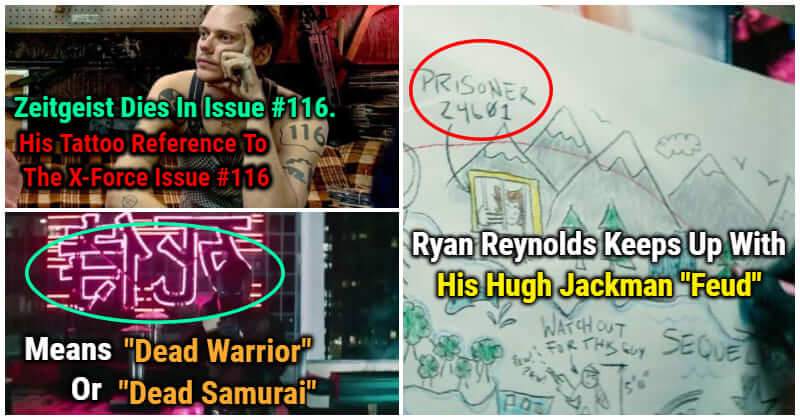 When developing the Deadpool movies, Ryan Reynolds made sure to keep the vibe of the comics and respect the source material. In both Deadpool and Deadpool 2, he excelled at both. There are so many minor elements in Deadpool 2 that it’s hard to see them all on your first viewing.

Deadpool 2 only improves on the Merc With The Mouth’s first and memorable appearance, with blink-and-you’ll-miss-it cameos from some of Hollywood’s greatest names and references to the original picture. And below are the 24 fascinating details in Deadpool 2 that you may miss before 2. There’s a big nod to a comic-book agency. Showing up in Deadpool 2, the timeline is a bit off (since X-force didn’t exist yet). The MRD is mentioned in the Avengers universe as Steve Rogers doesn’t approve of it.

3. Deadpool’s Name Is Literally Written On This Sign In Chinese 4. Even the deleted scenes include details that are missing. In Deadpool 2’s “Inside the X-Mansion” deleted scene, several velcro name tags are on a plate referencing several of the X-men, including one called “Wheels.” This refers to what Wolverine calls Professor X the first time they meet in X-Men (2000).

5. Zeitgeist With A Unique Tattoo 6. The films of director David Leitch have a signature timepiece. In Deadpool 2 (2018), Cable’s time machine is a Carl F. Bucherer watch. Other Carl F Bucherer watches have appeared in other David Letich films such as John Wick 2 and Atomic Blonde.

7. Wade is a well-read person. In Deadpool 2, Wade is reading the same book John Candy reads in Planes, Trains, and Automobiles.

In Deadpool 2, director David Leitch can be seen in a brief cameo during the convoy chasing scene. He’s the first prisoner Cable throws off the truck to stop Deadpool. Wade Wilson, as shown in the first Deadpool film and in the comics, is a huge fan of iconic actress Bea Arthur, as demonstrated by his Bea Arthur tee shirt at the start of the film.

“Bea” is inscribed into the pommel of one of Deadpool’s katanas in the opening credits of Deadpool 2, while the other is supposed to be engraved with “Arthur.” This fact was pointed up by u/ThatGamingguy99.

10. Cable has it down to a science when it comes to time travel. In Deadpool 2, Cable sees the X-Jet landing at the Essex House as the point of the past he wants to travel to. Later we see the same shot of that happening in current time.

11.  A Special Moment Between Wade And Juggernaut In Deadpool 2 Wade tells the Juggernaut “It has always been a dream of mine to see my face reflected in your helmet as you charge at me with murderous intent.”, that’s exactly the cover of one of Deadpool’s comics. In Deadpool 2 (2018), Wade wears a shirt that says: “Olivia & Meredith. Best Friends Purrrr-ever”. The two cats actually belong to Taylor Swift. The production crew had to get permission from her to use their image. In Deadpool 2, Yukio and Negasonic’s cup says “I’m with her” with arrows pointing towards each other.

14. Ryan Reynolds Gave Some Additional Voice Work In The Movie In Deadpool 2 (2018), Ryan Reynolds himself voices The Juggernaut, later stating that “we didn’t settle on that because it was quality. We settled on it because we just didn’t have any more budget left to jump in.” In Deadpool 2, while having a conversation with Cable, Wade wears the same floral shirt that Chunk wears in The Goonies (1985). This is a nod to Josh Brolin’s first big Hollywood movie.

16. David Leitch Had A Unique Credit As Director In Deadpool 2, the director was “one of the guys who killed the dog in John Wick”, he was referring to David Leitch, and John Wick was his directorial debut (uncredited) with co-director Chad Stahelski. In Deadpool 2, during a fight scene with Cable, Wade is heard saying “give me your best shot, one-eyed willy” – refering to The Goonies, Josh Brolin’s first film. In Deadpool 2, Cable repairs one of his guns using a knob from a guitar. Later you can see that that knob goes to 11, a reference to the movie Spinal Tap.

19. Deadpool Utilizes The 4th Wall To His Edge

In Deadpool 2, Wade realizes from where the shot came because he sees how the blood splashed the camera