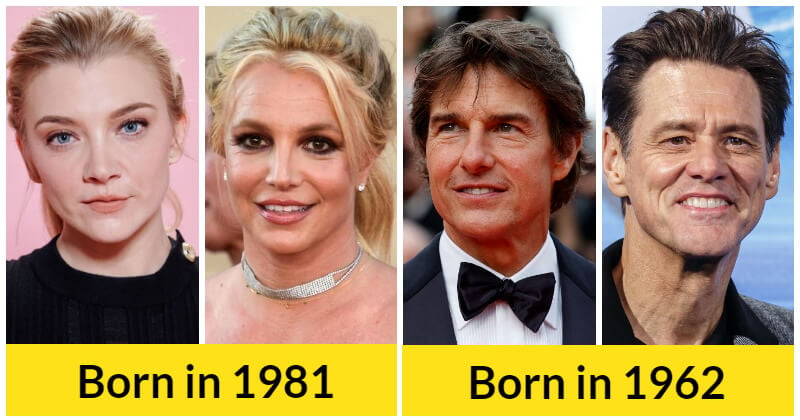 Some people are blessed with such good genes as they age like fine wine. Others, not so much.

That is why is usually shocking to see actors of the same ages look generationally apart. Especially for actors who have longevity in their careers. We watch them age on screen, year by year. While some age less gracefully, others make us wonder if they have found the Fountain of Youth.

In Hollywood, ageism exists, and actors are rewarded with jobs when they look young. Or at least younger than they actually are.

This is even more evident when these actors share a scene. Our minds are blown, fascinated, and mesmerized watching actors playing father and son when they are literally the same age?

While we definitely should not promote agism, we can still appreciate these actors who act like fine wine. Take a look at these actors who share the same age, and how wildly different they look from each other. Gwen Stefani, lead singer from No Doubt, and actress Jennifer Aniston, best known as Rachel from Friend, are both born in 1969. Actress Anna Kendrick, best known as Beca in the Pitch Perfect series, and Scarlett Johansson, MCU’s Black Widow, are both born in 1984. Award-winning actress Angelina Jolie and talkshow host and comedienne Chelsea Handler are both born in 1975. Emma Watson, who plays Potterverse’s Hermione Granger, and Margot Robbie, who plays DCU’s Harley Quinn, are both born in 1990. The eldest of the Kardashian sister, Kourtney, and actress and the second Mrs. Cruise Katie Holmes, are both born in 1978. Halle Berry, who plays X-Men Storm, and Cynthia Nixon, who plays Sex and the City’s Miranda are both born in 1966. Tom Cruise, who plays Ethan Hunt from the Mission Impossible franchise, and The Mask, and Jim Carrey, who plays Batman’s rogue The Ridler, are both born in 1962. Paul Rudd, who plays MCU’s Ant-Man, and Matthew Perry, who plays Chandler Bing in Friend, are both born in 1969. Shemar Moore, who Special Agent Derek Morgan in Criminal Minds, and Nick Offerman, who plays Director Ron Swanson in Parks and Recreation, are both born in 1970. Latinpop queen Jlo, and Bridget Jones Renée Zellweger are both born in 1969. Daniel Radcliffe, who plays The Boy Who Lives Harry Potter, and G.I. Joe’s Cobra Commander, played by Luke Bracey, are both born in 1989. Talkshow host Ellen DeGeneres and Queen of Pop Madonna are both born in 1958. Miss Congeniality, played by Sandra Bullock, and Frasier’s Matchmaker Charlotte Connor, played by Laura Linney, are both born in 1964. Mario Lopez, who plays Save By The Bell’s Slater, and Adrien Brody who plays The Pianist’s Władysław Szpilman, are both born in 1973.

No Group Can Compare To BTS When It Comes To International Popularity?

Then And Now: 10 Sets Of Siblings That Were Child Stars