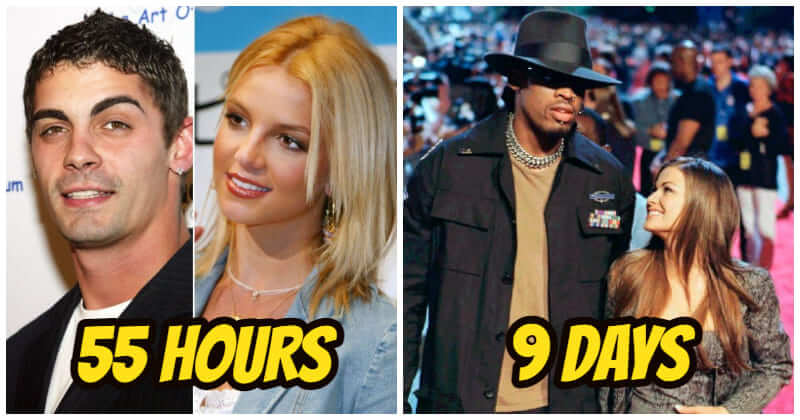 When a couple gets married, they’re usually told to keep an eye out for the so-called “seven-year itch,” which occurs after they’ve thoroughly settled into their marriage and may begin to feel a bit restless. However, for some, the honeymoon period ends far before they reach the seven-year mark.

While whirlwind marriages and quick divorces are obviously common in everyday couples, they appear to affect Hollywood lovebirds at a disproportionate rate. When celebrities divorce, the entire world knows when, why, and how they decided to call it quits. Even more so when that life-long commitment lasts less than a year or, in some cases, less than a month. Here are the five shortest celebrity marriages that made a mockery of love: This was likely one of the most-talked celebrity marriages of all time, but in case you missed it, here’s a recap. In May 2011, NBA player Kris Humphries proposed to reality star Kim Kardashian on one knee. They married in August of that year, and by Halloween, they were divorced. Everyone assumed their 72-day wedding was a public relations stunt orchestrated by the Kardashians and E! Entertainment, but all parties have denied the allegations. Mario Lopez’s six years of dating were definitely insufficient to prepare him for marriage. Ali Landry discovered her new husband had cheated on her soon after their 2004 Mexican wedding. Let’s just say his bachelor celebration was a touch too much for him. We can’t imagine how upsetting it must have been for her to find that, especially since they’d only been married for a few days when the truth was revealed. It’s no surprise that the actress filed for annulment two weeks later, citing “irreconcilable differences” and “fraud” as her reasons for divorce. Eddie Murphy and Tracey Edmonds exchanged vows in a spiritual wedding on New Year’s Day in Bora Bora. The couple had planned to make their marriage legal, but later issued a statement saying that after much research and deliberation, they had mutually decided that a formal ceremony was not necessary to further define their partnership. They also stated that, while their recent marriage demonstrated their spiritual love, friendship, and respect for one another, they chose to remain friends. It may surprise you to find that Carmen Electra’s marriage to Dennis Rodman lasted only 9 days. The pair barely made it through the first week of their romance before breaking up, making it one of the shortest celebrity marriages. Carmen Electra later urged people not to marry in Las Vegas.” The couple married in a Sin City-style wedding at the Little Chapel of the Flowers on November 14, 1998. Rodman was the one who requested the annulment nine days later. He blamed the divorce on “fraud” and “unsound thinking.” This marriage lasted a total of 55 hours. It has been 55 hours. This record-breaking marriage ended just two days after it became legal. After ringing in the new year in 2004, the pop star headed to Las Vegas to marry her childhood friend. Hours later, a court annulled their “joke” marriage, and the story comes to a conclusion. In an interview, she stated she was being stupid, rebellious, and not accepting full responsibility for her actions.