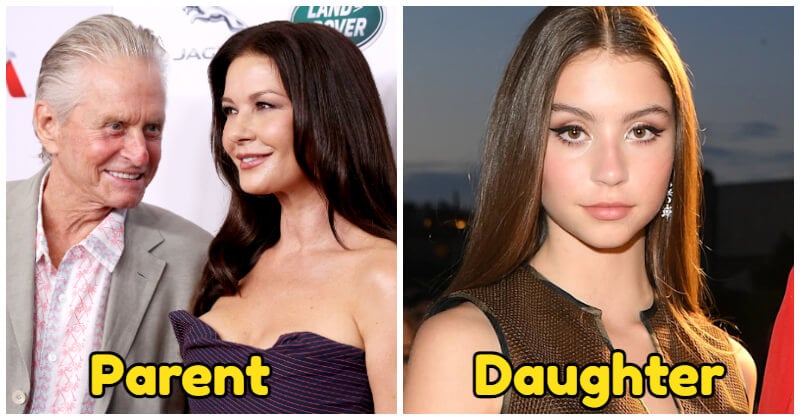 Do you ever feel envious of gorgeous celebrity daughters’ lives? It must be amazing to be a celebrity kid!

One thing is sure about these celebrity parents and their daughters: they have a strong gene game. Because their parents had some of the most beautiful genes on the globe, it’s no surprise that their daughters grow up to be stunning. Not only are you gifted a beautiful appearance and potentially your parents’ talent, but you can also have a lot of money and fame from the day you were born! Fate awarded these stunning celebrity daughters the silver spoon. All they had to do was not bumble it away.

After all, it can’t be easy growing up in your parents’ shadow. However, standing out has never been an issue for these beautiful and talented children. Let’s check out a few celebrities’ daughters who are no less charming than their parents. Marshall Mathers (aka Eminem) and his ex-wife Kim Scott have a daughter, Hailie Scott Mathers, who was born on December 25, 1995. Many of her father’s songs have been written about her, and he has stated publicly that she is his greatest inspiration. Sting (Gordon Matthew Thomas Sumner) and actress Trudie Styler had a child named Eliot Paulina Sumner. Sumner was born in Pisa, Italy, and raised in Wiltshire, England. She attended Bryanston School and afterward the Fine Arts College in London. Now she is known as an electronic music producer, actress, and musician. Iris Tallulah Elizabeth Law, the daughter of Sadie Frost and Jude Law, was born on October 25, 2000. Rafferty and Rudy are her two brothers, and Kate Moss is her godmother. After six years of marriage, her parents decided to split in 2003.

In July 2002, Law debuted in Vogue alongside her parents and brother Rafferty. She made her formal modeling debut in December 2015 for Illustrated People and was included in Miu Miu’s Resort 2017 lookbook. Harley Quinn Smith (born June 26, 1999) is the daughter of filmmaker Kevin Smith and actress Jennifer Schwalbach Smith. She was born in Red Bank, New Jersey. She is an actress from the United States of America and has acted in her father Kevin Smith’s films “Tusk” and “Yoga Hosers”, both of which he wrote and directed. Carys Zeta Douglas is the daughter of Oscar winners Catherine Zeta-Jones and Michael Douglas. Carys has already built a name for herself in the world of fashion. She’s also worked for a few high-end fashion brands. She’s also appeared in several television shows. Carys has a brother and a half-brother who are both older than her. Sosie Ruth Bacon is an American actress and the daughter of actors Kevin Bacon and Kyra Sedgwick. She was born on March 15, 1992. Bacon’s first role was in Kevin Bacon’s film “Loverboy”, in which she played Emily, a 10-year-old girl.

Bacon’s parents were adamant that she not pursue a career in acting. Bacon, on the other hand, began her studies at Brown University and has also studied at the CAP21 musical theatre group. She has now appeared in several films. Stella Banderas-Griffith is an actress from Spain. She rose to fame as the daughter of Antonio Banderas and Melanie Griffith.

She grew up to be one of the most well-known girls in her school. In 2003, she and her father appeared as guests on the comedy game show “Banzai.” She also attended the “61st Golden Annual Golden Globe Awards” with her parents. Since then, Stella hasn’t acted in any films and is concentrating on finishing her schooling. Zoe Isabella Kravitz is an actress, singer, and model from the United States. She was born on December 1, 1988. She made her acting debut in the romantic comedy film “No Reservations” (2007) and had her breakthrough in portraying Angel Salvadore in the superhero picture “X-Men: First Class” (2011), which won her Teen Choice Award and Scream Award nominations. Paris Jackson is Michael Jackson’s daughter. She is a model and actress in her own right, aside from being the daughter of a celebrity. She made public appearances and even starred in documentaries about her father. Paris has acted in films and worked as a model. She has a sizable social media following and a considerable net worth to continue her father’s legacy. Georgia May Jagger was born in London, United Kingdom, on January 12, 1992. Mick Jagger is her father, and Jerry Hall is her mother.

Georgia is a very famous fashion model, and movie star today. She was also enthusiastic about the entertainment and celeb world. Following her career, she has walked many fashion shows and has also been associated with different modeling agencies as of now like TESS Model Management. DeVito is the daughter of actors Danny DeVito and Rhea Perlman. She was born in Las Vegas. In 2005, she earned a bachelor’s degree in drama from Brown University. She is an American actress who starred in the 2009 comedy “Leaves of Grass” as Anne Greenstein. She has appeared in a few of her father’s films, including “Noble Son.” Sistine Stallone is the second daughter of Oscar-nominated actor Sylvester Stallone and former model Jennifer Flavin. She studied communications at the University of Southern California. She is an actress and model. Sistine made her acting debut in Johannes Roberts’ survival horror thriller “47 Meters Down Uncaged” as Nicole. Rowan Atkinson’s daughter, Lily Sastry, was once known as Lily Atkinson. Lily is a well-known performer and burlesque dancer in her own right. Lily began her career as a kid performer in the entertainment industry. She is currently working as a dancer and vocalist, and her performances have received positive media attention.