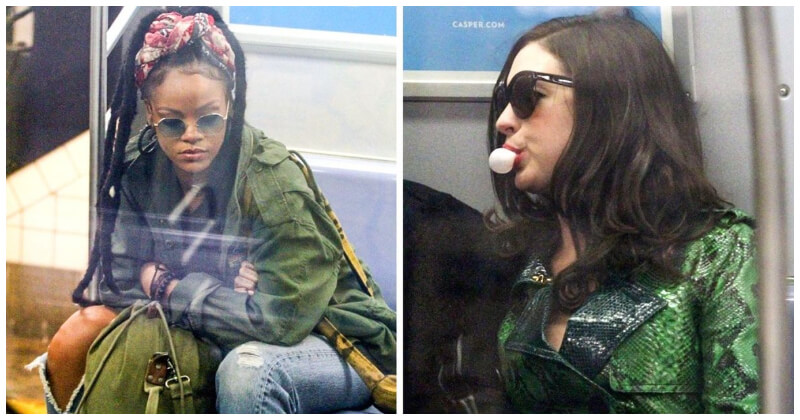 We usually associate celebrities with glamorous lifestyles. We assume they have a net worth of millions of dollars and lead a luxurious life. Many famous often show off their wealth through their fancy cars, luxury brands, expensive pieces of jewelry, luxurious houses, etc.

However, some A-listers lead a surprisingly ordinary lifestyle. They often use public transport, stop by roadside shops, and do not suffer from star fever. Sometimes fans could easily meet them while walking down the street.

If you’re curious about celebs who couldn’t care about their high status, scroll down to see. The talented singer Rihanna has a successful career. Despite owning many luxurious cars or lavish homes, the businesswoman often uses public transport and lazes in front of the TV. We generally don’t expect to run into the rich and famous while sitting on the subway, but sometimes it happens. Oscar-winner Anne Hathaway has been spotted taking the train, albeit oftentimes hiding behind sunglasses or wearing hats. Drew Barrymore runs her own makeup company, but sometimes she just wants to go barefaced. In some selfies on Instagram, she’s completely makeup-free. The young actress Dakota Fanning has been spotted sitting on the subway. She also knits scarves for colleagues and never hides from the paparazzi. Michael Douglas prefers to be out of the spotlight for a simple life. He often takes his daughter to school by subway and doesn’t enjoy being photographed when they are out. Since her split from Tom Cruise, Katie Holmes has enjoyed a very normal life. Fans often meet her and her daughter on the subway. Jennifer Lopez says she dreams of a life that’s more simple and more organic. As achieving a successful career, she works a lot, supports a children’s hospital, and acts as a human rights activist. Paul Wesley is known for the role of Stefan Salvatore in the series “Vampire Diaries”. In his free time, he prefers to play hockey, sort out the strings on the guitar and ride a snowboard. Jake Gyllenhaal is one of Hollywood’s leading hunks but he stays incognito and pulls off a homeless outfit. A Redditor spotted the actor dressing “like a semi hip-hoppy teen” on a train.

Henry Cavill Is Back As Superman In Upcoming DC Movies