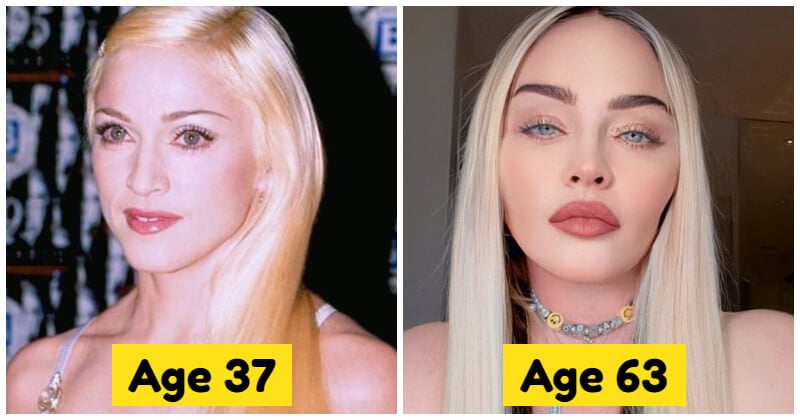 Oh, to be young once more. I’m sure that this desire comes out when you take a look at an old photo album. It was a time when you didn’t have permanent eye bags, your hair appeared fuller, and your youth didn’t pass you by so swiftly. However, some superstars don’t need to wish! They somehow avoid the passage of time, remaining as young and attractive as they were a decade ago.

Let’s take a look at those celebs who don’t need to worry about aging signs. We’ve made 16 side-by-side comparisons of celebs through the years. From Madonna to Beyonce, check it out and see if you can tell which photo is from the past and which is from the present day (without our year marked). I bet it’s more difficult than you think. While the Friends actress is best recognized for her sleek and chic coif, many people also like Aniston’s youthful-looking glow. In May, she shared that her secret is the collagen protein powder that she puts in her smoothies. Many of us first saw Witherspoon when she was a child in the movie “The Man in the Moon”. Since then, Witherspoon has acted in a slew of award-winning films and has established herself as one of Hollywood’s most sought-after actresses. And the Oscar winner doesn’t look a day older than 30 at the age of 42. In addition to hiking and practicing yoga on a regular basis, Witherspoon is known for wearing sunscreen and keeping hydrated by carrying a water bottle with her. This year, our favorite “material girl” turned 63 but with her light skin, she doesn’t look older than 30. Her beauty guru revealed the singer’s secret is to use a face cleanser, eye serum, and face serum from her own MDNA skincare line. At the age of 50, Berry has skin many women decades younger. She feels that focusing on cardio as part of her fitness routine and routinely using products from Los Angeles skincare guru Olga Lorencin are related to healthy-looking skin. Thanks to her youthful bright skin, it’s difficult to imagine the actress is 52 years old. Staying hydrated, carefully using sunscreen, and always removing her makeup at night are some of her beauty secrets. It’s hard to believe but not only has the singer maintained her signature “red lip, bleached hair” appearance for the past 9 years, but she also looks as stunning as she did in 2010! Gwen discovered a new anti-aging technique: falling in love. The singer told that her relationship with Blake Shelton is like an immediate facelift. Even though Stefani is a pop music veteran, we can’t believe she’s 52 years old. The 49-year-old singer and actress doesn’t hold back when it comes to sharing her gym routines on social media. It’s no surprise that she doesn’t appear to be her true age, given her rigorous workout routine, nutritious diet, and dedication to protecting her skin with sunscreen. We wouldn’t think the Goop founder is 47 even if she didn’t makeup. Her beauty secrets are significantly more straightforward than her website’s nutrition advice. Last year, Paltrow told Harper’s Bazaar that she exfoliates her skin by dry brushing before and after showering, and she uses Vinter’s Daughter’s Botanical Serum to moisturize dry skin. Reeves was noted for unconventional roles in films such as “Bill and Ted Face the Music”, “Speed”, “The Matrix franchise” and “My Own Private Idaho”. Sure, Reeves has more facial hair and has appeared in more film series since then, but you couldn’t tell how old he is by looking at him. Beyonce began her career as a member of the R&B group Destiny’s Child before becoming a music legend. The singer/actress continues to look like she just stepped out of her debut music video two decades, several Grammys, and a handful of film appearances later. McConaughey was known for a now-famous Dazed and Confused catchphrase when fans first saw him: “Alright, alright, alright!” Despite the fact that McConaughey has moved on from his Dazed days, he still looks like he could play David Wooderson in a heartbeat. This year, the “Good Will Hunting” star is 50 years old. During his career, he has received numerous awards and nominations, including an Academy Award and two Golden Globe Awards, as well as three British Academy Film Awards, six Screen Actors Guild Awards, and seven Primetime Emmy Awards. Some of his most famous films: “Dogma” (1999), “Jay and Silent Bob Reboot” (2019), and as a Loki actor in the Marvel Cinematic Universe (MCU) films “Thor: Ragnarok” (2017) and “Thor: Love and Thunder” (2023).