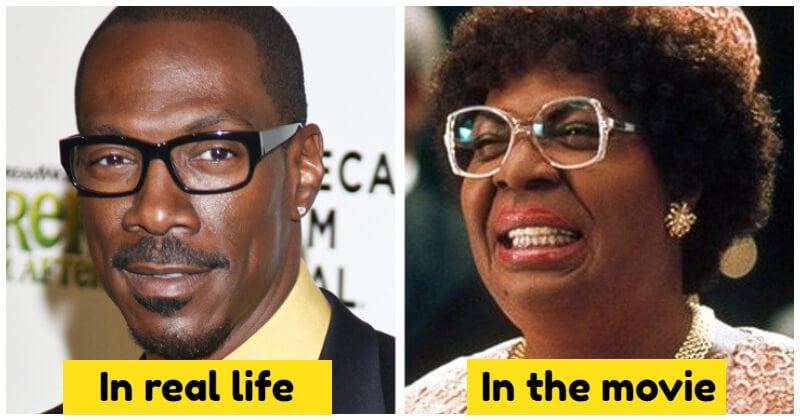 Cross-dressing in acting is a centuries-old tradition. Over the years, many actors do the unthinkable to fulfill their roles, from shaving their hair to starting an extreme journey of weight gain or loss. Although it’s not easy to transform from the feminine to the masculine side or vice versa, many have given a masterful performance.

For example, Martin Lawrence stars as an FBI agent and as a master of disguises in the comedy film “Big Momma’s House”. He goes on a tough undercover mission: he becomes Big Momma, a Southern grandmother of ample girth and reputation to capture criminal Lester Vesco. The image of a flatulent fat old woman seemingly sticks in many viewers’ minds.

Here are 12 celebs who immerse themselves in their character of the opposite gender. Jared Leto earned a Golden Globe and Academy Award for his role as Rayon, a transgender woman who was HIV-positive and struggling with a drug habit in “Dallas Buyers Club”. During the filming of the movie, the actor “had to a wig on, a dress and put on some lipstick”. The makeup was just one thing, he had dropped about 30 pounds and waxed his body from head to toe. Anger Management is a 2003 comedy film, portraying the life of a businessman who is sentenced to an anger management program. In the movie, Woody Harrelson played a tranvestite prostitute, a small part but he made viewers remember his character. Jude Law certainly gets in touch with his feminine side for his role of Minx in “Rage”. The actor played a transvestite supermodel living in New York, the centre of a fashion murder mystery. He put on a black wig with heavy black eyeliner to fulfill his role.

#4 Eddie Murphy as Mama Klump in “The Nutty Professor” In “The Nutty Professor” (1996), Eddie Murphy played seven characters at the same time, including Mama Klump. The film received positive reviews and many critics praised Murphy’s makeup and performance. Big Momma’s House is a 2000 comedy that makes many people laugh with its humorous scenes. In the movie, Martin Lawrence portrayed an FBI agent who dressed as a fat old lady, Big Momma, to catch the notorious criminal Lester Vesco. The Award-winning actress Glenn Close was in the role of Albert Nobbs, a woman disguised as a man to survive and work in 19th century Ireland. The character is quiet and stiff, with cropped hair and a low, halting voice.

#7 Meryl Streep as The Rabbi in “Angels in America” Meryl’s talent knows no bounds. Many people didn’t realize her role as The Rabbi in “Angles in America”. She portrayed an elderly rabbi who visits the bedridden protagonist to hear his confession. The role earned her an Emmy Award for Outstanding Lead Actress.

#8 Tyler Perry as Madea in “A Madea Homecoming” Tyler Perry played Madea, a gun-toting elderly lady who cursed and found herself at odds with the law. The movie marked the debut of the iconic character in Tyler Perry’s stage productions.

#9 Michael J. Fox as Marlene McFly in “Back To The Future” Source: © Debby Wong/ shutterstock.com, © Back to the future / Universal Pictures

Michael J. Fox was in the role of Marlene McFly, the future daughter of Marty McFly and Jennifer Parker in “Back To The Future”. Fox’s Marlene is pretty convincingly female with simple outfits.

#10 Tilda Swinton as Orlando in “Orlando” The filmmaker Sally Potter released a classic adaptation of Virginia Woolf’s classic novel. The strongest image is Orlando, played by Tilda Swinton, who had red hair, pale skin, and intense eyes. It was a surprise that the actress used no tricks to transform into a man: no mustache, no sideburns, no deep voice. Lithgow’s film breakthrough came after playing a transgender woman, Roberta Muldoon, who was a former football player in the comedy-drama “The World According To Garp”. The actor was nominated for an Academy Award for Best Supporting Actor for his role. “The Man” is a song recorded by American singer Taylor Swift. In the music video, she played a manspreading, cigar smoking, strip-club-going male business executive. Her makeup artist revealed that her transformation took four to six hours.