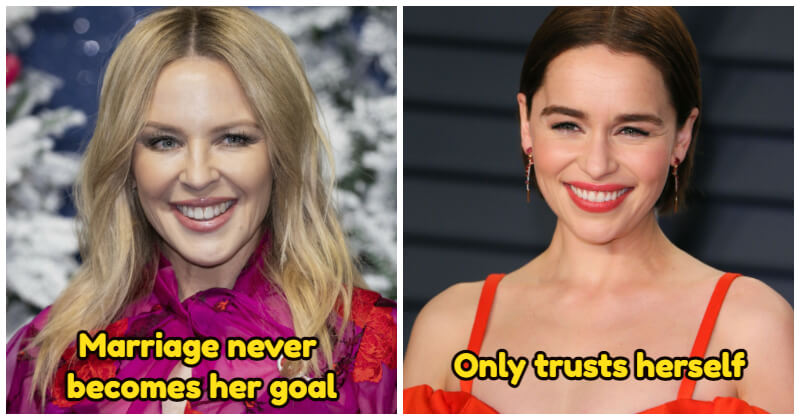 An increasing number of women are choosing to stay single. For them, being single isn’t a bad rap. They feel free when they can sleep all day on their bed, eat chips on the sofa and never have to compromise with their partner.

Hollywood is also full of women who are happy to be single. They are happily self-partnered, whether they’re long-term singletons or they’ve carved out a life for themselves that doesn’t depend on a significant other. They neither get anything against love nor ridicule people who fall in love. However, when it comes to their own romantic lives, they don’t believe that settling down into a couple is not the ultimate mark of success in life. Instead, they devote their time and energy to their career, families, and even themselves. They make their single life look like an adventure, a not-so-scary choice.

Here are 12 famous women who decide not to tie the knot and have no regrets. Despite being single, Charlize Theron isn’t in a rush to get into a relationship. Instead, she becomes a mother of two adopted African-American girls, Jackson and August. She shared that marriage was an important thing to her so she never felt lonely. Emilia Clarke is one of the famous stars in the entertainment industry. It is a surprise that now she’s still single. In fact, she dated some actors but currently, she is not interested in it. She thinks that a good relationship between actors is rare and it needs a ton of trust. Clarke only trusts herself. After the break-up with Joshua Sasse, Kylie Minogue is happy living the single life. For her, engagement is an experiment, and marriage never becomes her goal. Diane Keaton is one of the most beautiful and independent Hollywood stars. She had the pleasure of dating some famous male actors back in her day, but she never got married. At the age of 50, she became a single mother in life. Oprah Winfrey has been in a relationship with former basketball player, Stedman Graham for over 30 years but she don’t want a marriage. For her, being a mother and wife is a tough job. Lucy Liu has become a first-time mother after welcoming a son, Rockwell, via surrogate. She has enjoyed her life with her son and has not been in rumors about her relationships. The Desperate Housewives star is happy to describe her life as containing “no pets, no plants, no children”. Although Dana Delany has many opportunities to get married, she chooses a single life. When it comes to Winona Ryder’s personal life, she has been linked to fellow actors and rock stars over the years but she’s never been married. She says that marriage is not the most important thing in her life. Patricia Kaas is one of the most internationally successful French singers. She shared that she spent most of her time singing and she is familiar with loneliness. She wants to be in a relationship with a man who can love her inside. In 2005, The Nurse Jackie star decided to adopt her first child after settling into single life. She said that marriage s not a priority in her life. Despite being engaged three times, Sheryl Crow has never been married. She decided to be a single mom when adopting two children, Levi in 2010 and Wyatt in 2007. She said having children made her rethink what’s important in her life.