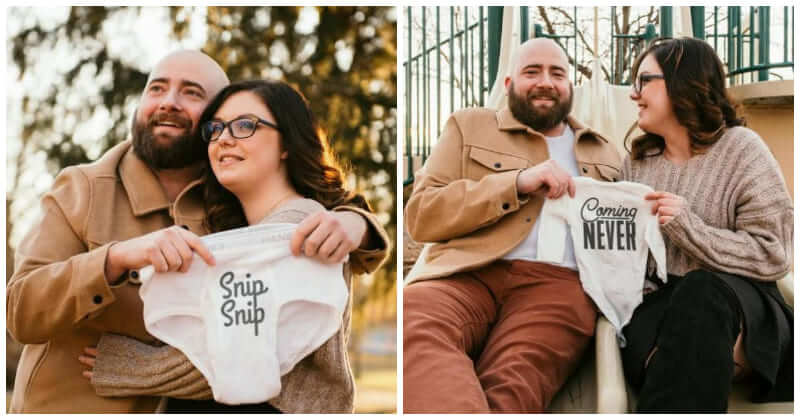 What do you think of the childfree life? We are living in a society where we have control over the path we take and the choice we make – including whether or not to have children. More and more adults today are choosing to opt out of being parents. Some women gave the reason for this, “Because I cherish my freedom.” They also shared, “Every day I don’t buy diapers, I’m sticking it to the man. And I have the time to think, to be creative, and to cultivate a career.”

And this couple can be seen as a living proof of childfree life. Despite the fact that the pair have been together for four years, and have known for quite a while that parenthood wasn’t for them. Recently, they came up with an idea of taking a fun photoshoot about their childfree life and then sharing it on Facebook. The post immediately blew up and received many opinions from the online community.

We’re Having A Baby Many people aspire to be parents at some point in their lives, whether they are married or single. It’s a life-altering decision, and people can’t wait to spread the news when the time comes.

Parents can inform friends and relatives about their pregnancy through a variety of methods, including word of mouth or a gender reveal party. Expensive pregnancy photoshoots are also popular. However, not everyone is sold on the idea of having children or even getting married when it comes to family planning. After all, everyone has their own idea of what their “ideal” existence should entail.

A sociology professor at the University of Maine studied why people are choosing not to have kids. Data in her study shows US women in their early 40s – not having children – was twice the amount now than it was 40 years ago. “I see a lot of couples and individuals that come in,” said Andra Williams, Licensed Professional Counselor, Northern Michigan. According to the National Survey of Family Growth, roughly 15% of US women and 24% of men have no children by the time they reach 40. Williams said, “There are some that come in and they just don’t like kids and that’s OK.” And “They don’t want to have children because they don’t feel like they have the time that they can give to their children if they have them,” said Williams.

When one couple sought to share their child-free life with the rest of the world, they pulled a page from the maternity photoshoot playbook. Tyler Frederick and Chelsea Roy are a couple living in Indiana. The couple has been together for four years and has known for a long time that they aren’t ready to start parenthood. In light of this, they staged a fun photoshoot and uploaded the photographs on Facebook, where they have now gone viral.

“We have a very exciting announcement to make!” Tyler stated in his post.

We’re (Not) Having A Baby The couple decided to stage a photoshoot celebrating Tyler’s vasectomy. The photograph, which included a baby onesie that says “Coming never,” men’s underwear that says “Snip-Snip,” and even a pretend set of kid scissors, is gaining attention on social media.

“We are expecting… NEVER! Got snipped mid-December and looking forward to the child-free life,” Tyler writes.

What Is a Vasectomy Anyways? Perhaps you or someone you know has undergone the surgery before, or you’ve simply heard about it. What exactly is a vasectomy?

A vasectomy is a simple surgical operation in which the tubes responsible for delivering sperm are cut and subsequently sealed, lowering the possibility of becoming pregnant during sexual activity. The treatment is long-lasting and virtually 100% successful.

How Did The Idea Get Started? Tyler says he came up with the concept for the vasectomy photoshoot in an interview with TODAY Parents. He confesses that he was unsure at first about the plan, but that he ended up having a great time.

Tyler ended up enlisting the help of his close friend and professional photographer, Elijah VanDine, to lead the session, stating that this was his friend’s first time doing so.

Just The Two Of Us Tyler and Chelsea also state that they have no desire to have children. Friends and family of the couple say they’ve always been open about their feelings about having children and that they’ve never been pressured to raise a family.

The pair has friends who are parents, whom Tyler refers to as “rockstars,” but Tyler claims he isn’t made out for parenthood. Family and friends have been supportive and amusing about the vasectomy photoshoot. The response has been generally positive on social media, and while there have been a few naysayers, Tyler believes “it’s to be anticipated.” People who choose to be child-free are more popular than ever before, although their decision is sometimes faced with opposition.

Despite the fact that Tyler and Chelsea had no goal of doing so, the photoshoot has helped normalize individuals and couples who choose to be childless, and they are pleased to hear that their photoshoot has made more people feel accepted. Because this child-free choice is becoming increasingly widespread, Tyler advises that people wait to share the news with relatives and friends before bombarding them with personal questions.

“If these pictures make things any easier for someone pressured into having kids, or helps normalize this choice, then I’m happy to have helped others even just a little,” Tyler says.

25 Tweets That Show How Stupid Kids Are

20 Times When Wannabe Influencers Try Hard To Get Free Stuff

Feel The Pure Satisfaction Brought About By These Amazingly Useful Designs

The Funniest Conversations People Have Overheard In Los Angeles

20 Deceptive Packaging Designs That Will Drive You Mad

These 27 People Deserve A Refund More Than Anyone Else

12+ Brilliant Designs That Can Take All Of Our Money

If There Is An Award For Yearbook Quotes, It Will Be Given To These Humorous Students