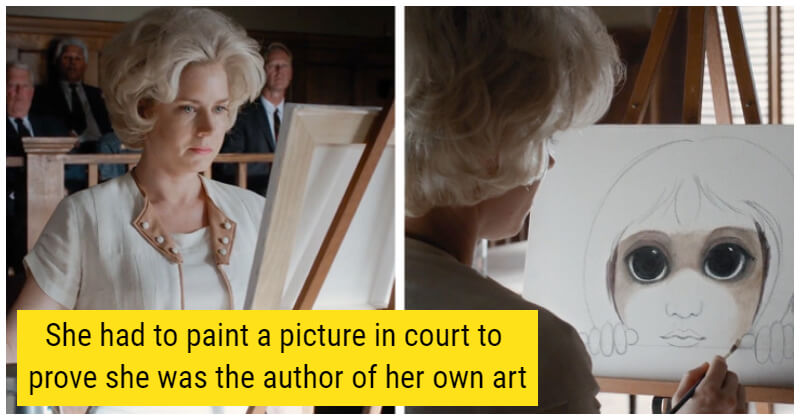 Big Eyes is a weird biopic in the sense that it has a strange fantastical feel to its ambiance.

This is pretty obvious when you think about, Tim Burton being behind the movie. Tim Burton’s phantasmagorical images amplify the creepiness of the big eyes portraits.

Based on the real-life story of American artist Margaret Keane and how her second husband, Walter Keane, steal credits for her work. Margaret is phenomenally famous for her paintings of people with big eyes. Hence the title.

The movie won multiple awards, is critically acclaimed, and is a box office success, earning twice its budget. Which is rare for the genre.

But what is the real-life inspiration for the movie? Sit down with us for a detailed recap of the biggest tragedy of one of America’s most influential artists of her time, Margaret Keane. Early in her career, Margaret Keane enjoyed experimenting with the “kitsch” style, sometimes referred to as “hackneyed.” She painted with anything, from acrylic colors to oils. Inspired by the way painters such as Vincent van Gogh, Pablo Picasso, and Amedeo Modigliani depicted women in their works.

Her paintings generally depicted children or animals with large eyes and sad faces. This gives her a distinguished style from other popular artists of the period. Margaret had divorced her previous husband and relocated to San Francisco, California, during this period.

#2 Her second marriage to Walter Keane She met Walter Keane, her second husband, shortly after coming to San Francisco with her daughter. Due to her influence, Walter switched from real estate to painting.

Their marriage, however, was not so amicable. Walter was highly jealous and controlling, and Margaret was often forced to paint even when she did not want to. No matter what, Walter always made certain that Margaret continued to paint without interference as he worked. She had little recognition for her efforts at this time.

#3 Her husband’s marketing and subsequent success Walter was a brilliant art marketer; he helped Margaret’s paintings achieve great fame and sell for millions of dollars. In the 1960s, her artworks were so well-known that they were dubbed “Keane eyes” or “big-eyed waifs.”

Walter stated that the orphans he encountered on his travels motivated him. Margaret’s work was quickly incorporated and mass-produced into designs. Although the public was fascinated by the unusual and emotional paintings, they received harsh reactions from experts.

What Margaret didn’t realize, but would later discover, was that her husband was stealing credits for her work, resulting in years of court fights.

#4 Her discovery of the ruse Margaret couldn’t do anything; she didn’t even realize she wasn’t credited for her own work. Until she went to the club where her paintings were sold, she realized what was going on. Customers would not buy paintings from a divorced woman, according to Walter.

Their marriage ended after ten years. Margaret uncovered Walter’s deception during a radio appearance in the 1970s. Walter released a statement in the 1980s alleging that his ex-wife was lying, and she sued him for defamation.

#5 Her proving she was the author of her own art. The trial began in 1986, and the court once invited the two sides to paint a portrait in front of everyone present. The goal was to ascertain the real authorship of the works. Walter declined, citing a bad shoulder, however, Margaret accepted the challenge.

In less than an hour, she showed everyone who was following the case a painting that corroborated her claim ten years before. Margaret won the claim and the $4 million in compensation.

However, because Walter had squandered the whole fortune, she was unable to retrieve any of the money she had acquired from her own efforts during the years-long hoax. He, for his part, maintained that he was the genuine author of the paintings until his death in the 2000s.

#6 In 2014, the world learned the story thanks to a film released The film was nominated for two BAFTA Awards and another Critics Choice Award for Best Music. Amy Adams’ performance earned her a Capri Actress Award and a Golden Globe.

When questioned about the film, Margaret replied that it was quite true in describing what happened in real life, and she thought it was fantastic.

#7 The differences between fiction and reality Big Eyes helped Margaret Keane receive the acclaim she deserved for her extensive body of work.

Of course, the movie dramatized the truth in various ways. In the film, Walter never attempted to paint the sold paintings. In reality, he did, but he was unsuccessful.

Another was that no one visited the couple’s mansion in the film. The real Walter loved to entertain local high society and even celebrities at his home. They couldn’t get inside Margaret’s studio, where she painted for roughly 16 hours a day. As a result, she was never seen.

#8 The change in her art and life today Margaret now resides in Napa, California, where she continues to make lovely and successful pieces of art. Her work, which rose to fame with the publication of the feature film based on her life story, is available for purchase at Keane Eyes Gallery in San Francisco.