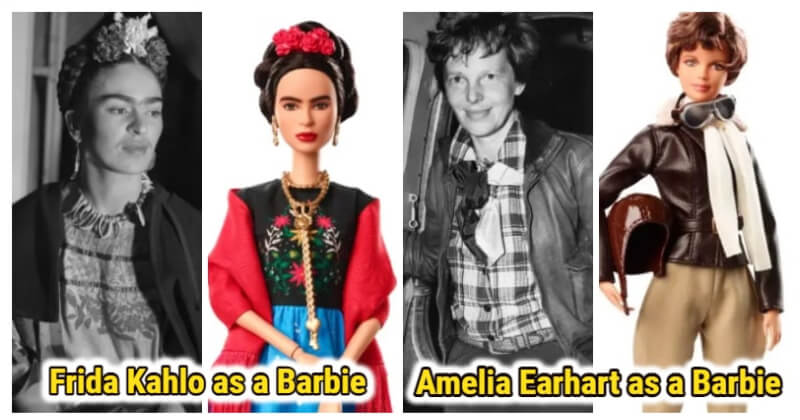 Barbie dolls have remained one of the most popular toys of all time. For many people, they are part of childhood and with time, many of them have been created beyond our imagination. Manufacturers and designers have made dolls that are perfect replicas of celebs and most of them look like real ones.

For example, Tonner Doll, a collectible doll design and distribution company created a series of Twilight dolls. They made dolls in the likeness of Bella Swan and Edward Cullen in the movie, played by Kristen Stewart and Robert Pattinson. Fans of Twilight felt excited about seeing their favorite characters “come to life”.

Scrolling down to see 29 barbie dolls that were modeled after inspiring famous people.

#1 Laverne Cox as a Barbie Laverne Cox rose to prominence with her role as Sophia Burset on the Netflix series Orange Is the New Black. She became a transgender person to be nominated for a Primetime Emmy Award in an acting category. Ida B. Wells-Barnett was a prominent journalist, activist, and researcher, in the late 19th and early 20th centuries. She led an anti-lynching crusade in the United States in the 1890s. She later was active in promoting justice for African Americans.

#3 The five dolls Mattel has released to commemorate frontline workers Professor Sarah Gilbert and her team created the “Oxford vaccine”, a front runner in the race for a coronavirus vaccine. They published results showing that the vaccine produces the desired immune responses in people.

#4 Samantha Cristoforetti as a Barbie Samantha Cristoforetti is an Italian European Space Agency astronaut and also the first Italian woman in space. She had held the record for the longest uninterrupted spaceflight by a European astronaut before this was broken by Peggy Whitson and later by Christina Koch.

#5 Naomi Osaka as a Barbie Naomi Osaka became the world’s No. 1 ranked player in women’s tennis following her Grand Slam wins at the 2018 U.S. Open and the 2019 Australian Open. She was the first Asian female player to reach this top ranking.

#6 Gabby Douglas as a Barbie Gabrielle Douglas is a US Women’s Artistic gymnast. She is the first African-American gymnast in Olympic history to become the Individual All-Around Champion.

#7 Maya Angelou as a Barbie Maya Angelou is an American author, poet and civil rights activist. She was best known for her unique and pioneering autobiographical writing style. She published seven autobiographies, three books of essays, several books of poetry and received dozens of awards.

#8 Abby Wambach as a Barbie Abby Wambach was considered a soccer icon when winning two Olympic gold medals (2004 and 2012) and a World Cup (2015). She was also the world’s top goal scorer across men’s and women’s soccer in 2015.

#9 Ibtihaj Muhammad as a Barbie Ibtihaj Muhammad is widely known for being the first American Muslim woman to wear a hijab while competing at the Olympic Games. At the 2016 summer Olympics in Rio, she won a team bronze medal.

#10 Tessa Virtue as a Barbie At Pyeong Chang 2018, Tessa Virtue and her partner, Scott Moir became the most decorated figure skaters in Olymic history. They won golf medals in both the ice dance and team events.

#11 Katherine Johnson as a Barbie Katherine Johnson had a passion for math. Early in her career, she was called a “computer.” She helped NASA put an astronaut into orbit around Earth and then a man on the Moon. Sally Ride flew in the space shuttle Challenger in 1983 and became the first American woman to go into space. She was one of six women selected to enter the astronaut corps in 1978.

#13 Amelia Earhart as a Barbie Pioneering piloAmelia Earhart became the first woman ever to fly solo nonstop across the Atlantic Ocean. In 1932, she touched down in Londonderry, Northern Ireland after a 15-hour transatlantic flight that started in Newfoundland, off the coast of Canada. Rosa Parks was called “the mother of the civil rights movement” when she refused to give up her seat to a white man on a Montgomery, Alabama bus in 1955. Her actions inspired the leaders of the local Black community to organize the Montgomery Bus Boycott.

#15 Ava Duvernay as a Barbie Ava DuVernay was known as a writer, director, and producer. She was the first African American woman to win Best Director at the Sundance Film Festival. Her work has made her the highest-grossing Black woman director in American box office history.

#16 Misty Copeland poses with her Barbie #17 Frida Kahlo as a Barbie Frida Kahlo is one of Mexico’s greatest artists. The Mexican artist is known for her colored self-portraits, and works inspired by the nature and artifacts of Mexico.

#18 Yara Shahidi as a Barbie The American actress Yara Shahidi gained recognition for her role as the Zoey Johnson on the sitcom Grown-ish. In 2016, she signed to model with New York’s Women Management modeling agency and she shared that she hoped to see more women of color in dicerse roles. Savannah Guthrie and Hoda Kotb made history as being the first pair of women to co-anchor. They have both spent years working together but now they are apart.

#20 Zendaya with her Barbie Zendaya started acting as a child and first came to fame in 2010 with the comedy “Shake it Up”. She went on to star in big-budget films like “Spider man: Homecoming” and “The Greatest Showman”. Cher is one of the world’s most popular singers and actresses, with a career spanning seven decases. As a singer, she is the only performer to have eared “Top 20” hit singles in four decades and as an actress, she also won Best Actress Oscar. Heidi Klum is a German supermodel turned television personality known for her appearances on popular TV shows like ‘Project Runway’ and ‘America’s Got Talent.

#23 Ashley Graham as a Barbie Ashley became a world famous supermodel and appeared in many collections and catwalk shows. In 2016, she became the first plus-size model to appear on the cover of the Sports Illustrated Swimsuit Issue.

#24 Emmy Rossum as a Barbie Emmy Rossum is best known for portraying the role of ‘Fiona Gallagher’ in the comedy-drama series Shameless. Over the years, she has acted in numerous films, including “Songcatcher”, “An American Rhapsody”, “Passionada” and so on.

#25 Grace Kelly as a Barbie Grace Kelly rose to fame as a leading Hollywood actress following her prominent role in High Noon. After getting married with Prince Rainier, she retired from acting.

#26 Jennifer Lopez as a Barbie Jennifer Lopez is one of Hollywood’s leading ladies who’s also forged a successful pop and dance music career. In 2004, she married Marc Anthony and had twins. The couple split a few years later.

#27 Kristin Chenoweth as a Barbie Kristen Chenoweth is the talented actress when winning a Tony award for her performance as Sally Brown in “You’re A Good Man”. In 2009, she earned an Emmy for her role in “Pushing Daisies”.

#28 Ree Drummond as a Barbie Ree Drummond is best known for her blog “The Pioneer Woman”. It has been awarded with the Weblog of the Year awards in 2009 and 2010. Most of her blogs, she writes about her daily life at the ranch as a mother and a wife.

#29 Trisha Yearwood as a Barbie Trisha Yearwood rose to fame with her1991 debut single “She’s in Love with the Boy”, which became No.1 hit on the Billboard country singles chart. During the early to mid-1990s, she continued with a series of major country hits.