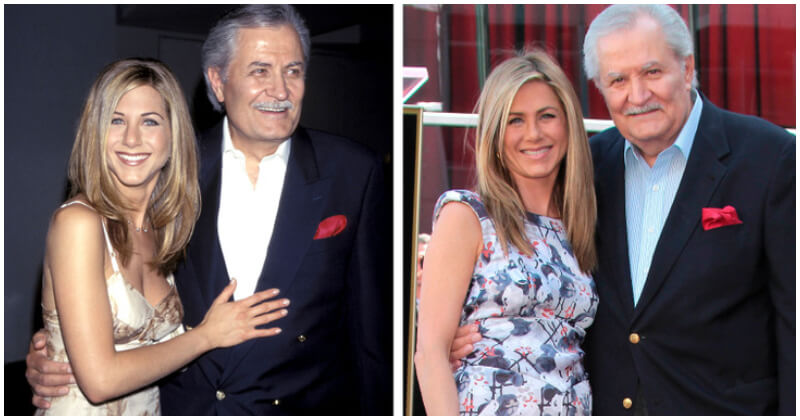 Dads have always been there for us, picking us up when we fall down and advising us on everything from career choices to personal finances. They can be our closest friends, mentors, and biggest cheerleaders in our life. So it’s great to have dads by your side during important moments.

The same is true for some Hollywood celebrities. All of them understand the happiest thing is to have their father’s companion during their special events. Take actress Jennifer Aniston as an example. On Feb. 22, 2012, she received the 2,462nd star on the Hollywood Walk of Fame. And on that important day, she invited her father – actor John Aniston – as a companion. And recently, at the 2020 Grammy Awards, Camila Cabello appeared gorgeously next to her father Alejandro Cabello while walking on the red carpet. Then, when the singer took the stage, she dedicated the song “First Man” to her father, Alejandro, who cried in the audience.

Scroll down to see more of the sweetest photos of the stars and their father on the red carpet!

#1 Camila Cabello and Alejandro Cabello at the Grammy Awards, 2020 The pop star was nominated for a Grammy for best pop duo/group performance for her Shawn Mendes duet “Señorita” which topped the Hot 100. When the singer dedicated “First Man” to her father, Alejandro, who was her date on the awards night. Cabello walked off the stage at the end of the song and sang “Havana”, she went to clasp her weeping father’s hands as she ended the ballad. In 2020, the father-daughter duo attended the Vanity Fair Oscar Party at the Wallis Annenberg Center for the Performing Arts in Beverly Hills, California. Bryce donned a black Elie Saab blouse and skirt with a plunging neckline and lace sleeves. And her father was classic in a black tuxedo, white shirt, and black tie. Bryce and her father have always been close, so much so that Bryce told PEOPLE TV that she and her husband Seth Gabel based their parenting approach on Ron’s.

#3 Gina Rodriguez and Genaro Rodriguez at the Golden Globe Awards, 2016 Gina Rodriguez attended the 2016 Golden Globes with a special guest: her father, Genaro “Gino” Rodriguez. Gina has been nominated for a Golden Globe for her title role on the CW’s Jane the Virgin, which she won in 2015. Gina thanked her parents for encouraging her to “dream big and never stop dreaming” during her memorable and tearful Golden Globes victory speech last year (2015). Micheal Fassbender attended the 2016 Academy Awards with his father Joseph. The father and kid looked fantastic in identical suits with swanky bow ties on the carpet. For his work as Steve Jobs, the actor received a Lead Actor nomination. This is his second Oscar nomination. He was previously nominated for “12 Years a Slave” for Actor in a Supporting Role. #6 Dwayne Johnson and father Rocky Johnson at an event, 2015 Dwayne Douglas Johnson, aka The Rock, is an actor, businessman, and former professional wrestler from the United States. He wrestled for WWE for eight years before pursuing an acting career. He is widely considered one of the best professional wrestlers of all time. His films have grossed over $3.5 billion in North America and $10.5 billion globally, making him one of the highest-grossing and highest-paid performers in the world. In 2015, he joined an event with his father Rocky Johnson.

#7 Zendaya and Kazembe Ajamu Coleman at the iHeartRadio Music Awards, 2015 Zendaya is a singer and actress from the United States. Zendaya began her career as a child model and backup dancer in Oakland, California. She rose to fame as Rocky Blue on the Disney Channel sitcom Shake It Up (2010–2013) and competed in the 16th season of Dancing with the Stars. She created and starred in the Disney Channel sitcom K.C. Undercover (2015–2018). Zendaya was the youngest recipient of the Primetime Emmy Award for Outstanding Lead Actress in a Drama Series for her portrayal as Rue Bennett in the HBO teen drama series Euphoria (2019–present). She walked the red carpet with her father, Kazembe Ajamu Coleman at the iHeartRadio Music Awards 2015. Adrien Brody rose to prominence after playing Wadysaw Szpilman in Roman Polanski’s The Pianist (2002), for which he won the Academy Award for Best Actor at the age of 29, making him the youngest actor to do so. After Christopher Lambert, Brody is the second male American actor to win the César Award for Best Actor. In 2014, Adrien Brody attended a gala with his father Elliot Brody. Miley Cyrus wore a white suit with short hair and looked very personal when she attended the 2013 American Music Awards. Appearing on the red carpet with Miley was her father, Billy Ray. The father and son attract everyone’s special attention because of their breakthrough, while Miley Cyrus looks masculine, her father looks very “cool” with long hair like a genuine rocker. Jennifer made her cinematic debut in the drama “Garden Party” (2008) as a supporting character, and her breakthrough role as a poor adolescent in the indie mystery thriller “Winter’s Bone” (2009). (2010). Lawrence’s career progressed with leading roles in the “X-Men” film series (2011–2019) and “The Hunger Games” film series (2012–2015). She became the highest-grossing action heroine of all time thanks to the latter. In 2012, Jennifer Lawrence attended a movie premier with her father Gary Lawrence.

#11 Jennifer Aniston and John Aniston at The Hollywood Walk of Fame, 2012 At a premier film in 2012, singer Katy Perry invited her father Keith Hudson to join with her. In their flashy outfits, the father-son duo really stood out that day. As a daughter of actor Ernie Lively, Blake Lively made her professional debut in her father’s film “Sandman” (1998). She became famous for her performance of Serena van der Woodsen in the CW teen drama television series “Gossip Girl” (2007–2012). She and her father at a red carpet event, 2009. Saoirse Ronan was shot to international fame by her role in the English war romance “Atonement”. And for which, she received an Oscar nomination in 2008 for her best-supporting actress role. For this day, she invited her dad, Paul Ronan to come with her. Matt Damon has received numerous awards and nominations, including an Academy Award and two Golden Globe Awards, as well as three British Academy Film Awards, six Screen Actors Guild Awards, and seven Primetime Emmy Awards. He shared a photo of him and her father, Kent Damon at a movie premier in 2007. Thurman shot to international fame as Mia Wallace in “Quentin Tarantino’s Pulp Fiction” (1994), for which she received Academy Award, BAFTA Award, and Golden Globe Award nominations for Best Supporting Actress. She was hailed as Tarantino’s muse, and she reunited with him to play The Bride in “Kill Bill: Volumes 1 and 2” (2003 and 2004), earning her two more Golden Globe nods. At a red carpet event in 2006, she appeared beside her father Robert Thurman.

#17 Ryan Reynolds with James Reynolds at a movie premiere, 2005 He has garnered numerous awards and nominations throughout his 30-year career in cinema and television, including a Critics’ Choice Movie Award, three People’s Choice Awards, a Grammy and Golden Globe nomination, and a star on the Hollywood Walk of Fame. The superhero flicks “Deadpool” (2016) and “Deadpool 2 (2018), in which he played the title character, were Reynolds’ biggest commercial successes. The former shattered multiple records for an R-rated comedy at the time of its release, and his performance earned him accolades for Critics’ Choice Movie Awards and Golden Globe Awards. In 2005, Ryan Reynolds and James Reynolds attended a movie premiere.

#18 Anne Hathaway and Gerald Hathaway at a red carpet event, 2005 Hathaway went on to star in the box office hits “Bride Wars,” “Valentine’s Day,” and “Love & Other Drugs,” as well as the fantasy feature “Alice in Wonderland” (2010). Anne Hathaway and her father, Gerald Hathaway at a red carpet event in 2005.

#19 Ashton Kutcher with Larry Kutcher at a movie premiere, 2003 Following the 73rd Academy Awards in 2001, Jolie and her father Jon Voight attended the Vanity Fair Oscar Party together. The actress ceased speaking to Voight later that year, and the two did not reunite until 2009.

#21 Gwyneth Paltrow and Bruce Paltrow at a red carpet event, 1999 Paltrow rose to prominence with films including “Seven” (1995), “Emma” (1996), “Sliding Doors” (1998), and “A Perfect Murder” (1999). (1998). Her performance as Viola de Lesseps in the romantic historical fiction film “Shakespeare in Love” (1998) earned her recognition and multiple prizes, including the Academy Award for Best Actress. In 1999, Gwyneth Paltrow attended a red carpet event with her father Bruce Paltrow. As the daughter of actors Bruce Dern and Diane Ladd, Laura Dern began her acting career in the 1980s. She was nominated for an Academy Award for her performance in the drama film “Rambling Rose” (1991), and for her part as Ellie Sattler in Steven Spielberg’s adventure films “Jurassic Park” (1993 and 2001), as well as the upcoming “Jurassic World Dominion” (2022). This is a photo of Laura Dern with her father, Bruce Dern, at the 2014 Golden Globe Awards. Winslet appeared in James Cameron’s “Titanic” (1997), which was the highest-grossing picture of all time at the time. And for her portray of Rose, Kate won an BAFTA Awards. In the BAFTA Awards 1997, Kate Winslet invited her father Roger Winslet to join with her.

5 Different Ways Celebrities React To Slap Of Will Smith