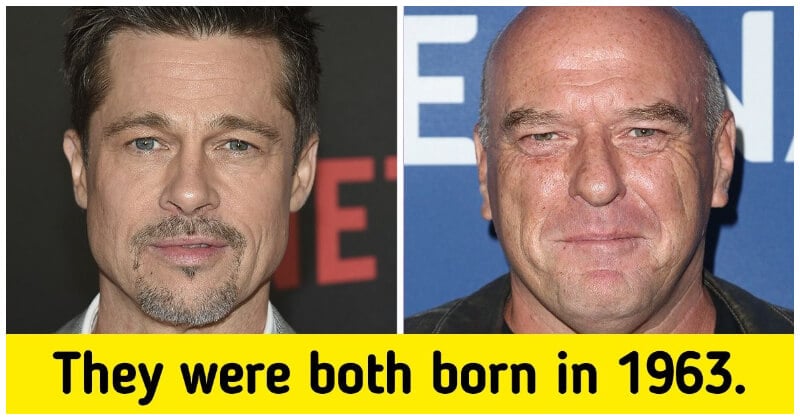 When we see our favorite celebs in the movie, it’s hard to guess who are the same age. Some celebrities look considerably older than their real age, while others appear to be much younger than they really are.

Take Brad Pitt and Dean Norris as an example. In 2013, both actors appeared in the movie “The Counselor”- a crime thriller film about the Mexican drug trade. In the movie, Brad Pitt played Westray, a young, attractive man with a cowboy hat and Dean Norris portrayed a messy man – the Buyer. When watching this movie, viewers can notice a big difference in appearance between the two actors. While Brad Pitt still maintains his toned body and attractive face, Dean Norris looks much older. Therefore, many people thought Dean Norris is a few years older than Brad Pitt despite the fact that they were both born in 1963.

This isn’t the only celebrity duos that make it hard to believe they’re the same age. So, who are they? Scroll down to see. Who surprised you the most? Let us know in the comments below! Brad is one of the most famous Hollywood actors and for many years, he has been voted as one of the sexiest men on the planet. Meanwhile, Dean is a B-list actor but has won the hearts of the audience through the hit TV series “Breaking Bad” as the main character’s brother. Many fans were surprised to know that these two actors were born in 1963. Jolie now is one of the most powerful and influential persons in the American entertainment industry. Although she is 47 years old, various media sites have referred to her as the most beautiful lady on the planet.

Khaled rose to fame as a radio presenter on the station 99 Jamz in the 1990s and then used his celebrity to act as a DJ for Terror Squad’s live concerts. At the age of 47, Khaled achieved a lot of success including triple-platinum sales and a Grammy nomination for Best Rap Album. Melissa Ann McCarthy has received multiple awards and nominations, including two Primetime Emmys and nominations for two Academy Awards and two Golden Globe Awards. McCarthy was named one of the 100 most influential people in the world in 2016 and she has been in the list of the world’s highest-paid actresses several times.

Naomi Elaine Campbell is a model, actress, singer, and entrepreneur from the United Kingdom. She began her modeling career at the age of 15 and has since become one of the most well-known and sought-after models of the last four decades. Campbell was one of six models from her generation who were dubbed “supermodels” by the fashion industry and the press. Benedict Cumberbatch is a familiar face to many Marvel fans with his iconic role as Doctor Strange. And recently, “Doctor Strange in the Multiverse of Madness” just aired and helped the 46-year-old actor attract more fans. And actress and producer Reese Witherspoon who is the same age as Benedict, is also one of the most famous celebrities in Hollywood. She won various accolades, including an Academy Award, a British Academy Film Award, a Primetime Emmy Award, and two Golden Globe Awards. The Weeknd is one of the most famous and successful singers in Hollywood. He has won many outstanding achievements such as four Grammy Awards, 19 Billboard Music Awards, 15 Juno Awards, six American Music Awards, two MTV Video Music Awards, and an Academy Award nomination. And Thomas Brodie-Sangster is an English actor who played in many famous movies such as “Love Actually” (2003), “Ferb in Phineas and Ferb” (2007–2015), “Game of Thrones” (2013–2014), “The Queen’s Gambit” (2020). Both were born in 1990, but actor Thomas looks completely younger than The Weeknd. Victoria Beckham rose to fame in the 1990s as a member of the Spice Girls, where she earned the nickname Posh Spice. Beckham was contracted to Virgin Records after the Spice Girls split in 2001, and released her self-titled debut solo album, which yielded two UK Top 10 songs. Dmitri “Misha” Collins, meanwhile, is an American actor, novelist, producer, and director best known for his portrayal of Castiel on the CW television series Supernatural (2008–2020). It’s surprising to know that the two of them were born in 1974. Meghan Markle is a former actress and a member of the British royal family. After marrying Prince Harry in 2018, she quited performing and became known as the Duchess of Sussex.

Elijah Jordan Wood is an actor and producer from the United States. He is most known for playing Frodo Baggins in the “Lord of the Rings” film trilogy (2001–2003) and “The Hobbit: An Unexpected Journey” (2012). Actress Rachel Anne McAdams was born on November 17, 1978. She has joined many famous films and her most famous movie was “Doctor Strange” (2016) and its 2022 sequel.

James Corden is an actor, comedian, singer, writer, producer, and television personality from England. He is best known as the host of “The Late Late Show with James Corden”, a CBS late-night discussion show that has aired since 2015. In addition, he is co-writing and acting in Gavin & Stacey, a highly acclaimed BBC sitcom. Today, he is 44 years old. Did you know that Ant-man Paul Rudd is 53 years old this year? We don’t see any signs of age on his face at all. However, signs of age are clearly visible on the face of actor Ken Jeong- who is the same age as Paul Rudd. Nicole Kidman is a well-known actress who has worked in various genres and has consistently remained one of the highest-paid actresses in the world. She and “Friends”‘s star Matt LeBlanc are the same age. It’s hard to believe because Matt LeBlanc looks much more mature than the actress. Queen Latifah is a rapper, actor, and singer from the United States. Latifah has won a Grammy Award, an Emmy Award, a Golden Globe Award, three Screen Actors Guild Awards, two NAACP Image Awards, and an Academy Award nomination for her work in music, cinema, and television. And Uma Thurman is an American actress, producer, and model who has received Academy Award, BAFTA Award, and Golden Globe Award nominations for Best Supporting Actress. Both women were born in 1970. Smith has garnered several awards for his efforts in music, television, and cinema. He is one of the few black people nominated for the four major American entertainment awards: Emmy, Grammy, Oscar, and Tony (EGOT). Smith has set and held multiple box office records in the United States and abroad. Though Smith still looks like a 30s-something, he’s actually turning 54 this year, the same age as actress Lucy Liu. Actress Michelle Gellar is known for her leading role in the teen drama series “Swans Crossing” (1992). Today, even though she is 45 years old, she is still very young and beautiful!

Kanye West is a rapper, record producer, entrepreneur, and fashion designer who was born in 1977. He is widely recognized as one of the greatest and most influential hip-hop musicians of all time, as well as one of his generation’s greatest musicians. Halle Berry took on high-profile roles as Storm in four installments of the X-Men film series (2000–2014). This year, she is 56 years old but she looks like she’s only 30! Meanwhile, actor and producer Jeffrey Dean Morgan who has the same year of birth as her looks much older. Although Lizzo is only 8 months older than Vanessa, (Lizzo was born on December 14, and Vanes was born on April 27), Lizzo looks much more mature. Both are famous singers in Hollywood and were born in 1988. However, in addition to her singing career, Vanessa is also successful in her acting career.