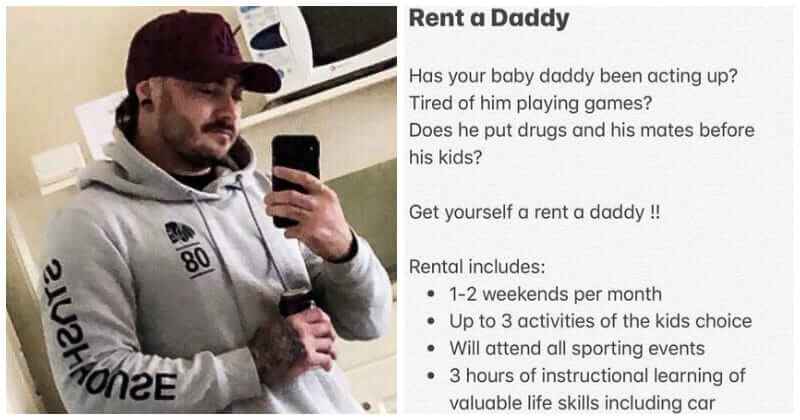 Raising a kid is hard. And if you’re doing it alone, it can seem EXHAUSTING. Some single moms and dads indicate that they seemingly have superpowers because they are twice as strong, twice as patient, twice as resilient, and twice as caring. We can’t deny that being a single parent is also extremely time-consuming. As a result, more often than not, they need support from someone who can share the responsibility.

Jake James from New South Wales, Australia seized the opportunity and came up with an interesting idea of offering a service for single moms to rent a partner for a day. He posted on his Facebook account to introduce his ‘Rent A Daddy’ service. And his post immediately went viral and received a lot of attention from some moms. Scroll down to take a look at what people have to say about his idea. James came up with a pretty interesting idea that may help him have an additional source of income while also helping single mothers. Jake, a truck driver, expressed his desire to “get a break” from his work and made a decision to run a side business on Facebook in March of 2020. Jake James of Blue Haven, Australia got an idea to post an ad for him as a rentable dad on his Facebook This includes instructional learning, attending sports events, partaking in the kid’s desired activities and much more Services include pretty much everything you’d expect from a babysitter, but with a more fatherly approach: 3 hours of instructional learning of vital life skills such as car maintenance and lawn mowing, daycare and school drop-offs and pick-ups, 3 activities of the child’s choosing, attending athletic events, and the prospect of getting him on weekends.

Jake will be your family’s hunky stand-in baby daddy for $30 an hour. And of course, he will do everything dad does, including teaching your kids life lessons. His Facebook post blew up, and while most people laughed at it, some mothers were actually interested.

Jake’s daddy services are AU$30 per hour as a regular cost, with a 20% hourly extra on Sundays after 4 p.m. and Sunday night dinners (which is, of course, optional). For an extra fee, Jake may also attend family gatherings, birthday parties, and Sunday afternoons. His Facebook relationship status and family selfies are among the other things he offers.

People couldn’t help but laugh. And here’s what people had to say about his bussiness

If You Know What These Technology Items Are, You’re Already Old

Moments When People Realized That Adopting Cats Was A Mistake

20 Questionable Signs That Made People So Confused, They Just Had To Share Them Online

15 Cringy Stock Photos That Should Have Never Been Printed

The Most Ridiculous Ways Of Serving Food In Restaurants

25 Times People Thought They Could Trick Someone, But They Won The ‘Didn’t Happen Of The Year Awards’ Instead

25 People Who Got Caught Sleeping With Hilarious and Weird Positions

Old Age Test: If You Know Any Of These Things, You’re Old