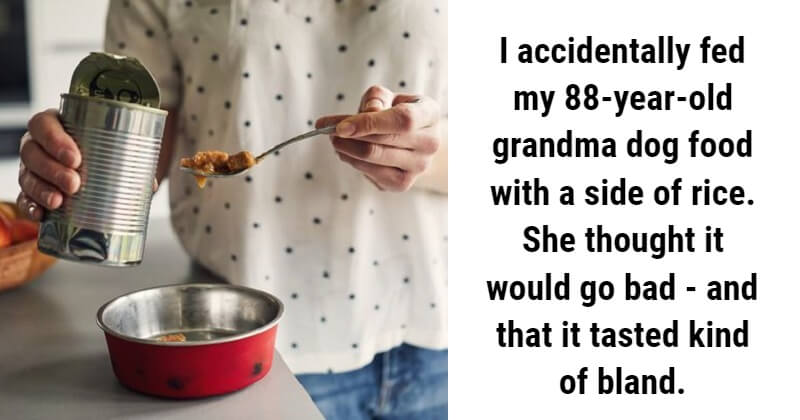 A woman confessed that she accidentally fed her 88-year-old grandma dog food after she mistook it for frozen minced meat. She then went on Reddit to admit her truth and ask for advice.

She shared that she and her sister stayed at their auntie’s house for a few days. The sister didn’t want to cart raw dog food back to her own house, so she had sealed up it to leave in her auntie’s fridge and told her to use it up on her own dog. She didn’t think anymore about it until her grandma used it to cook a meal for two.

The next time they went to visit their auntie, they figured out what had happened.

Nobody knew whether the woman and her sister told the truth to their grandma and auntie – or whether it has become a family secret. However, they have been comforted and advised by Redditors who have had the similar situation to them.

“I ate puppy treats and role played as a dog when I was a kid,” one user confessed.

While another user admitted: “My grandfather-in-law actually ate dog snacks. We found him in the kitchen eating some and we told him what it was and he thought they were good anyway. I can’t imagine, I figured they’d be too salty.”

What do you think about this situation? Please tell us your thoughts in the comments below!

Man Wants To Drown Puppies He No Longer Wants, But Woman And Mom Dog Gives Them Real Family

Meet Ayam Cemani, An Exotic Chicken Breed of Indonesia That Is Black From Inside Out