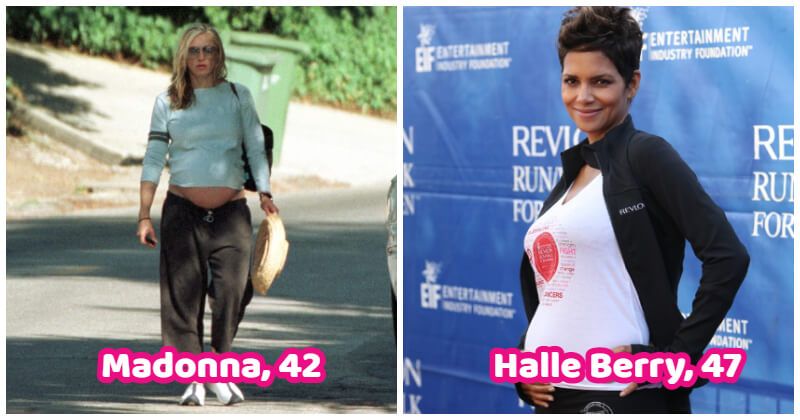 For women, being a mom is the greatest gift of life. It means that you unconditionally love a soul before you even see it. The feeling of holding a child in your arms after undergoing so much pain is unspeakable. Although being a mom is a great blessing, more and more women decide to have children later in their life. Some prioritize their career, some haven’t found the right person to start their family with.

In Hollywood, many celebs opt for giving birth after the age of 40. For example, Gretchen Rossi,  the Real Housewives of Orange County star, announced that she was expecting her first child at the age of 41 after years of infertility struggles. Or, Eva Mendes welcomed her first child, daughter Esmeralda when she was already 40 years old.

Below are 15 celebrities who broke stereotypes and proved that it’s never too late to become a mom. Australian actress Naomi Watts gave birth to two sons, Sashi and Kai at the age of 39 and 40. Sharing a lot of photos on Instagram, and she received tons of congratulations from fans. In an interview, she said that she wished she had more kids. In 2014, singer Gwen Stefani welcomed her third child, Apollo Bowie Flynn at age 44. In an interview on the Today, she called Apollo’s birth a “miracle surprise”. She shared “I never thought I would actually be in preschool again because I had him so late.” Julianne Moore’s daughter Liv was born in 2002 when the actress was 41. She was already mother to son Celeb in 1997. She said: “We have a very solid family life, and it is the most satisfying thing I have ever done”. Supermodel Christie Brinkley welcomed daughter Sailor with ex-husband Peter Cook. The actress shared that she and her husband survived several miscarriages before they got pregnant with Sailor. She said: “After the first miscarriage, I tried to take the attitude that it was my body’s way of telling me that this pregnancy wasn’t meant to be. But after the second one, it was really devastating. We decided to try in vitro because both Peter and I felt we couldn’t handle another failure.” Brooke Shields had her second daughter, Grier Hammond, with Chris Henchy when she was 41. The couple was worried about the second pregnancy because of Shields’ severe postpartum depression. She told the People: “I’d be lucky to just have the one, but with two, I realize they’ll have each other after we’re not here anymore and to me, that really settles my mind.” “I thought I was going to need help getting pregnant and I didn’t,” Salma Hayek told the WebMD after the 41-years-old actress gave birth to daughter Valentina. Despite nausea and vomiting of pregnancy, she said she wouldn’t trade the timing of her pregnancy: “I’m a more fulfilled human being now, and I probably wouldn’t have been 10 years ago. She gets a better mother for being born now.” At the age of 42, Rachel Zoe announced that she and her husband, Rodger Berman welcomed their second child Kaius. Before having Kaius, she explained that she was unsure if she would be able to get pregnant again. After multiple failed cycles of IVF, Celine Dion gave birth to twin boys, Eddy and Nelson. The Grammy-winning musician struggled for six years to conceive before enlisting the help of a fertility specialist. She told the Good Morning America: “It’s priceless. So, you know what? We had a miscarriage. We tried [IVF] three more times. It did not work. … We are trying again for the fifth try. It’s aboard right now. All aboard.” Kim Basinger, the 41-year-old actress had a daughter, Ireland, with then-husband Alec Baldwin. Due to the couple’s divorce in 2002, Basinger took a non-traditional approach to raising her daughter. She shared: “I brought up Ireland in a very unconventional way, I just wanted her to be free. If she wanted to have her friends over and write over the walls with a pen, that was fine. I wanted her childhood to be full of love and light and animals and friends.” Uma Thurman had her third child at 42, with her ex-fiancé Arpad Busson. The birth of her daughter, Altalune, came four years before the couple’s messy divorce and custody battle in 2016. The Golden Globe-winning actress found out she was pregnant with her second child, Penelope in 2011. The People reported that Fey’s attempt to have another child in her 40s was a conscious decision made by her and her husband, Jeff Richman. “My husband and I really decided that we felt rather than risk having 30 Rock end in several years and feeling like part of our family is missing that we were going to prioritize our family,” When Milano was 41, she and her husband David Bugliari welcomed their second child, daughter Elizabella. During pregnancy in her 40s, the actress said she was up for it. “I loved waiting a long time to be a mom,” she explained to Us Weekly. “I’d had my ladies’ lunches and my shopping days. The Mad About You actress was 40 when she gave birth to her daughter Makena Lei in 2003. Hunt talked about her struggles with infertility to Ladies’ Home Journal in 2008, reported by Pop Sugar: “I tried for a long time, and it just didn’t happen, to the point where getting pregnant became the greatest wish—and the greatest challenge—of my life. My fate wasn’t to jump into the backseat of a car and have a baby. My boyfriend and I were on our last big try, and if the baby hadn’t come, we would have adopted. But then I did get pregnant in 2003.” After having given birth to her first daughter Lourdes in her late 30s, Madonna had her second child, son Rocco at the age of 42. Madonna has also welcomed four adopted children into her family in addition to Lourdes and Rocco, bringing her to a total of six kids. The A-list actress Halle Berry welcomed her first child Nahla at age 41, then gave birth to her younger son when she was 47. In an interview with Ellen, Berry revealed that her second pregnancy in her late 40s was a total surprise. She said: “I was, you know, on my way…this is probably way TMI, but I was really, you know, kinda premenopausal so to have this happen was huge.”