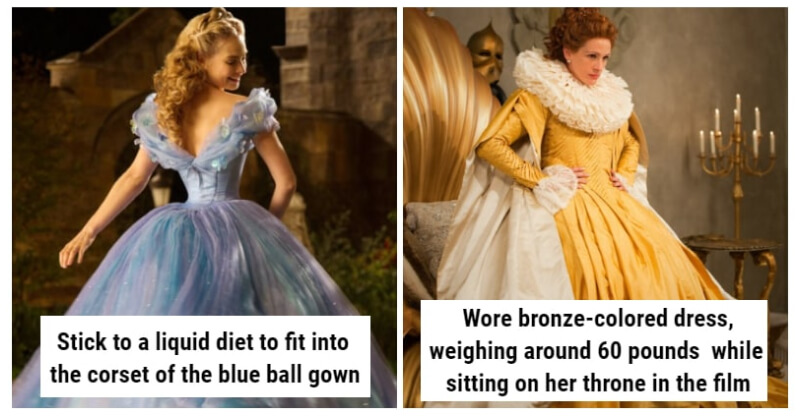 The cast is one of the important factors that contribute to the success of a movie. To help them convince their roles on screen, the film producers pay a great sum of money for gorgeous costumes, luxurious jewelry, or even finicky wigs. Particularly, historical movies require actors to wear historically accurate customs so that viewers can go back in time to feel the atmosphere of the story.

For actresses, putting on these garments is such a tough job. Some having slender bodies have to wear dresses weighing 50 or 60 pounds during filming. They also confess that they feel uncomfortable and tiresome when putting on heavy dresses for long hours.

Below are 7 actresses who shared the challenges they faced while playing in period movies. Lily James who starred in the live-action remake of Cinderella revealed in an interview that she had to stick to a liquid diet to fit into the corset of the blue ball gown. She shared: “When the corset was on we would be on continuous days so we wouldn’t stop for lunch or a lovely tea like this — you’d be sort of eating on the move. I couldn’t untie the corset. So if you ate food it didn’t really digest properly and I’d be burping all afternoon in [Richard Madden]’s face, and it was just really sort of unpleasant. I’d have soup so that I could still eat but it wouldn’t get stuck.” While playing Mary Stuart in Mary Queen of Scots, Saoirse Ronan had to wear a tight corset for about 12 hours a day. In an interview, she confessed that those corsets changed her shape and created curves she had never had before. Panniers are the type of undergarment worn by women to extend the width of their skirts. Keira Knightley shared she wore panniers or side hoops when portraying Georgiana in The Duchess. She said moving in panniers felt uncomfortable and it affected the way she interacted with other actors. Emma Corrin who played Diana in The Crown said she met a big challenge during filming. The wedding gown Emma wore in the movie was so massive and she needed the help of many people to get dressed. She said: “We were filming the scene when you first see her in the wedding dress – I think it was Lancaster House in London – and I had a team of about 10 people helping me put it on because it’s massive.” Carey Mulligan shared she felt so nervous when portraying Daisy in The Great Gatsby. She had to put on the custom attached many gorgeous diamonds. She was afraid to lose them. The actress starred as the Evil Queen in the fantasy comedy Mirro Mirror and was often weighed down by her elaborate regal dresses. One bronze-colored outfit, which she wore while sitting on her throne in the film, weighed a hefty 60 pounds and Roberts admitted she had to get ready for the shot in a specially erected tent. During an interview with Ellen, she said “I had a tent on the stage that I went in to dress because that dress doesn’t go into any modern doorway and that dress weighed, I think, 60 pounds.” The challenge that Cate Blanchett faced while playing Queen Elizabeth I was to put on the wings. She shared “In that time, people were wearing wigs because of fleas and mites. Hers are deliberately wiggy and theatrical. And they were really heavy, so it affected how much you could move. I also bleached my eyelashes and eyebrows. I quite liked it, really, that pale-redhead look,”