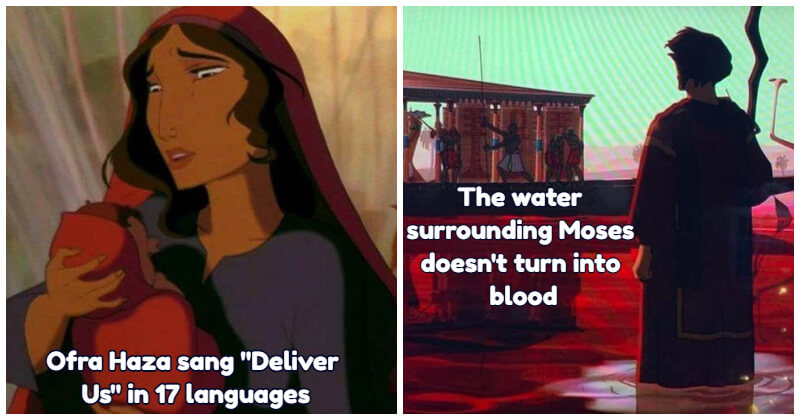 In DreamWorks’s history, “The Prince of Egypt” is considered one of the most underrated animations of all time.

The animated musical film “The Prince of Egypt” was released in 1998 and is based on the book of Exodus. The plot is changed slightly. Rameses II is a royal descendant and Moses is an orphan with a secret past. They grew up as best friends. However, the truth ultimately set them at odds, as one becomes the king of the world’s most powerful empire and the other becomes the leader of his people. Their ultimate confrontation changes their lives forever.

This is a stunning film that features an incredible storyline, astonishing visual effects, and amazing music. And the point worth noting is that the characters in this film are people of color.

But that’s not all! There are a lot of interesting facts to learn about this movie. Here’s everything you need to know about the film, from its stellar cast to behind-the-scenes details: Ofra Haza (voiced by Yocheved) sang the lullaby segment of ‘Deliver Us’ in 17 different languages. She sang phonetically in the languages she didn’t know.

#2 Moses hears God in his own voice In the burning bush scene, God is voiced by Val Kilmer, who voices Moses. So that Moses can hear God in his own voice. In the movie, a lot of Moses and Ramses’ dialogues foreshadow later events in the film! Par example, they had said the statues crack, and then it turned out to be true. As the Jews fled Egypt, two Egyptian guards are seen tossing their rifles down. They later appear among the crowd, having joined them.

#5 A Megalodon makes an appearance (It’s not a whale) You can see a whale through the water when Moses and his followers cross the divided sea (1:22:05). Whale tails, on the other hand, move up and down, but this one’s tail swayed from side to side. According to its size, that’s a Megalodon.

#6 Moses removes his sandals for the rest of the film After God urges Moses to take off his sandals, he stays barefoot for the duration of the movie. The hieroglyphs imply the future of Rameses’ son. They passed away one by one. When the priests sing “You’re Playing With The Big Boys Now,” the audience applauds. They put on a magic performance. They name all of the Gods in their song’s lyrics. With the exception of Heka, the God of Magic. Because the magic was all made up, and it would be insulting to him and the Gods to name him. While chariot racing, Moses, and Rameses knock the Pharaoh’s nose off the monument. Rameses later utilizes the nose as a meeting place. When Moses/God turns the Nile into blood, there is a small space of untainted water surrounding Moses. The soul of Ramses’ son can be seen being snatched in the scene of the smiting of the firstborn. When God passes over the Pharaoh’s palace, a white aura appears, symbolizing the Pharaoh’s soul.

#12 The voice of God was created to avoid controversy To prevent controversy, the voice of God was performed by all of the principal performers in “The Prince of Egypt” (1998). They were instructed to speak in hushed tones so that no one would dominate the performance. However, they needed a louder voice so used Kilmer with the others as whispers beneath his voice.