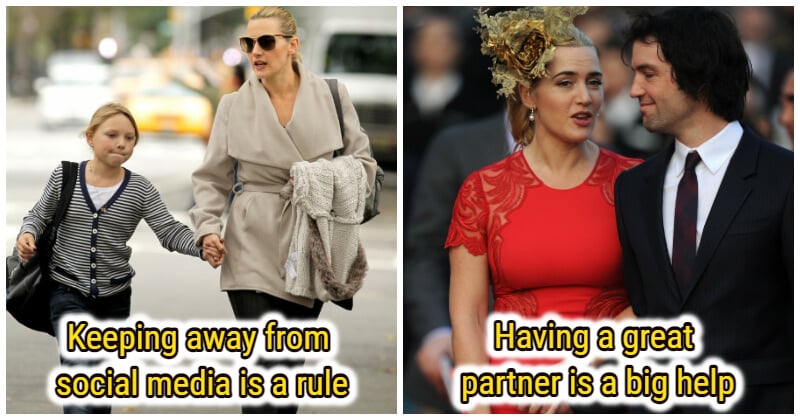 Kate Winslet. We all know her as that redhead from James Cameron’s Titanic. But not only a multiple-award-winning actress, Kate Is also a mom of three kids from three different husbands. Her first child, adorable daughter Mia, she shares with her first husband, Jim Threapleton. Her oldest son, Joe, is with Sam Mendes. Finally, she has a son, Bear Blaze, with her current husband, Edward Abel Smith. That’s one big blended family. And yet, somehow, she just makes it all work.

It takes a strong woman to be able to handle a blended family. Here’s her secret to making all of it work just right.

Kate Winslet is a strong-minded woman Life is an uphill task for single mothers as society is judgmental of them. Winslet’s firstborn, daughter Mia Honey was not even a year old when her marriage to Jim Threapleton ended. Later, she married director Sam Mendes and had a son, Joe Alfie. 9 years later, Winslet was a single mother again but she never let it bring her down.

And then, Winslet summed up what it’s like to be a mom — whether you’re a Hollywood star, a stay-at-home parent, someone who works outside the home, or any combination of the above — in one perfect statement:

“There’s something really empowering about going, ‘Hell, I can do this! I can do this all!’ That’s the wonderful thing about mothers, you can because you must, and you just DO.”
Amen. While we certainly wish for more time and less stress, that is one excellent way of looking at parenthood. Her children are 21, 18, and 8 years old, respectively. That’s quite an age gap to handle and Winslet admitted that it was a challenge with all of her children needing different things from her, emotionally or otherwise. With different ages come different needs, such as different school times, different social circles, and different pick-up times. But nevertheless, she still powers through all of that. Everything you have ever said, posted, or otherwise put onto the Internet will be there forever. Everything. If you’ve posted a mean comment, somebody took a screenshot. If you uploaded a video of you ranting and raving, somebody downloaded it.

And that’s exactly why Kate Winslet notoriously does not use any social media. And as she leads by example, she makes sure that her children don’t use them either. Having a good partner, and a good father figure for your kids is important. That’s why Kate has her current husband, Edward Abel Smith.

Every time she is away, either for shooting a film or just generally occupied, Eddie always takes care of the kids at home.

She likes to do things herself She wants her kids to have a normal childhood, as she thinks that the little things that one remembers from their childhood is the most important.

She has fun with parenting Though parenting can be exhausting, that doesn’t mean anyone can’t have fun with it. And that’s exactly what Kate always strives for. She always does everything with a spring in her step and even when she’s tired, she just keeps trying to get on with it. Kate Winslet’s 46 now, far from being the young Hollywood newcomer. But she feels more confident than ever, and she’s completely fine with all the changes motherhood has brought to her body.
But Winslet was not always body-positive. She used to be bullied in school for her weight.

Having never had positive role models when she was young herself, she tries her best to instill body confidence in her daughter, Mia. It seems to have worked, seeing as Mia is now a certified actress herself. Kate copes with all the tabloids and gossip by simply not caring. She doesn’t care if the media talks about her having 3 kids from 3 different husbands, she can’t be bothered.
And she said so in an interview as well, explaining that no one should have the right to be judgmental about other people, because they do not really know anything about them.

So which one of Kate’s numerous methods do you feel apt as a parent?