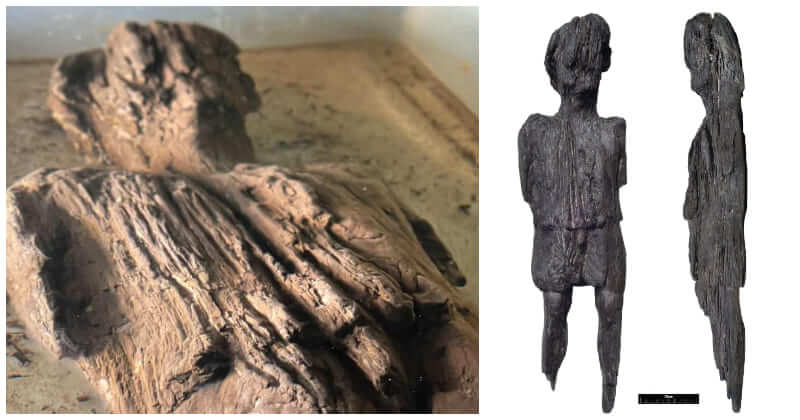 The most unanticipated discovery, an unusual, totally perfectly-preserved wooden effigy from Roman era. Being the earliest of its kind in a century, the find was first set aside as a chunk of degraded wood when it was discovered in Twyford when workers were carrying out their task on HS2 last July.

More detailed examination, however, indicated that the figure has the shape of a human, apparently dressed in a knee-length tunic tied at the waist and wearing either a hat or hair. It is 67 cm (26 inches) tall, with the lowest part of its legs lost, together with its arms below the elbow, and 18 cm (7 inches) wide.

The absence of oxygen in the trench where the figure was discovered, was attributed to the prevention of itself from rotting, helping to conserve it for 2 millennia, according to archaeologists. Though they haven’t found out the true use of the figure, experts think that the wooden effigy might have been sculpted as a form of religious offerings to the gods.

Jim Williams, Historic England’s senior science advisor, believed that “This is a truly remarkable find that brings us face to face with our past. The quality of the carving is exquisite and the figure is all the more exciting because organic objects from this period rarely survive.”

Within the same site, shards of pottery from roughly 43-70 AD. Meanwhile, experts are intending to carry out radiocarbon dating on a small fragment of the wood that was already broken off the carving before it was uncovered from the ditch, to provide a precise age for itself.

“Not only is the survival of a wooden figure like this extremely rare for the Roman period in Britain, but it also raises new questions about this site,” claimed archaeologist Iain Williamson of HS2’s Enabling Works Contractor, Fusion JV.

He also continued with a profound question: “Who does the wooden figure represent, what was it used for and why was it significant to the people living in this part of Buckinghamshire during the 1st century AD?”

The effigy is now undergoing deeper inspection and preserved in laboratory by scientists from York Archaeology. It’s nearly impossible for sculpted wooden effigies from Britain’s ancient and Roman era to last until modern times.

The last such find, the ‘Dagenham Idol’, dated to 2250 BC — was retrieved from the north bank of the Thames back in 1922. In 2019, a Roman-era wooden arm believed to have been sculpted as a religious tribute was discovered at the bottom of a well in Northampton.