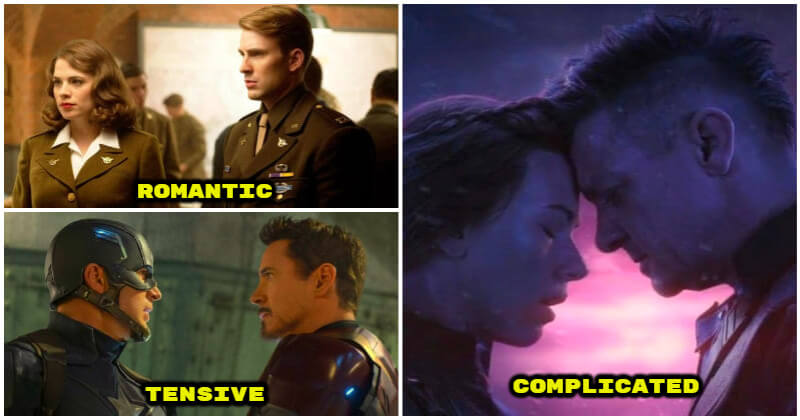 After 27 movies, MCU has been introducing over a hundred characters, from antagonists to protagonists, which means there is a link (including love, friendship, soulmate) among these characters. And it is indisputable the importance of the chemistry among characters in the film. Because owing to these, the audience could have a comprehensive understanding of each character and derive more types of emotions.

We all know that MCU is famous for action-packed, intense scenes and extraordinary battles. But still, they didn’t forget to bring some romantic moments that even made the audience burst into tears. Below are ten relationships in the MCU that we want to bring you. While some of them are obviously visible, others only bizarre existed in fands’ minds. The tragedy that Steve had to overcome is not having a chance to continue their romantic relationship with Peggy due to due to Steve’s apparent death on the ice during the war. Fortunately, after the End game, he finally had a chance to do it after traveling back in the time. Even though they share very little time together, fans still love Yelena and Kate’s friendly quarrel and their shared love for mac and cheese. The love story between Wanda and Vision is one of the most tragic and memorable hooks in the MCU. Consequently, fans have taken it upon themselves to fix it via fanart and fanfiction. These two characters only have a conversation in Thor in few minutes and in The Avengers prequel comic, but Coulson and Clint have shared many moments in the comics too. For example, they share an emotional hug over Nick Fury’s fate in Secret Avengers. Even though both of them just interact for a few moments in the comic panel Captain America: The Winter Soldier and the scene didn’t make it into the movie, it can’t stop fans give birth to the ship between them, which is enough to see their relationship in the comics is impossible to ignore. Visibly throughout Marvel movies, Clint and Natasha time and time worrying about each other and share stories about their past experiences. But in Avengers: Age of Ultron, when it became obvious that Natasha and Bruce had a thing, and that Clint was married to Laura all along. In fact, the movie received a lot of backlash for this. Notably, this ship’s appeal comes from the fact that they resent each other, but can’t help but protect one another.

The relationship between them is one of the most wholesome things in the MCU. After Pepper and Tony have spent a lot of years together, they have a daughter, Morgan. Tragically, fans were heartbroken after Tony died in Avengers: Endgame. Tony Stark and Steve Rogers can’t help disagreeing on almost everything. As a result, The friendship between Iron Man and Captain America is strong, but it’s also filled with a general tension. Eventually, they still keep abreast to each other and do the greatness.

Since Bucky first appeared in the comics as Captain America’s sidekick and both of them had ups and downs throughout movies, he and Steve Rogers have shared one of the strongest friendships in the Marvel Universe.