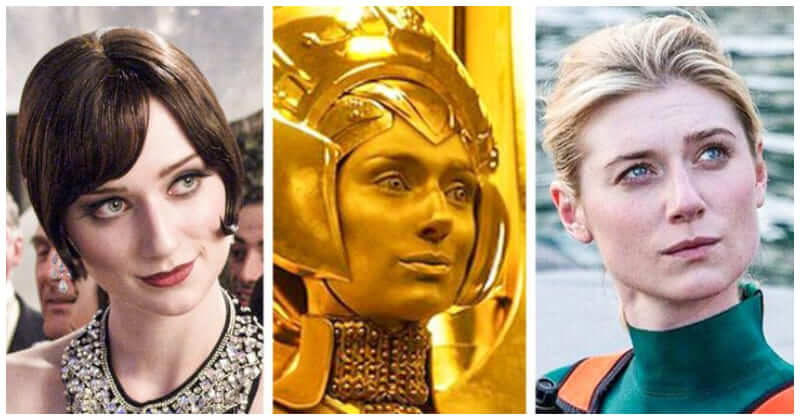 Have you ever been surprised (or even left in awe) when you watch the credits that roll at the end of a movie?

In the film industry, famous actors have many magical transformations through each movie. They have to play many different roles, ranging from good to bad, young to old, and even transforming into aliens throughout the movie. The advancements in the field of make-up have made it possible for actors to try out any role. Besides, the magic of makeup is making actors look so convincing in their roles that we forget that these people we see on the screen don’t exist in real life. And sometimes it may leave us in shock as we do not recognize our favorite actors until we look at the credits.

The following is a list of famous A-list actors hiding in their roles without your being aware of it. Take a closer look! Do you think you would be able to recognize them without help?

#1 Meryl Streep from Angels in America Meryl Streep’s brilliance is undeniable, but the fact that she portrayed four separate parts in the movie Angels in America miniseries is amazing. It’s hard to recognize the actress when she’s playing a rabbi.

#2 Vincent D`Onofrio from Men in Black Hardly anyone will be able to recognize Vincent D`Onofrio in the Men in Black movie. He played the role of the farmer Edgar, who was possessed by an alien. Vincent D`Onofrio looks very different in this new hairstyle. He gained roughly 70 pounds to play a soldier in the film Full Metal Jacket, proving that he is a real Hollywood hottie.

#4 Miley Cyrus in Guardians of the Galaxy Vol. 2 If you didn’t look at the movie’s credits, would you recognize Miley Cyrus? In Guardians of the Galaxy Vol. 2, she voiced over Mainframe — the artificial intellect that ruled the entire planet.

#5 Elizabeth Debicki in Guardians of the Galaxy Vol. 2, The Great Gatsby & Tenet Do you remember the golden-faced girl from Guardians of the Galaxy Vol. 2? A golfer in The Great Gatsby, perhaps? Elizabeth Debicki is the star of Christopher Nolan’s latest film Tenet.  The director outlined the actress’s skill to transform well, “Elizabeth’s one of these great actors who, when they’re brought to your attention, you realize you’ve seen them in a lot of things but you’ve not realized it’s the same person.” Christian Bale has shared his method of gaining weight to suit the role. The photo below shows him in the movie Vice together with his co-star Amy Adams. “I had been eating ‘lots of pies’ to look like former VP Dick,” the actor said in one of his interviews.

#7 Bryan Cranston in Twas the Night Bryan Cranston, the main actor in the Breaking Bad series, will be hard to recognize in the character of a normal person who had to fill in for Santa Claus. It’s the actor’s first leading role. Twas the Night is the title of the film. #9 Joseph Gordon-Levitt in Knives Out Joseph Gordon-Levitt continued to hide in another movie called Knives Out and directed by Rian Johnson. The actor did not appear on the screen, but his voice could be heard towards the opening of the film when the main character’s sister is watching a movie and the actor says, “We have the nanny cam footage.” Mariah Carey plays the girl from social services in the film Precious, who has a small beard and untidy hair.

#11 Edward Norton in Kingdom of Heaven Viewers cannot recognize who he is without looking at the film’s character list! One of the principal characters in Ridley Scott’s drama Kingdom of Heaven was portrayed by Edward Norton, who was barely seen on the screen. All because the performer wore a mask that covered his face for the entire movie.

#12 Bernard Hill in Titanic & The Lord of the Rings Source: © Titanic / Twentieth Century Fox, © The Lord of the Rings: The Return of the King / New Line Cinema

Only now did I discover this: Both the captain of Titanic and Théoden from The Lord of the Rings: The Return of the King were played by Bernard Hill. Kate Mara had an appearance in another Marvel production before becoming the Invisible Woman from Fantastic Four. The actress made an impression in a tiny moment in Iron Man 2’s second season, as she played a marshal who served Tony Stark with a subpoena. Joe Russo, one of the Avengers’ founders, enjoys acting in his films. He has portrayed four distinct parts in this superhero series, and some of them are difficult to distinguish. In Captain America: The Winter Soldier, he looked like this.

#15 Harry Dean Stanton in The Green Mile, Alien & The Avengers It’s hard to spot him! Harry Dean Stanton, known for David Lynch’s and Martin Scorsese’s flicks, as well as his roles in The Green Mile, Alien and The Avengers movies. Despite the fact that it was merely a one-second comedy part, it was unforgettable. See more interesting roles of Harry Dean Stanton, have you been familiar with him? The actor was consistently cast in supporting and episodic roles, which drew the attention of the audience. He looks terrific as the main character in the film Paris, Texas, as a death row convict in The Green Mile with a loose screw, and as a man with a black hat in Seven Psychopaths. David Thewlis is best known for his performance as Remus Lupin in the Harry Potter films. However, he is difficult to distinguish in the film The Big Lebowski. He played Julianne Moore’s main character’s buddy in the film. This is Laurence Fishburne in the military drama Apocalypse Now. Do you recognize him in this style? Steve Carell is likewise hardly noticeable in Curly Sue, where he plays a waiter. By the way, that was the actor’s first appearance in a film. It was unexpected that the one-eyed pirate named Ragetti in The Pirates of the Caribbean movie series and the seller of newspapers in Christopher Robin are the same person. The actor who portrayed both of these characters is Mackenzie Crook.

#21 Laura Haddock in Captain America: The First Avenger & Guardians of the Galaxy Laura Haddock, star of the series Da Vinci’s Demons and White Lines, frequently appears in Marvel films in episodic roles. In Captain America: The First Avenger, she was a fan with an autograph, and in Guardians of the Galaxy, she was the mother of Star-Lord, who appears in his recollections.