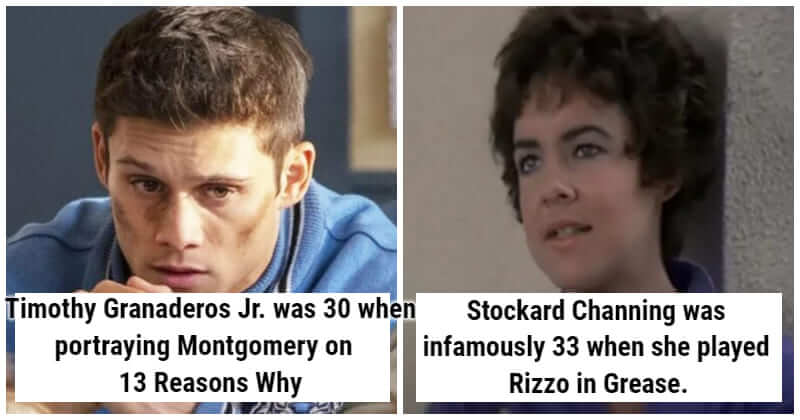 In case you do not know, many Hollywood crews prefer to pick actors in their twenties to play teenagers. This is understandable because labor laws set limits on the number of working hours of people under 18. In addition, the more mature stars are, the more experienced and trained they are likely to be. So, it seems to be advantageous to invite celebrities who are over 20 to play adolescent roles. But sometimes, thespians in their thirties are also chosen to portray juveniles. And it can surprise you as some actors are twice as old as the characters they perform!

Hence, below, we have listed 21 times Hollywood cast celebrities over the age of 30 to play teenagers. Let’s see if teen roles fit them or not!

#1 Bianca Lawson started playing high school student Maya in Pretty Little Liars when she was 31 and was 33 when she last appeared in this series. #2 Greta Onieogou, who plays high school student Layla in All American, is currently 30. #3 Stockard Channing was 33 when she played Rizzo, an older teenage girl, in Grease. #4 Jamie Donnelly, who played Jan – a high schooler – in Grease, was 31 when this film was released. #5 Andrew Garfield, who played a graduated high school student in The Amazing Spider-Man 2, was 30 when this film came out. #6 Wood Harris was 30 when he played Julius Campbell, a high school football star, in Remember the Titans. #7 Efren Ramirez was 30 when he played Pedro (a high school foreign exchange student) in Napoleon Dynamite. #8 Trevor Donovan was 30 when he first appeared as a high school student in season 2 of 90210. He was 32 when his character graduated. #9 Ross Butler, who played high school student Zach Dempsey in 13 Reasons Why, was 30 by the time this show ended (at the end of high school). #10 Ashleigh Murray was 31 when she last appeared as a high school student on Riverdale. #11 Alexa Demie has never publicly revealed her age, but she appears to be 31 (based on her yearbook) when she played a high school student in Euphoria. #12 Lucy Hale was 30 when she played Katy Keene, a 20-something aspiring fashion designer, in Riverdale. #13 Timothy Granaderos Jr., who played high school student Montgomery in 13 Reasons Why, was 30 when the show was released. #14 Michael Steger, who played student Navid in 90210, was 30 by the time the season in which his character was in the senior year came out. #15 Jason Earles, who played 16-year-old Jackson in Hannah Montana, was 30 when season 2 of this series aired. #16 Ser’Darius Blain was 30 when Jumanji: Welcome to the Jungle was released, playing a high schooler. #17 Harry Shum Jr. was 30 when his character (Mike) graduated high school in Glee. #19 Stacey Dash was 32 when her character graduated high school in Clueless. #21 Darren Barnet, who played high school student Paxton in Never Have I Ever, was 30 when season 2 of this series aired.