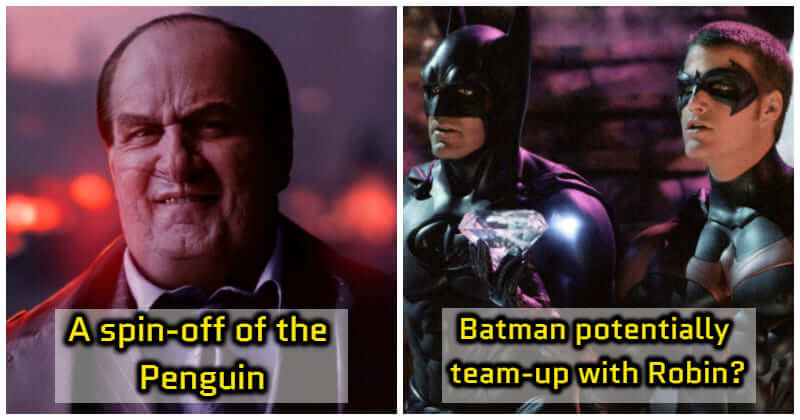 Around a month ago, after a 2-year hiatus of Covid, The Batman 2022 was expected to be one of the blockbusters released in the year. Fortunately, it virtually meets the expectation and even brings people a new universe in Gotham City.

That started to arouse fans’ curiosity and hopes for imminent things. As a result, they have been giving birth to new theories that could happen in the future. The world Matt Reeves created feels so grounded in reality, yet still open to the distinctly fantastical possibilities present in comic book stories. At this point, it looks like there will be two sequels and a few spin-off series on HBO Max focusing on the Penguin, Catwoman, and Arkham Asylum

8. Potential Of A Penguin Spin-Off Colin Farrell reportedly helms his own spin-off series for HBO Max as Oswald Cobblepot aka the Penguin even before The Batman was released. In this continuity, he is serving as Carmine Falcone’s right-hand man and running the Iceberg Lounge, not yet a crime boss in Gotham City. At the film’s end, though, now with no one pulling his strings anymore, he is ready to lay claim to this new submerged city. Although The Batman gives a strong introduction to Farrell as the Penguin, there is still much to explore, making the spin-off series ripe with possibilities. It is being set up as following the film as a villainous origin story in Cobblepot truly becoming the Penguin and using the title with pride – since he hates it so far. Nevertheless, it will also need to explain his upbringing, scars, and how he came into the employ of Falcone.

6. What Will Catwoman Do? Closely following the release of The Batman it was announced that a TV show following Zoë Kravitz as Selina Kyle aka Catwoman for HBO Max. This has yet to be fully confirmed, but fans have high hopes after Kravitz’s scene-stealing and captivating performance. Interestingly, she never actually goes by Catwoman in the film, only going so far to refer to herself as the Cat once, so, like the Penguin’s series, this will likely be an origin-style series culminating in her adopting the title and antihero lifestyle. In a particularly poignant easter egg near the end of the DC film the word Hush while the Riddler mentions a reporter named Edward Elliot in a clear reference to the villain. The Riddler and Hush are linked together in the comics and other films, and while this could just have been a simple nod to the source material, it seems like it could be more. Many expect Thomas Elliot aka Hush, a childhood friend of Bruce Wayne, to show up in Reeves’ Batverse. There hasn’t been a live-action Batman and Robin team-up story since the ill-fated and maligned Batman and Robin – though The Dark Knight Rises made a cheeky nod to the relationship with Joseph Gordon Levitt’s character. Nevertheless, it is something fans are eagerly hoping for in the future, and some even thought they set it up already with the mayor’s son, but Reeves has denied this. Batman’s rogues gallery is legendary of course with the likes of Joker, Riddler, Bane, and Poison Ivy to name a few. Some fit in more naturally with the world Reeves developed and even the cast has ideas and hopes for who Batman will cross paths with in the future. A leading theory suggests that the enigmatic and mysterious organization known as the Court of Owls and Talon are likely options. The Bat-Man 2022 reveals that Thomas inadvertently had journalist Edward Elliott killed after he threatened to expose Martha’s history with mental illness and time in Arkham Asylum. In the end, this likely got Wayne’s murdered, as they in turn could expose Carmine Falcone for his involvement in Elliott’s death. In an exciting sequence following the climax, Dano’s Riddler meets a fellow prisoner at Arkham Asylum. This “unnamed Arkham inmate” as they’re credited was played by Eternals’ Barry Keoghan and was later confirmed to be the Joker. However, Reeves has further stated that he has not fully become the Joker yet, though he has crossed paths with Pattinson’s Batman already. Nevertheless, now fans are expecting Keoghan to play an integral role in future installments.