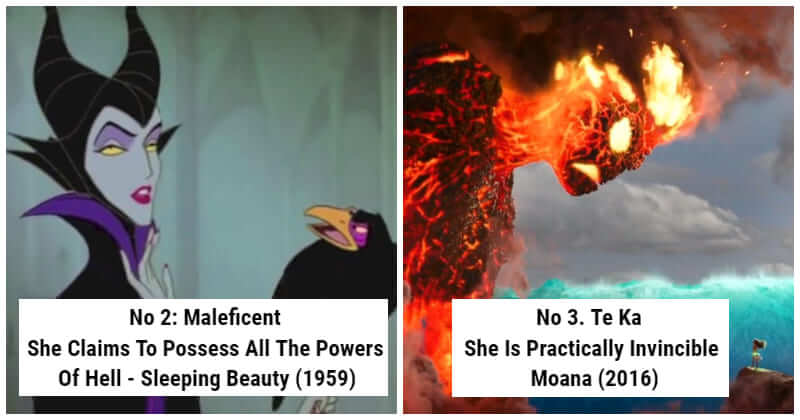 Disney is one of the most iconic figures in pop culture. Disney movies always leave an indelible mark on the audience. When it comes to Disney movies, most of us think of beautiful princesses and funny animals. But did you know that the key to highlighting the image of the main characters is the villains? Especially the female villains with a somewhat bizarre and scary appearance like Ursula from “The Little Mermaid”, Cruella de Vil from “101 Dalmatians”, Maleficent from “Sleeping Beauty”. All of them are portrayed as cruel, cunning, and possessing great power that is hard to defeat. So who is the strongest among them?

The following is a ranking of the 10 most powerful Disney villains. Keep reading to find out who they are and let me know which evil Disney characters is your favorite! The most powerful Disney villain of all time belongs to Chernabog. Chernabog is a dangerous demon described as Satan. He is the embodiment of evil and uses evil to maintain power. In Fantasia 2000, Chernabog was replaced by The Firebird. He flew up from the pit of hell surrounded by hot lava and sharp eyes. Both Chernabog and The Firebird possess unparalleled strength.

#2 In Sleeping Beauty (1959), Maleficent claims to possess all the powers of Hell. First appearing in the animated version of Sleeping Beauty in 1959, Maleficent was such a force to behold that she became the star of her own live-action series. She uses all the powers from hell with curses and teleportation magic, creating lightning, summoning storms, and hypnosis. Even though the Good Fairies are unable to emancipate Princess Aurora from Maleficent’s spindle-based curse. Te Ka is quite literally a heartless and destructive creature with a fiery disposition. The theft of her heart has stripped her of Te Fiti’s benevolence, replacing it with malice aimed at both Maui and the world at large. Te Ka and Te Fiti are polar opposites with opposing purposes and beliefs; whereas Te Fiti strives to spread life and beauty, Te Ka seeks to promote death and corruption, merely because he believes mankind is undeserving of Te Fiti’s gifts. Te Ka can be painted as a vindictive entity.

#4 Hades in Hercules (1997) has several divine gifts at his disposal. Hades is the lord of hell in Greek mythology. He is like the devil, extremely cruel, and is the main enemy of Hercules. Hades spent nearly two decades fighting his brother, Zeus, to take over Mount Olympus. Hades is dangerous in that he is immortal and has the power to rule over the souls of the dead, commanding them to do as he pleases.

#5 Dr. Facilier’s Petro Voodoo in The Princess And The Frog (2009) makes him a formidable opponent. Dr. Facilier is a gifted magician whose spells are rooted in his voodoo-derived trappings. He has semi-oracular abilities, but instead of foretelling the future, he uses his Tarot deck to dupe his victims into believing in a false fate if they take the bait.

#6 Madam Mim in The Sword In The Stone (1963) is capable of shapeshifting, teleportation, and invisibility. Madam Mim, another villain, is a hesitant acquaintance of Merlin. She fights a wizards’ battle with Arthur and exposes her range of abilities. She is a hater of all nice things. Along with her typical spellwork, she can transform herself into a number of animals, including a dragon. Despite the fact that becoming a real dragon is a huge show of power, she is vanquished by Merlin, who transforms into a microbe before infecting her. She also refuses to go outside in the sunshine.

#7 In The Little Mermaid (1989), Ursula’s power is magnified after she acquires Triton’s trident. Ursula is a wicked sea witch who allows Ariel, a mermaid princess, to transform into a human for three days in order to win Prince Eric’s love. Besides being a master of magic potions, Ursula has ambition, brilliance, magic, and ruthlessness on her side. She makes use of what she has and manipulates the game to her favor. She could have ruled the waves if she had only kept an eye on Eric and the ship.

#8 In Mulan (1998), Shan Yu’s unbreakable willpower is his most dangerous feature. With his thin face and yellow eyes, the leader of the Hun army in Mulan was terrifying to watch. The movie is really about the dire hardships that China is going through because of him. Shan Yu is not only a great military leader, but he’s also a brilliant survivalist; even honed his senses to be able to detect the presence of unseen Imperial spies nearby. This is demonstrated as he can break through armored doors, break through rooftops, and can cut through stone pillars like butter, he can also have super strength.

#9 In Aladdin (1992), Jafar becomes the most powerful sorcerer in the world. Jafar is one of the most terrifying characters in the franchise. This power-hungry antagonist is cunning and devious. He develops his terrible machinations slowly, waiting for everything to fall into place. However, in the end, his ambition is ultimately what defeats him.

#10 In The Incredibles (2004), Syndrome’s scientific brilliance is unparalleled. The only thing that Syndrome possesses is his intelligence, but it’s enough to handle superheroes at the Parr family level. He’s built and reverse-engineered countless forms of technology, including Quantum Energy Generating Utility Gloves and electric field prisons. Syndrome’s greatest creation, the Omnidroid, is nearly unstoppable. However, the tenth version of this combat robot is so powerful that it can only be defeated by itself, a drawback that Mr. Incredible inevitably takes advantage of.