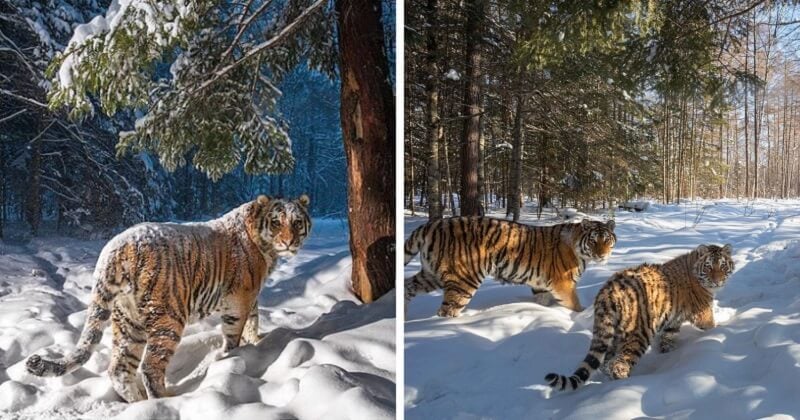 Sascha Fonseca is a wildlife photographer who specializes in DSLR camera traps. He was born in Germany but moved to Dubai to turn his passion for animals into a career. In December 2021, Sascha set up a camera trap in eastern Russia’s birch forests and captured an incredible photo of an ultra-rare Siberian tiger in its natural environment. Sascha shares that DSLR camera traps allow him to capture an unparalleled view of wildlife which he would otherwise not be able to get. He also states that setting a camera trap is not easy as everyone thinks.

“Tigers are mostly nocturnal which means they are active mostly during the night. You could spend months or even years staked out and not capture a single image. Camera traps can,” Fonseca shared. Thanks to his expertise with camera traps, he captured footage of an undocumented male Siberian tiger. As a special gift to Fonseca for photographing the newly discovered creature, researchers allowed him to name the tiger. In thinking of a name for the animal, Fonseca noticed a distinctive L pattern on his cheekbone and decided to settle on the name Leo. Through this name, he also wants to honor the Russian author Leo Tolstoy. “A male Siberian tiger passed by my camera trap deep in the forests of Far East Russia,” Fonseca said. “It turned out that it’s an unknown male which had not been documented yet. So, the researchers I worked with during my camera trap project invited me to give him a name. It’s a special honor and it connects you with the animal on a personal level.”

Siberian tigers are the world’s largest tigers and are found primarily in the Far East of Russia, the Northeast of China, and North Korea. Widespread poaching of Siberian tigers has pushed them to the brink of extinction. Now, they are among those listed as critically endangered with less than 400 individuals left in the wild. Through his work, Fonseca hopes to raise awareness of protecting animals and their environment.

Meet Koyuki, The Grumpy Cat From Japan Who’s Even Grumpier Than The Original One