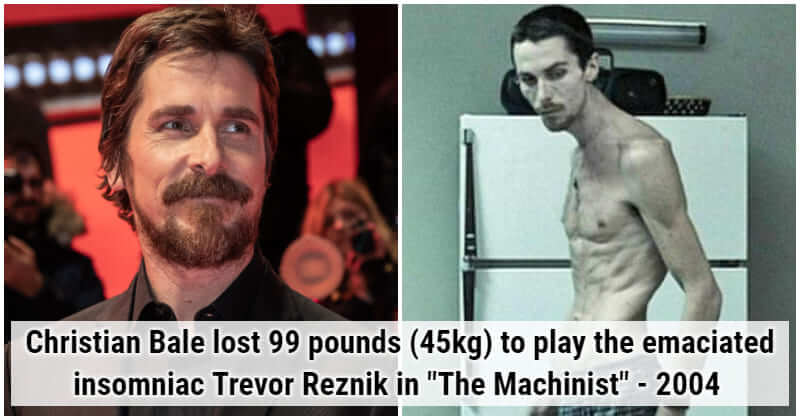 The road to stardom is never a bed of roses. It’s completely true for those who have been working in the film industry. To survive and make a name for themselves in this competitive (cutthroat) environment, the actors need constant efforts to advance their acting skills. More importantly, they work with passion and persistence. Thus, they dare to go above and beyond to win their roles. This is also what creates a fine line between big stars and mediocre actors.

Our actors made it big with their tremendous effort. However, some famous actors have taken things too far for a role. Have you ever heard of a technique called “Method Acting”? It enables the actors to play roles based on their own experiences, feelings, and emotions. It appears to be fascinating, right? Everything has side effects, guys. The acting practice causes self-harm, some actors even need to see a therapist.

Did you know that Christian Bale lost 55 pounds (25 kgs) in four months to play Trevor Reznik or Heath Ledger locked himself away for weeks to play Joker? These legendary celebrities sacrificed for their roles. There are more actors who have done the same thing. Scroll down and check the list below!

#1 Christian Bale made an incredible transformation in 2004’s The Machinist. He lost 99 pounds (45kg) to play the emaciated insomniac Trevor Reznik #2 Nicolas Cage was devoted to his portrayal of Alfonso “Al” Columbato in the movie Bird (1984). He pulled out his teeth for real. #4 Adrien Brody played the musician Władysław Szpilman in the 2002 movie The Pianist. To prepare for his role, the actor lost 30 pounds (13.6kg, moved out from his apartment , gave up his car and disconnected from the world

#5 To catch the insanity of Joker (The Dark Knight (2008)), Heath Ledger locked himself away for weeks. His hard work paid off as he won Academy Award for Best Supporting Actor #6 Hilary Swank nailed her role in “Million Dollar Baby”. The actress trained 6 times a week, gaining 19 pounds of muscle mass although the producers’ expectation was only 10 pounds. #7 Michael B. Jordan nailed the role of Killmonger in the Black Panther movie. To comprehend his character, the actor completely isolated himself from people #8 To match his role of Steve Jobs in the movie Jobs (2013), Ashton Cutcher followed the billionaire’s diet. As a result, he was hospitalized twice because of pancreatitis #10 Are you obsessed with the scene Ephraim Winslow (Robert Pattinson) sitting on the floor growling and licking up puddles of mud in The Lighthouse (2019)? The actor was completely devoted to his role.

#11 To get the role of Raoul Duke (Fear And Loathing In Las Vegas), Johnny Depp moved into the basement of Thompson’s Aspen house for several months #12 Sylvester Stallone is synonymous with the popular franchise, Rocky. To convince this role, the actor followed a very strict diet and exercising regime. While filming Rocky IV, Sylvester Stallone asked his co-star, Dolph Lundgren, to punch him with all his might. The result is he was sent to the hospital. #14 Robert De Niro got a real taxi driver’s license, working at a cab firm in New York for a month before the filming started #15 It can be said that Shia LaBeouf is one of the craziest role players. He pulled his completely healthy tooth when portraying Technician fifth grade Boyd “Bible” Swan, tunk gunner in the 2014 movie Fury.