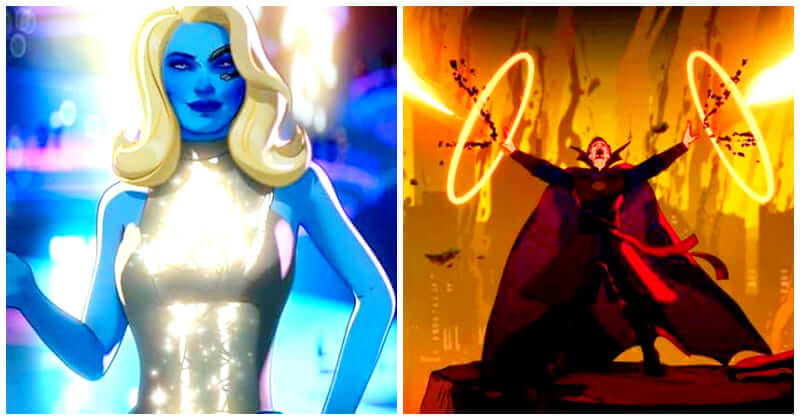 In the newly established Marvel Cinematic Multiverse, it doesn’t require a metamorphosis into one of Marvel’s What If…? zombies to suffer a major character makeover. That’s just one of countless What If…? remix moments, and if the cartoon series has taught us anything, it’s those minor decisions may have huge consequences.

The finest What If…? episodes are those in which the narrative changes are limited – ideally down to a single amended decision – yet the character paths vary dramatically. After all, what good is it to see different versions of your favorite characters if they don’t, like, alternate? Through some past conversation, T’Challa was able to talk Thanos down from his mission of universal halving – if not to give up on its merits entirely – and now Thanos is a loyal member of Star-Lord’s Ravager crew.

#2 Loki Remains With The Frost Giants And Becommences To Feel At Home In His Own Skin. Not only is this Loki closer with Thor without their familial relation, but he’s also clearly tight with his “Ice-Bros,” some of whom are presumably fellow offspring of Laufey. In this universe, Loki has finally found a family that he feels accepts him, and that’s something he never really found in the mainstream Marvel Cinematic Universe.

#3 Without her bad father weighing her down, Nebula discovers her inner Femme Fatale. In this reality, Thanos is convinced early on in his mad campaign to take a more peaceful path, and that frees Nebula from his thrall before he’s completed all but a few of her forced modifications. She’s got her natural blond hair, her individual agency, and far more of her authentic personality than MCU audiences have ever seen before.

#4 After the death of his daughter, Hank Pym transforms into a homicidal villain. #5 Without Christine Palmer in his life, Doctor Strange becomes hell-bent on breaking the universe. An entire universe perishes because Christine Palmer does – or, more specifically, because Stephen Strange can’t let her go. Strange studies the mystic arts for the express purpose of bringing her back to life, undeterred, Strange breaks the laws of time, space, and dimensions.

#6 With the Hydra-Stomper to save him, Bucky never becomes the Winter Soldier. Without the weight of those awful experiences on him, this Bucky’s sense of humor is a lot less dark, and his pluckiness really comes to the forefront. And he has lived a significantly more charming kind of life.

#7 When Wanda Maximoff turns into a zombie, Vision traps his allies for food. Vision decides to keep the zombified Wanda locked up, and to start luring in healthy individuals for her to consume. He justifies it by reasoning that there’s still hope for a cure, and that he’s just keeping Wanda “alive” until then, but pretty soon, he’s trapping his allies as Wanda snacks, and even he can see through his own delusions by that point.

#8 An Earthbound Star-Lord works at a Burger Joint in his hometown. Peter Quill’s seemingly normal life working at Dairy Queen is exactly what would happen if he never went to space. Yet he’s still got all the same attributes and qualities that opened up the starways to the original MCU Star-Lord.

#9 Instead of living long enough to become a villain, Sharon Carter dies as a hero. In this universe, Sharon fights alongside a handful of survivors attempting to right the world. She gives her life in combat eventually, but her sacrifice allows the others to escape and head toward Camp Lehigh

#10 Kurt Goreshter Is Proved To Be A Zombie Apocalypse Hero. Kurt Goreshter’s résumé largely consists of a supporting role in various Ant-Man-related capers. But in What If, Kurt keeps the survivors’ spirits high, fights semi-bravely alongside them, it’s impressive enough that he even makes it so far. Party Thor boogies down with Frost Giants, Skrulls, the Sovereign, and even Surtur himself. It’s all played for laughs, but the Nine Realms must be relatively peaceful and united for it to be a reality, and that must be the work of Thor.

When Tony still nearly perishes in Afghanistan, only to be immediately rescued by Erik “Killmonger” Stevens. Stark becomes an even bigger war profiteer, constructing an army of vibranium-powered mechs that will presumably be sold to the United States military. After he’s done smacking Pym around, Loki decides to stay on Midgard and become its ruler. And just like that his big dream is achieved. Without the Avengers around to stop him, this Loki finds his stride and carries it all the way to the throne he’s always wanted.